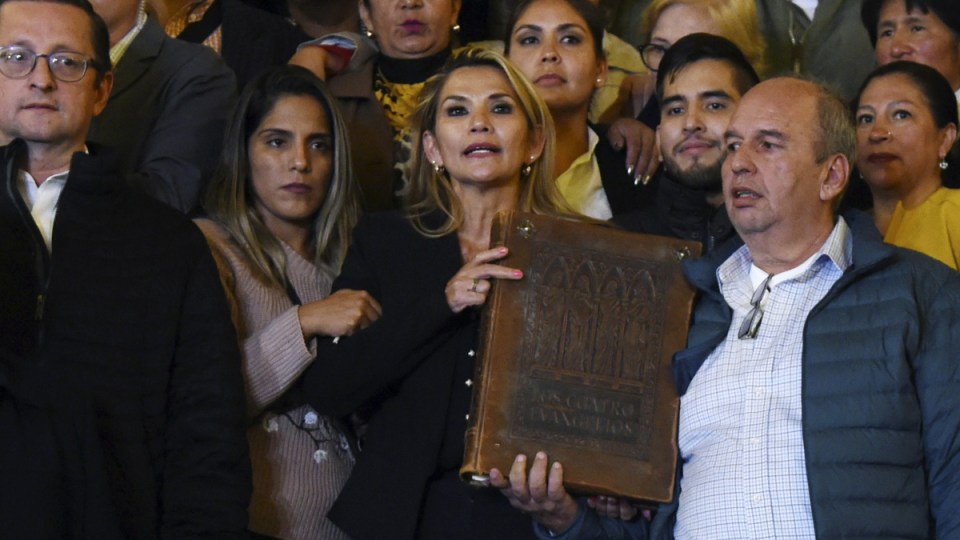 Jeanine Anez has declared herself Bolivia's interim president after Evo Morales resigned and went to Mexico to take up an offer of asylum. Photo: Getty

Bolivian opposition Senator Jeanine Anez has declared herself the country’s interim president after former president Evo Morales and his vice president went into exile in Mexico.

“I assume the presidency of the state,” the 52-year-old lawyer told the Senate.

She pledged to “pacify” the country, which has faced weeks of violent protests, and to stage new elections “as soon as possible.”

Earlier in the day, Mr Morales arrived in Mexico, which granted him asylum on the grounds that his life could be in danger.

His departure after more than 13 years at the helm, coupled with a string of high-profile political resignations, plunged the Andean country into uncertainty.

“As long as I’m alive, we’ll continue doing politics,” Mr Morales told journalists at Mexico City airport, as he accused the opposition of having ousted him through a “coup” and thanked Mexico for saving his life by offering him asylum.

Bolivia’s Congress was meanwhile due to appoint his successor, but both of its chambers failed to muster the presence of a sufficient number of lawmakers to take decisions, leading to Ms Anez declaring herself president.

She said the lack of a quorum was due to the absence of legislators from Mr Morales’ MAS party, which has a majority in parliament.

But Mr Morales called her announcement “the most disastrous … coup in history.”

He said on Twitter that the “right-wing” senator had taken power “without a legislative quorum, surrounded by a group of accomplices” with the support of the army and the police “who repress the people.”

Large numbers of soldiers were deployed to prevent violence, with tanks and armoured vehicles standing on the streets while military planes flew low above the capital La Paz.

Prosecutors meanwhile said that seven people had been killed in the protest wave, up from the previously reported three, daily El Deber said.