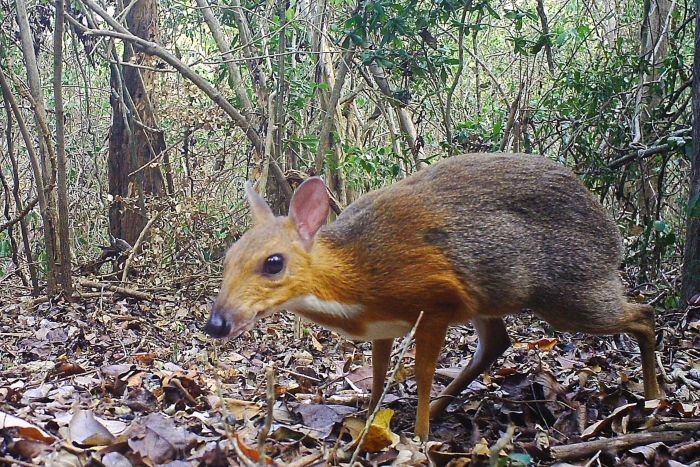 The last silver-backed chevrotain was seen in the 1990s. Photo: Andrew Tilker

With so many stories of animals going extinct these days it’s rare to get some good news.

But researchers working in lowland forest near Nha Trang in south-east Vietnam have captured the first-ever photos of a silver-backed chevrotain or “mouse-deer”, which conservationists feared was extinct.

The small deer-like species of ungulate was last seen in the early 1990s, and was feared to have been wiped out by extensive land clearing and poaching across its known habitat, researchers wrote in a paper published in Nature Ecology & Evolution today.

While its small and fragmented population means the animal is still highly vulnerable to extinction, it’s a “heartwarming” find according to James Watson, director of the Centre for Biodiversity and Conservation Science at the University of Queensland.

“[The silver-backed chevrotain] was mythical. People talked for years about whether it existed or not,” said Professor Watson, who wasn’t involved in the study.

“This shows there are still things hanging on and they’re not found in these really large protected areas, they’re found in these small patches of habitat.”

Prior to these images, the animal was only known from a handful of dead specimens and local reports.

The tiny silver-backed chevrotain, which superficially resembles a small deer, gets its name from the grey and white flecked fur on the back half of its body.

Because it is so rare, the International Union for the Conservation of Nature lists its conservation status as “data deficient”.

Conservationists burning out from seeing loss every day

The research team suspected the animal may still occur in the forests near Nha Trang, after interviewing locals in the region who reported seeing chevrotains with grey backs.

So they set up camera traps — cameras triggered by movement — at three sites in early 2018.

When they retrieved their cameras in April of that year, all three contained images of the animals.

They then increased the number of camera traps to 29, and recorded animals on 15 of 29 cameras between April and July.

Their findings suggest that, at least within this small region, the species may be locally abundant.

However, they stress the need for more research to investigate whether there are other populations across Vietnam.

“We also recommend assessing the major threats in areas in which the species has been confirmed, as a first step in developing mitigation strategies with local stakeholders,” they wrote.

Good news stories like this one are really important for conservationists, who are burning out on the seemingly relentless decline of the natural world, according to Professor Watson.

“Unfortunately the news is so often bad because the state of the planet is terrible,” said Professor Watson, who is also the director of science and research at the Wildlife Conservation Society.

“Most conservationists I think are manically depressed. I really do, because we see loss every day.

“So anything that makes you go, ‘wow, that’s unexpected but lovely’, it warms the heart.”

He thinks that the ecology of the silver-backed chevrotain means that it has a good chance of recovery, if the key threats are removed.

“They’re rapid breeders, so the good news is that if you can get habitat loss and hunting under control, it’s got a good chance at bouncing back.”