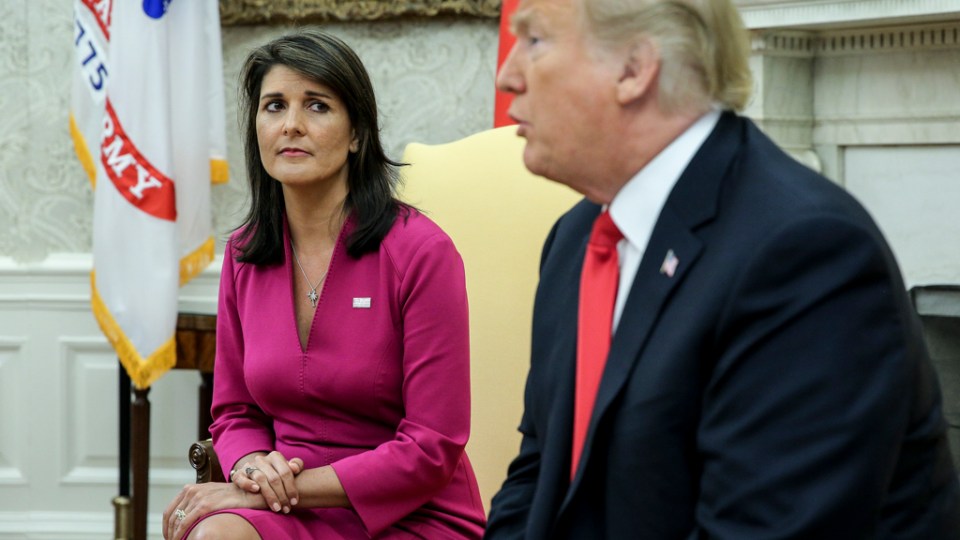 Nikki Haley claims Rex Tillerson and John Kelly tried to recruit her in undermining Donald Trump, to 'save the country". Photo: AAP

Ms Haley’s new book, due to be published in the US on Tuesday (local time), claims the former Secretary of State Tillerson and Trump’s ex-chief of staff Kelly wanted to undermine Mr Trump’s authority in a bid to “save the country,”

Ms Haley addressed the comments in an interview with broadcaster CBS on Sunday.

“To undermine a president is really a dangerous thing and it is against the constitution and against what the Americans want,” Haley told CBS.

Mr Tillerson was fired in March 2018, while Mr Kelly left at the end the same year.

In response, Mr Kelly said if providing the president “with the best and most open, legal and ethical staffing advice …so he could make an informed decision is ‘working against Trump,’ then guilty as charged.”

The Trump White House has seen an unusually high number of sackings and resignations.

Some former White House staffers have painted a picture of chaos in the government in insider reports and revelatory books.

It was Ms Haley’s choice to end her posting at the United Nations in New York at the end of 2018. Rumours swirled about her political ambitions, with many speculating she had an eye on a future presidential run.

.@NikkiHaley is out with a new book, “With All Due Respect” this week. Make sure you order your copy today, or stop by one of her book tour stops to get a copy and say hello. Good luck Nikki! https://t.co/uHKAAlVuLt

US officials tried to ‘undermine Trump’