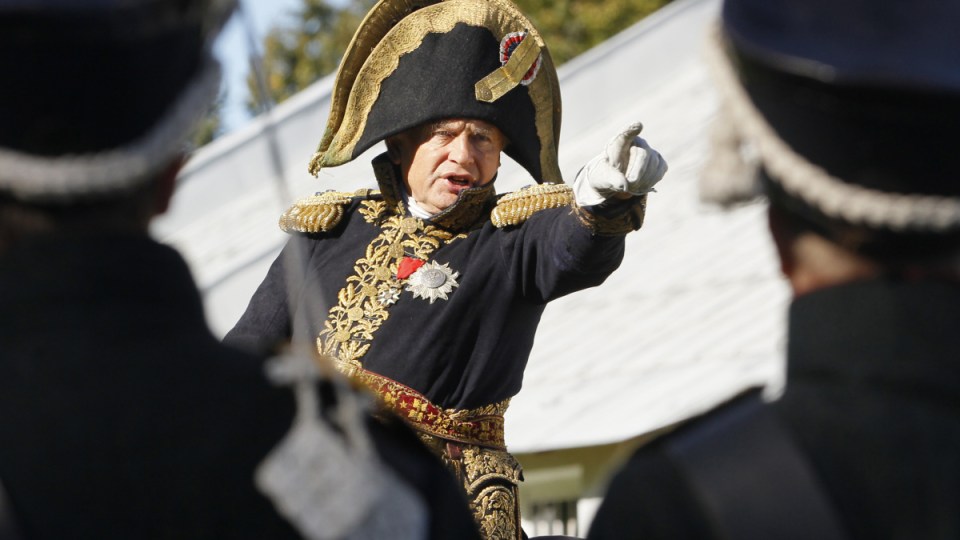 A decorated celebrity academic has been pulled from a frigid Russian river with a backpack containing severed arms in a gruesome and bizarre murder case.

Oleg Sokolov, 63, a renowned expert on Napoleon, is being questioned after the dismembered body of his lover, an ex-student, was later found in his St Petersburg apartment nearby.

Media outlets report the history professor has confessed to the killing of Anastasia Yeshchenko, 24, whom he reportedly shot in a fit of rage on Thursday (local time), hiding her body behind a closed door while he entertained guests.

He later sawed off her arms and legs, while drinking, and had intended to dispose of the parts in the Moika River before publicly taking his life in dramatic fashion in front of tourists at St Petersburg’s Peter and Paul Fortress while dressed as Napoleon.

Instead the drunk St Petersburg University academic was fished from the river, which is apparently shallow enough to stand in, after a passing taxi driver called police.

Lawyer Alexander Pochuyev said Sokolov, an expert in French revolutionary military history, had signed a statement of guilt and was co-operating with police, according to reports.

He was hospitalised with hypothermia on Saturday but taken to a police station for questioning on Sunday.

Sokolov had been bestowed France’s highest honour, the Legion of Honour, for his studies and popularisation of French history and its  army.

He had written several books on Napoleon, including co-authoring works with the victim, and acted as a historical consultant on several films.

The couple’s passion for French history was such that they were known to dress in period costume, with Sokolov donning a glittering French army general uniform of gold braid and sash and Ms Yeshchenko wearing lady gloves.

The murderer, Oleg Sokolov, planned to commit suicide, while dressed as Napoleon, in Peter & Paul Fortress (in front of tourists), but didn't follow through. The victim was 24-year-old Anastasia Yeshchenko, who was living with the 63-year-old professor. https://t.co/dDqbhfVCPQ pic.twitter.com/vtBopi2R13

The case has made headlines across Russia and around the world but there are conflicting reports as to whether the controversial professor has confessed.

The BBC quotes lawyer Alexander Pochuyev saying “he has admitted his guilt,” and regretted what he had done.

However CNN reports that stories about a confession are inaccurate, citing the St Petersburg branch of the Investigative Committee.

Police are reportedly also investigating reports he was violent towards former students.

Sokolov was a member of France’s Institute of Social Science, Economics and Politics (Issep), which has since stripped him of his position on its scientific committee.

“We learn with horror… the atrocious crime of which Oleg Sokolov is guilty,” it said in a statement reported by BBC.

“We could never imagine that he could commit such an odious act.”

Napoleon professor pulled from river with severed arms in backpack