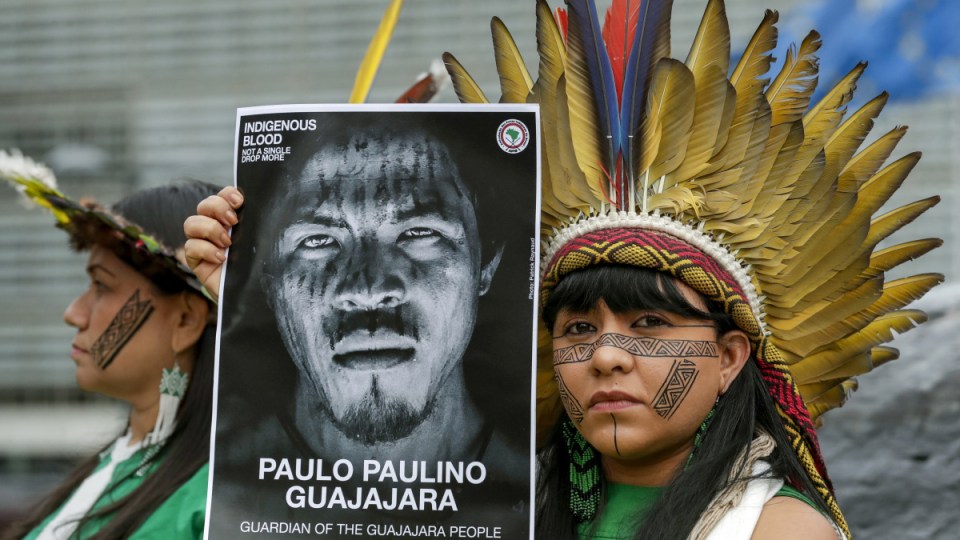 For a person living in extreme poverty, the wood from a single tree in the Amazon rainforest may be equal to one or two year’s salary.

Those desperate for money are going so far as to murder the indigenous people trying to protect the dying forest from deforestation.

Sadly, this is not unusual and is actually happening around the world.

As natural resources become scarcer, the violence between indigenous tribes and illegal loggers is only going to increase, warns Dr James Watson, a professor of Conservation Science at the University of Queensland.

“Unfortunately, it’s the state of the world,” he said.

“It’s not just forestry, it’s mining. You can see that everywhere where you got valuable minerals, you see massive degradation of the environment and also conflict.”

Earlier this week, reports emerged that 26-year-old Indigenous leader Paulo Paulino Guajajara was searching for water when he was allegedly ambushed by five armed loggers and shot dead in the Amazon rainforest in Maranhão, a state northeast of Brazil, according to local authorities.

Mr Guajajara was a member of “Guardians of the Forest”, a group of 120 Guajajara indigenous people who serve to protect Amazon’s Arariboia reserve from illegal logging.

A second person who was with Mr Guajajara suffered a gunshot wound to his back but managed to escape.

Often, those doing the killings are actually being funded and coerced by much more powerful people, Dr Watson said.

What’s even more worrying is that “there’s been no control of that kind of level of corruption throughout the world”, he said.

“Hence you get these local skirmishes and people dying as a consequence.”

The “saddest thing” is that solutions to prevent this kind of violence have already been established, yet very few countries and corporations have implemented them, Dr Watson said.

Just read the Sustainable Development Goals that the United Nations has set up and hundreds of countries have signed onto. Or take a look at its Conventions on Biological Diversity and Climate Change.

Australia is not immune to environmental conflict but very rarely does it result in any deaths.

The tension between loggers and forest protectors in Australia is real and well-documented but for decades the country has had national environmental laws preventing such tension from spiraling out of control.

The lack of law enforcement in other countries is a serious problem and just another reason why land defenders are being murdered.

“I know many, many examples of this type of behaviour in Cambodia – a country which experiences a lot of deaths of ranges and the like trying to protect native forests,” Dr Watson said.

Loggers have harmed, kidnapped and killed people because of the high value of some species of timber, Dr Watson said.

“Rosewood is a really good example. One tree is worth thousands and thousands of dollars.”

Loggers aren’t the only ones at fault

In July, the Amazon lost a record-breaking 1,345 square kilometers of rainforest – that’s equivalent to the loss of three football fields’ worth of trees per minute.

Illegal loggers aren’t the only ones to blame for the increase in forest clearance which runs the risk of transforming large areas of rainforest into a savannah.

Naturally occurring fires tend to break out in the Amazon during the dry season between July and October.

But the majority of blazes this year appeared to have been deliberately started by farmers wanting to clear the land for crop-growing and grazing.

By September, the Amazon had suffered more than 93,000 fires – a more than 60 per cent increase from the same period last year.

The world’s largest rainforest, the Amazon is vital in storing carbon dioxide and slowing down global warning.

But President Jair Bolsonaro’s policies have consistently been at the forefront of condemnation, with environmentalists accusing his administration of giving the green light to illegal logging.