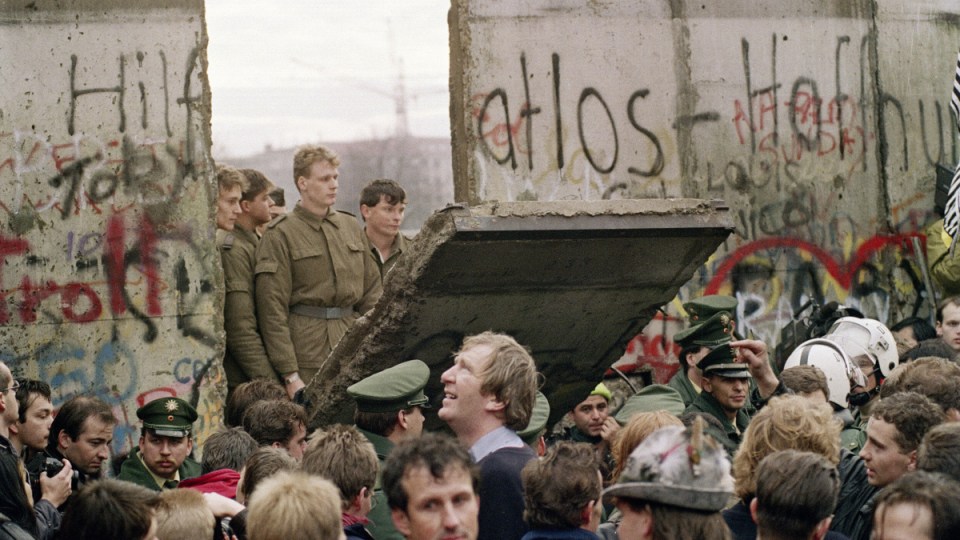 West Berliners crowd in front of the Berlin Wall as they watch East German border guards demolishing a section of the wall. Photo: Getty

When Werner Krätschell, an East German pastor and dissident, heard that the Berlin Wall was open, he did not quite believe it. But he grabbed his daughter and her friend and drove to the nearest checkpoint to see for himself.

As their yellow Wartburg advanced unimpeded into what had always been an off-limits security zone, Mr Krätschell rolled down the window and asked a border guard: “Am I dreaming or is this reality?”

“You are dreaming,” the guard replied.

It had long been a dream for East Berliners like Mr Krätschell to see this towering symbol of unfreedom running like a scar of cement and barbed wire through the heart of their home city ripped open.

And when it finally became reality, when the Cold War’s most notorious armed border opened overnight, and was torn apart in the days that followed, it was not in the end the result of some carefully crafted geopolitical grand bargain.

It was, at the most basic level at least, the wondrous result of human error, spontaneity and individual courage.

“It was not predestined,” said Anne Applebaum, the historian and columnist. “It was not a triumph of good over evil. It was basically incompetence – and chance.”

In the early evening of that fateful November day, a news conference took a historic turn.

Against the backdrop of mass protests and a wave of eastern German refugees that had already fled the country via Hungary and what was then Czechoslovakia, Günter Schabowski, leader of the East Berlin Communist Party, convened journalists to announce a series of reforms to ease travel restrictions.

When asked when the new rules would take effect, Mr Schabowski paused and studied the notes before him with a furrowed brow. Then he stumbled through a partially intelligible answer, declaring, “It takes effect, as far as I know … it is now … immediately.”

It was a mistake. The Politburo had planned nothing of the sort. The idea had been to appease the growing resistance movement with minor adjustments to visa rules – but also to retain the power to deny travel.

But many took Mr Schabowski by his word.

After West Germany’s main evening news, popular with East Germans who had long stopped trusting their own state-controlled media, effectively declared the wall open, crowds started heading for checkpoints at the Berlin Wall, demanding to cross.

At one of those checkpoints, a Stasi officer who had always been loyal to the regime was working the night shift. His name was Lieutenant Colonel Harald Jäger. And his order was to turn people away.

As the crowd grew, the colonel repeatedly called his superiors with updates. But no new orders were forthcoming. At some point he listened in to a call with the ministry, where he overheard one senior official questioning his judgment.

“Someone in the ministry asked whether Comrade Jäger was in a position to assess the situation properly or whether he was acting out of fear,” Mr Jäger recalled years later in an interview with Der Spiegel.

“If you don’t believe me, then just listen!” he shouted down the line, then took the receiver and held it out the window.

Shortly after, Mr Jäger defied his superiors and opened the crossing, starting a domino effect that eventually hit all checkpoints in Berlin. By midnight, triumphant easterners had climbed on top of the wall in the heart of the city.

Not a single shot was fired. And no Soviet tanks appeared.

That, said Axel Klausmeier, director of the Berlin Wall Foundation, was perhaps the greatest miracle of that night. “It was a peaceful revolution, the first of its kind,” he said. “They were prepared for everything, except candles and prayers.”

Through its history more than 140 people had died at the Berlin Wall, the vast majority of them trying to escape.

There was Ida Siekmann, 58, who became the first victim on August 22, 1961, just nine days after the wall was finished. She died jumping from her third-floor window after the front of her house on Bernauer Strasse had become became part of the border, the front door filled in with bricks.

Peter Fechter, 18, became the most famous victim a year later. Shot several times in the back as he scaled the wall, he fell back onto the eastern side where he lay for over an hour, shouting for help and bleeding to death, as eastern guards looked on and western cameras whirled.

The youngest victim was 15-month-old Holger H, who suffocated when his mother tried to quiet him while the truck his family was hiding in was being searched on January 22, 1971. The parents made it across before realizing that their baby was dead.

Well into 1989, it was nearly impossible to escape East Germany: The last killing at the wall took place in February that year; the last shooting, a close miss, in April.

The Soviets had squashed an East German uprising in June 1953 and suppressed similar rebellions in Hungary in 1956 and Prague in 1968.

In June 1989, just five months before the Berlin Wall fell, the Communist Party of China committed a massacre against democracy protesters in Tiananmen Square.

“They had been shooting people for 40 years,” said Ms Applebaum, the historian. “No one knew what they would do in 1989.”

But 1989 proved different. In the end, what gave people courage to resist were a series of shocks that had already shaken Soviet Communism to the core.

And perhaps most important, Ms Applebaum said, belief in the system had long evaporated.

“The ideology had collapsed, and people just didn’t believe in it anymore,” she said.

The fall of the Berlin Wall became the end of history and liberalism the unchallenged model of modernity. Now illiberalism, Chinese-style, is challenging the West.

Complacency is dangerous, said Ms Applebaum: “That is one lesson: Societies that don’t reform, die.”