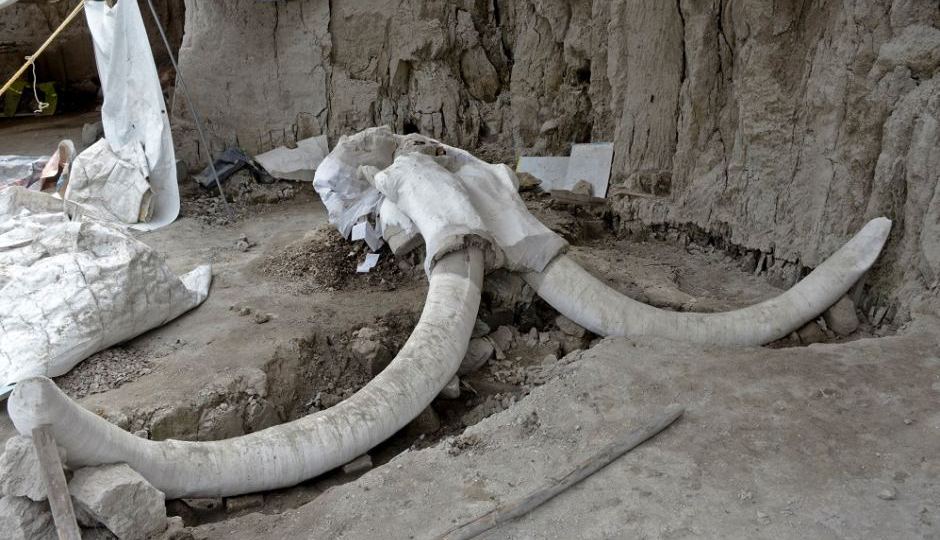 Mexico's National Institute of Anthropology and History said hunters may have chased the mammoths into the traps. Photo: HO/INAH/AFP

The skeletons of 14 woolly mammoths have been discovered inside two man-made pits excavated some 15,000 years ago by prehistoric humans.

The site of a planned landfill in Tultepec, just north of Mexico City, was being dug up by archaeologists when the two ancient trenches were unearthed.

A trove of more than 800 bones from the 14 extinct giants was found, with one of the skulls containing marks of a spear wound on the front.

Each pit was approximately 1.7 metres deep and 25 metres in diameter with walls at almost 90-degree angles.

They’re believed to be the first-ever discovery of so-called mammoth traps set by humans to capture and butcher massive prey.

Luis Córdova Barradas, the leader of the five-person excavation team, said the discovery helps further much-needed research into the relationship between prehistoric hunting and gathering communities and the huge herbivores.

“There was little evidence before that hunters attacked mammoths. It was thought they frightened them into getting stuck in swamps and then waited for them to die,” he told reporters.

“This is evidence of direct attacks on mammoths. In Tultepec we can see there was the intention to hunt and make use of the mammoths.”

The find suggests that hunters may have used torches to chase the mammoths into the traps.

The discovery by researchers from Mexico’s National Institute of Anthropology and History has also revealed the highly organised nature of hunters from the late Pleistocene period.

Researchers further identified traces of the first humans who settled in the area which surrounds today’s Mexico City.

It was previously thought that the extinct species were only attacked when they were an easy target, for example when they became stuck in a bog or swamp.

The discovery of this mammoth-hunting method in the area represents a change in thinking about the interaction between humans and the species, INAH archaeology coordinator Pedro Sanchez Nava said.

Archaeologists believe more hunting pits are likely to be found.