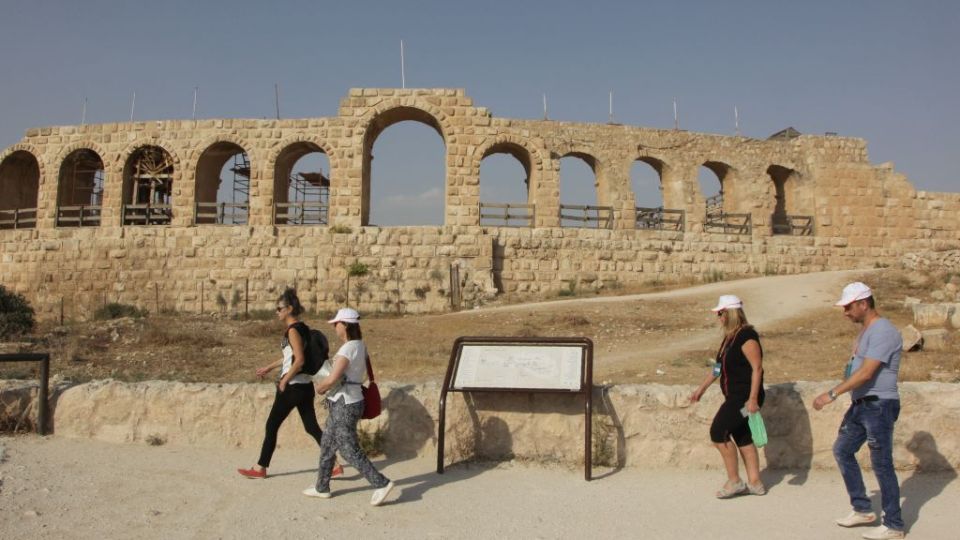 Tourists have been stabbed at the ancient Roman city of Jerash, a popular attraction 50 kms north of Jordan's capital Amman. Photo: Getty

A man from a Palestinian refugee camp has stabbed eight people, including four foreign tourists and their tour guide, at a popular archaeological site in northern Jordan.

The suspect’s family identified him as Mustafa Abu Tuameh. They said the 22-year-old was not a member of an organised militant group and believed he had acted alone.

But they said he had recently become very religious, was very poor and apparently planned to die during his attack.

The incident in Jerash, one of the country’s most visited destinations, threatened to cast a shadow over the vital tourism industry.

The wounded included three Mexican tourists and a Swiss woman, according to Jordan’s Public Security office.

Along with the tour guide, three other Jordanians, including two security officers and a bus driver, were also hurt before the attacker was subdued and arrested.

The office said two people, a Mexican woman and a Jordanian security officer, were in a serious condition and airlifted to a hospital in the capital, Amman, by helicopter.

Three Mexican tourists and one Swiss were wounded along with four locals in Jordan when a man went on a stabbing rampage in Jersah city, a major tourist destination. Police said a man was arrested over the attack https://t.co/1gTaDYd5Hw pic.twitter.com/p5zrkcHaaJ

Jerash is roughly 40 miles north of the capital.

Jordan’s foreign minister Ayman Safadi said he called his Swiss counterpart and Mexico’s deputy foreign minister to tell them the kingdom was providing medical treatment to those “injured in the horrible stabbing crime”.

He said he assured them that the investigation was under way.

Later on Wednesday, Jordan’s health minister said all of the wounded were in a stable condition, and none had life-threatening injuries.

Amateur video showed a bloody scene next to the Jerash archaeological site, an ancient city whose ruins include a Roman amphitheatre and a columned road.

In one video, a woman can be heard screaming in Spanish. “It’s a dagger, it’s a dagger, there is a knife. Please, help him now!”

The Jordanian army’s website Hala Akhbar identified the attacker as a resident of the nearby Jerash refugee camp who is in his early 20s.

The camp, inhabited by Palestinians whose families left the Gaza Strip during the 1967 Middle East war, is one of the poorest areas of Jordan.

There were no immediate details on the man’s motives but residents of the camp denounced the attack.

“We condemn the terrorist attack that was carried out by a coward in Jerash,” they said in a signed letter quoted on a government newspaper’s website.

Jordan’s economy relies heavily on tourism, and Islamic militant groups and other attackers have in the past targeted tourist sites to embarrass the government or harm the valuable industry.