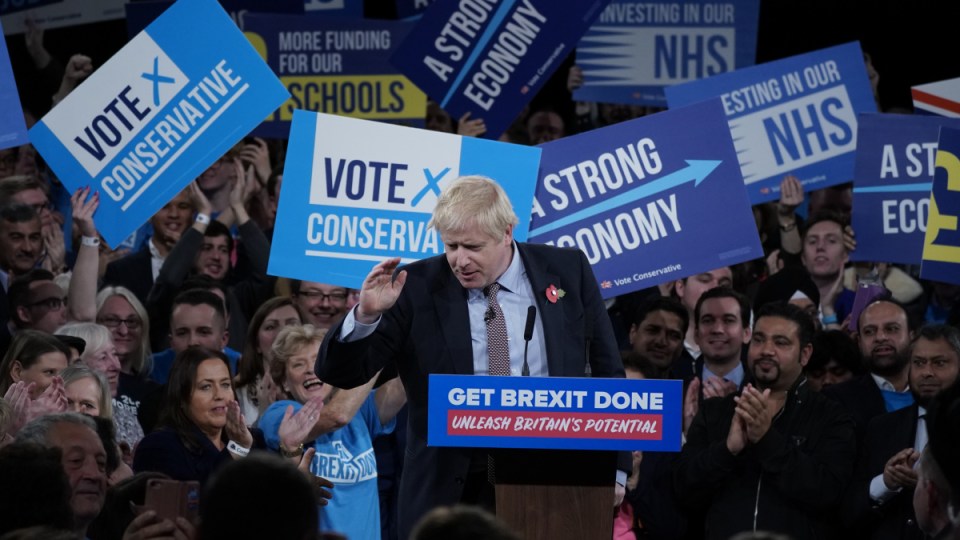 With just a week until Britons vote, a poll has Boris Johnson's Conservatives 10 points ahead of the Labour Party. Photo: Getty

The UK Parliament has been dissolved ahead of next month’s general election after Prime Minister Boris Johnson met with the Queen.

But a string of gaffes and a resignation threatened to overshadow the first day of the Conservative Party’s election campaign.

Mr Johnson kicked off the campaign with a speech outside 10 Downing Street promising a resolution to the Brexit crisis and taking aim at Opposition Leader Jeremy Corbyn.

“Come with us, get Brexit done, and take this country forward,” Mr Johnson said.

“Or, and this is the alternative next year, spend the whole of 2020 in a horror show of yet more dither and delay.

“Imagine waking up on Friday December 13 and finding Corbyn at the head of his technicolour yawn of a coalition.”

Mr Johnson pledged that if elected, he would begin to push his Brexit deal through Parliament to get it “done by the end of January”.

“Let’s get Brexit done and unleash the potential of the whole United Kingdom,” he said.

Just before Mr Johnson’s speech, Cabinet minister Alun Cairns quit his role as Welsh Secretary amid claims he lied about his knowledge of a former aide allegedly sabotaging a rape trial in April 2018.

Mr Cairns had denied knowing Ross England, a Conservative candidate for the Welsh Assembly, had fabricated claims about the victim’s sexual history during the trial and only learned of it when the story broke last week.

But BBC Wales uncovered an email sent to Mr Cairns in August 2018 that mentioned the matter, four months before Mr England then went on to be selected as a candidate.

“This is a very sensitive matter, and in the light of continued speculation, I write to tender my resignation as Secretary of State,” Mr Cairns said in a letter to Mr Johnson.

“I will co-operate in full with the investigation under the ministerial code which will now take place and I am confident I will be cleared of any breach or wrongdoing.”

Despite resigning from his Cabinet position, it is understood Mr Cairns will still contest his seat of the Vale of Glamorgan in the election.

On Tuesday, the Conservatives went into damage control after Leader of the House Jacob Rees-Mogg suggested the victims of the Grenfell Tower fire should have ignored firefighters’ directions and used “common sense” to flee the blaze, which killed 71 people.

“If you just ignore what you’re told and leave you are so much safer,” Mr Rees-Mogg told LBC radio in an interview.

“And I think if either of us were in a fire, whatever the fire brigade said, we would leave the burning building. It just seems the common sense thing to do.”

Mr Rees-Mogg was later forced to apologise for the comments after families of the victims, Opposition MPs and even UK grime musician Stormzy criticised the remarks.

The Conservatives also came under fire for posting on social media a doctored video of Labour’s Sir Keir Starmer, which was edited to make it appear that the shadow Brexit secretary was unable to answer a question about his party’s Brexit strategy.

“You doctored the end of the clip you originally put out to make it look like Keir Starmer had no answer to my question. In fact he answered immediately. You could have had plenty of fun with that interview anyway — why fake it,” Morgan tweeted.

Labour can’t even explain their own Brexit plan to the country. Why should anyone vote for them? pic.twitter.com/EoOqd5BvoB

Even some Conservative MPs who had shared the video derided it after realising it had been edited.

“It would appear this has inexplicably been doctored at the end,” MP Johnny Mercer said.

“I apologise and will remove it.

“The original interview was bad enough — I have no idea why this needed altering.”

I’d be a different kind of PM: Corbyn

Mr Corbyn, whose Labour Party gained 30 seats in the 2017 snap election, said his party would deliver real change and “transform” the country.

“Not the kind who thinks politics is a game.”

He also hit out at the “shameful” remarks from Mr Rees-Mogg over the Grenfell tragedy.

“They (the Conservatives) quite shamefully think the victims of Grenfell fire died because they didn’t have the common sense to save themselves,” Mr Corbyn said.