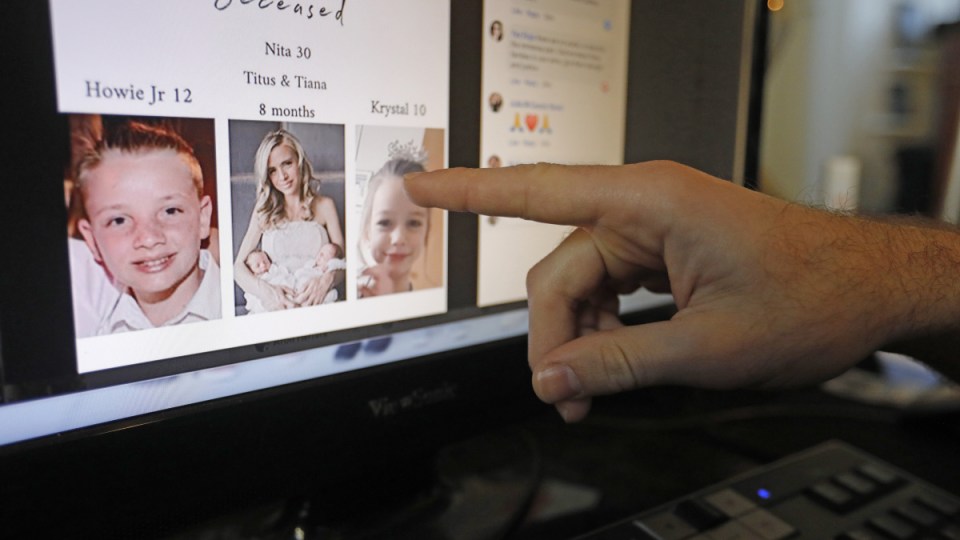 Austin Cloes points to a photo of relatives Rhonita Miller and her family. Photo: AAP

The Mexican-based US family of the victim’s of a suspected drug-gang shooting had suffered from previous run-ins with cartel members.

A group of at three mothers and six children and infants were burned alive and shot to death on Tuesday night (Australian time) in a horrific massacre authorities said could be a possible case of ‘mistaken identity’.

A convoy of three vehicles carrying US citizens was travelling through a northern Mexican state when the group was ambushed by gunmen.

Phoenix-based Aaron Staddon, who married into the extended family, told the New York Times the Americans got along well with their Mexican neighbours, but added that their location in the path of Mexico’s gun violence has cost them dearly in the past.

More recently, Mr Staddon said some family members were returning to the US, wary of the violence that was once again on the rise.

Kenny LeBaron, whose cousins were among those killed in the attack, described the actions of the gunmen as “evil”.

“When you know there are babies tied in a car seat that are burning because of some twisted evil that’s in this world, it’s just hard to cope with that,” he told the Times on Wednesday.

Austin Cloes, a Utah relative of the victims, said during an interview at his home in a Salt Lake City suburb that he saw all the victims at a family reunion in Mexico last summer, where they played basketball and spent time together.

“These sorts of people shouldn’t just be buried without their names being put out there,” Mr Cloes said. “These are great people. These are US citizens.”

Mr Cloes knew Dawna Langford, 43, the best and called her a loving and caring woman who was proud of her children. He choked up talking about hearing reports that another victim, Christina Langford, might have saved her baby Faith’s life by placing her on the car floor.

Mr Cloes said the members of his extended family did not follow the doctrine of the mainstream Church of Jesus Christ of Latter-day Saints he follows, but they were religious and believed in Jesus Christ.

Mr Cloes said none of the family members he knows practice polygamy, even though the tiny community in La Mora in Sonora, about 110 kilometres south of Douglas, Arizona, was founded long ago by people who left the mainstream church in the US to escape its 19th century ban on the practice.

A number of similar American farming communities are clustered around the Chihuahua-Sonora state border with many members born in Mexico, giving them dual citizenship with the United States.

Taylor Langford, who splits his time between the Mexican community and his home in the Salt Lake City suburb of Herriman, Utah, said the three women killed were his aunt and two cousins.

His father and uncle, who were both in Mexico when the attack took place, told him each woman was driving a separate car when they were ambushed on a quiet dirt road they often travelled without problems.

He said Rhonita Miller, and her four children, including 8-month-old twins, were traveling about six kilometres behind the other vehicles when their car was struck by gunfire and engulfed in flames.

Ms Miller’s father, Adrian LeBaron, said in a brief telephone conversation from Sonora state that the family had requested help from the Mexican government but had not yet heard back.

“She was fired at, all shot up, burned,” he said of his daughter.

Ms Miller and her children were remembered fondly Tuesday in North Dakota, where they had previously lived.

State Senator Jordan Kannianen said Ms Miller had attended the Sunday school class he taught in Stanley. He said she was kind and “very earnest about her faith”.

The Miller and Kannianen children had also attended Sunday school together, the senator said.

He said Ms Miller, her husband and their two older children left North Dakota before the twins were born earlier this year.

Mr Kannianen’s wife, Elizabeth, said she cannot bring herself to tell her own children about what happened.

‘I am not afraid’: The modern unknown soldier risks it all in Ukraine
Energy market reform will be a big boost for emissions reductions: Chris Bowen
Greens sign up for Labor’s looming jobs-and-skills summit as Liberals stick with boycott
Joe Biden’s $430b green victory for the environment
China cementing its Thailand ties with joint military exercises
NRL: Titans frantic to end 10-game losing streak as Manly showdown looms
Tourist adrift in Aegean Sea for two days
Today's Stories