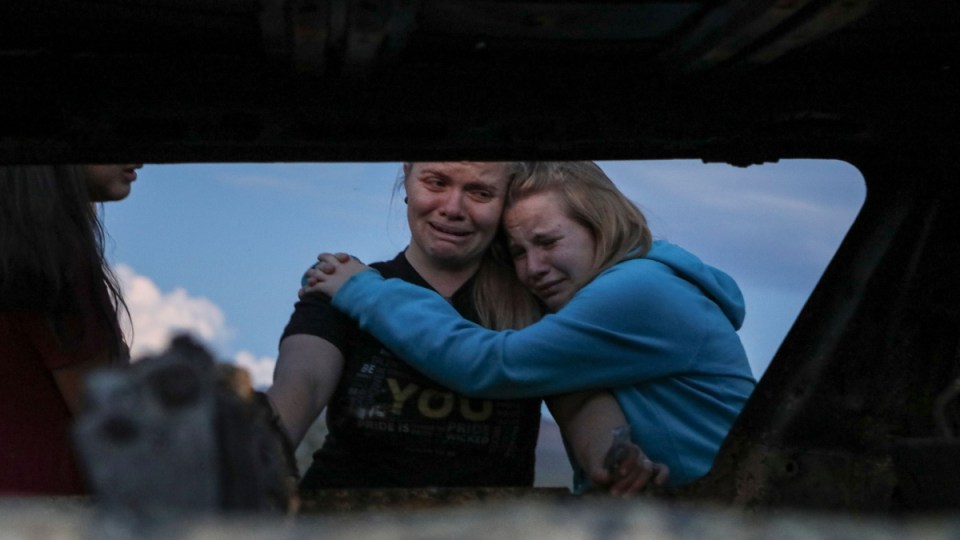 Grieving family members bathe one of the burned-out vehicles with their tears as they mourn the nine blameless lives snuffed out by Mexican narcos. Photo: Getty

Nearly 100 people are being murdered every day in Mexico, many at the hands of vicious drug cartels.

The country’s murder rate this year is expected to rise beyond 2018’s record high of almost 36,000 deaths.

More than a decade since Mexico declared a war on drugs, cartel kingpins are running rampant.

But while authorities claim they are trying to crackdown on the drug trade, it’s become clear that poor communities are actually reliant on the riches of the cartels.

And community members “are not going to give up the income that they receive from the drug cartels” because they have “more to lose” by sticking with their government, said Vince Hurley, Macquarie University criminologist and former drug detective.

“Politicians will come and go but the drug industry is there to remain,” he said.

US President Donald Trump seems to see the vexed issue as much more black and white. Pledging to “wipe them off the face of the earth”, Mr Trump said in a tweet on Wednesday morning (Australian time) that it was time the US worked with Mexico to “wage war on the drug cartels”.

It came after reports emerged of a Mormon family of nine being burned alive and shot to death by suspected drug cartel gunmen in Sonora, which is by the US-Mexico border and home to rival cartels – La Linea and Los Chapos.

Mr Hurley said Mr Trump was living in “pixie land” if he truly thought the US could help Mexico win its war on drug cartels, as it would suck up a lot of military resources and cost the US economy a “phenomenal” amount of money.

“He (Mr Trump) can’t even prevent illegal migration with a wall so how is he going to police an entire country using military which would have to stay there indefinitely to police the drug industry,” Mr Hurley said.

This is the time for Mexico, with the help of the United States, to wage WAR on the drug cartels and wipe them off the face of the earth. We merely await a call from your great new president!

The US provided $3 billion (AUD$4.35 billion) in aid to Mexico through the so-called Mérida Initiative, a security partnership created by the bordering countries in 2007.

But since Mr Trump entered office, the US has dropped the amount of money it contributes to the efforts.

There have been more than 250,000 murders since Mexico’s army was deployed in December 2006 to crackdown on notorious drug kingpins.

By the end of September, the number of people killed in 2019 reached 25,890, with Mexico recording 35,964 murders in 2018, according to Mexico’s National Statistics Institute.

That’s works out to about 98 deaths every day.

While most of those targeted by violent gangs have been locals, attacks on travellers are also a real threat. Among the tourist murders connected to drug gangs were those of West Australian friends Dean Lucas and Adam Coleman who were killed on a road nicknamed the “Highway of Death” during a surf trip in 2015.

Smart Traveller – a website run by the Department of Foreign Affairs and Trade – advises Australians to exercise a high degree of caution when travelling to Mexico due to the “high levels of violent crime and drug-related violence”.

Updated on October 29, the site says people should reconsider their need to travel to the Mexican state of Tamaulipas and most of Michoacán, Guerrero and the Sierra Madre Occidental Mountains.

It warns that “travellers can become victims of violence directed against others”.

Why cartels have grown

Cartels have flourished because they use their massive drug profits, which the US government estimates to be worth tens of billions of dollars per year, to bribe people in power, including judges, police and politicians.

That’s according to a recent report by the Council on Foreign Relations which says most drug trafficking organisations have been able to smuggle illicit drugs from Mexico into the US using more than three hundred ports of entry controlled by Customs and Border Protection.

From education to infrastructure spending, to social service, and who gets into positions of power, cartels “control or operate everything” in some Mexican regions, Mr Hurley said.

He said gangs fill a “vacuum that the government can’t fill economically” because state governments often don’t have the money to provide the services citizens need.

Essentially, the “community are wedded to them”, Mr Hurley said.

“They’ll have people in the community or the government that serve their purpose because the drug industry or the cartels are so strong and have been for centuries.

“Politicians in some geographic areas are only allowed to exist because of the drug cartels.”