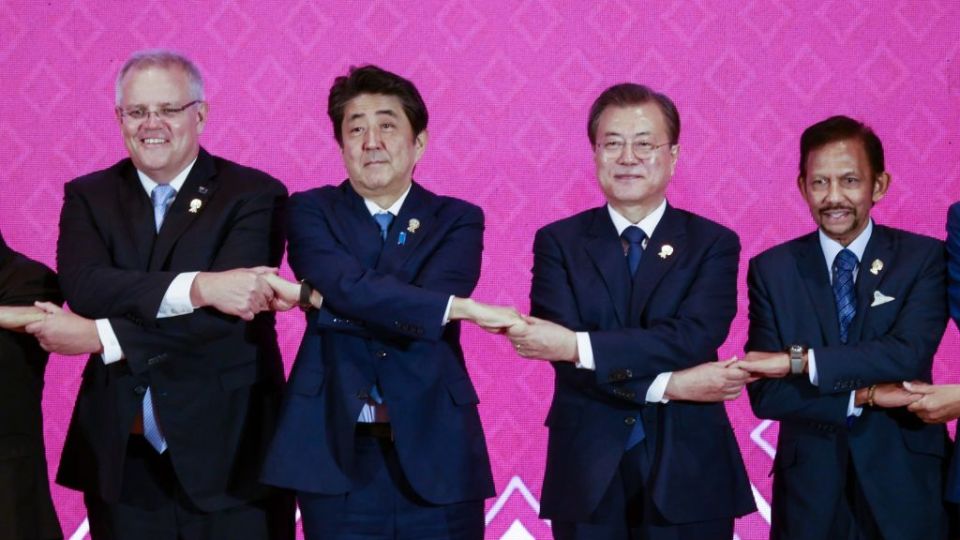 Australia will be part of the world’s largest trade deal after 15 Asia-Pacific nations agreed to an historic pact covering almost one-third of global economic production.

Fifteen countries have agreed to the terms of the Regional Comprehensive Economic Partnership (RCEP), pushing ahead despite a key nation – India – waivering and holding off until next year.

The history-making deal at the East Asia Summit in Bangkok covers about 29 per cent of global economic production – even without India – and almost half the world’s population and has been seven years in the making.

The door has been left open for India, which balked because of domestic concerns relating to a faltering economy and fears about opening its market to China.

Mr Morrison said the agreement would give greater international access to Australian service industries such as education, health, communications and transport and allow them to invest in some countries for the first time, such as China.

He proclaimed the deal would ensure the future of Australian jobs and also help stabilise tensions in the region, particularly as China has been pursuing territorial claims in the South China Sea.

“This arrangement is twice as big as the Trans-Pacific Partnership. That is how big it is,” Mr Morrison said.

“The door will always be open to India. And it has always been our view and many that sit around the table that this is a bigger and better deal with India in it.

“Patience is the virtue in this and continuing to enable that to be achieved and there has been enormous progress made. This would be one for the first time that will bring together India and China into that arrangement.

“We are not going to displace the entire globe or indeed India’s agricultural sector,” Ms Ardern said.

“We cannot physically feed the world and we don’t seek to.

RCEP negotiators will continue to work on luring India into the deal next year.

“India has significant outstanding issues, which remain unresolved,” the nations involved said in a statement.

“All RCEP participating countries will work together to resolve these outstanding issues in a mutually satisfactory way. India’s final decision will depend on satisfactory resolution of these issues.”

The remaining 15 countries want the deal finalised by November next year, allowing time for “legal scrubbing” to take place.

Mr Morrison ducked questions about the US president’s absence at Asia’s premier annual summit on security and trade.

Australia has consistently called on the United States to ramp up its presence in the Indo-Pacific to guard against China’s rise.

“It is not about how it sits with me. This job isn’t about how I feel,” he told reporters.

“I am not here to run a commentary on people in other places. I am here to pursue the interests of Australians and their jobs.”

How Australia will benefit from the world’s largest trade deal