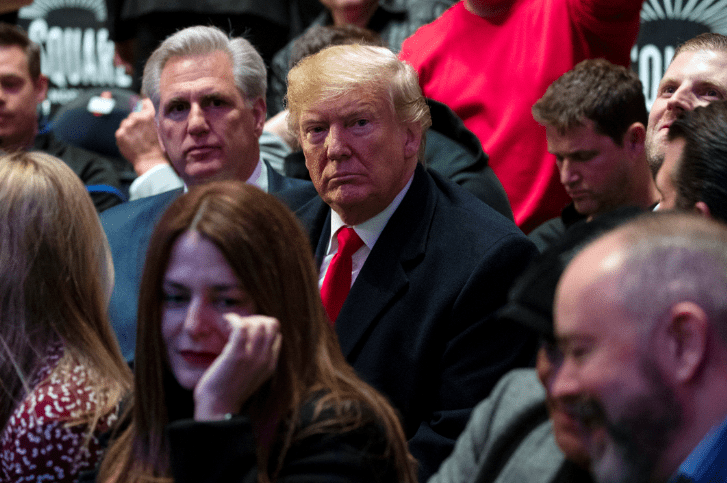 Baseball fans booed him and Mexican border-crossers laugh at his infamous wall – but President Donald Trump now knows where to go when his ego needs stroking: any Ultimate Fighting Championship tournament.

Mr Trump left Washington for New York intent on being the star attraction at the Madison Square Garden biff-a-thon, pausing only long enough on the White House lawn only long enough to lecture reporters waiting by his helicopter

And he wasn’t disappointed as the packed auditorium erupted in cheers, the few boos drowned out by the pumped-up crowd’s adoring acclaim.

Flanked by key Republican lawmakers and sons Eric and Don Jr, Mr Trump stood and waved from his seat, just feet from the octagon, drawing cheers from the 20,000-strong crowd.

For Trump, the visit was a welcome break from a week of bad news.

Back in Washington, the House of Representatives impeachment probe of allegations he withheld aid from Ukraine to pressure authorities there to investigate political rival Joe Biden appears certain to lead to impeachment.

And down on the border with Mexico, migrants and their “coyote” smugglers have succeeded in cutting through sections of the wall Mr Trump promised voters in 2016 would be  “virtually inpenetrable” border.

And all it takes is a cheap saw available for around $US100 ($A145) apiece at hardware stores, border agents and officials told The Washington Post, which reported Trump administration officials admitting being aware of “a few instances” of the $US10-billion wall being breached.

At a rally on Friday in Mississippi, Trump predicted an “angry majority” of voters would support him against impeachment – a boast that came just a day after the Democratic-controlled House voted formally to lay out the rules of the inquiry.

Trump’s visit was his first to New York since announcing he was moving his permanent residence from Trump Tower on Fifth Avenue to his Mar-a-Lago estate in Palm Beach, Florida.

New York Governor Andrew Cuomo tweeted “good riddance” after Trump slammed local officials for treating him badly despite paying what he said were “millions” in taxes there.

Several dozen demonstrators, including members of local anti-fascist groups, gathered outside the venue in Midtown Manhattan to protest Trump’s visit, some holding placards that read “Impeach Trump” and chanting “Out now!”

His warm reception from the ultimate fighting fans was in stark contrast to his appearance at Game 5 of the Major League Baseball World Series between the Washington Nationals and Houston Astros last Sunday.

As arena resounded to the sound of booing and catcalls some attendees chanted “Lock him up!” when Trump was shown on screen at the Washington Nationals Park stadium.