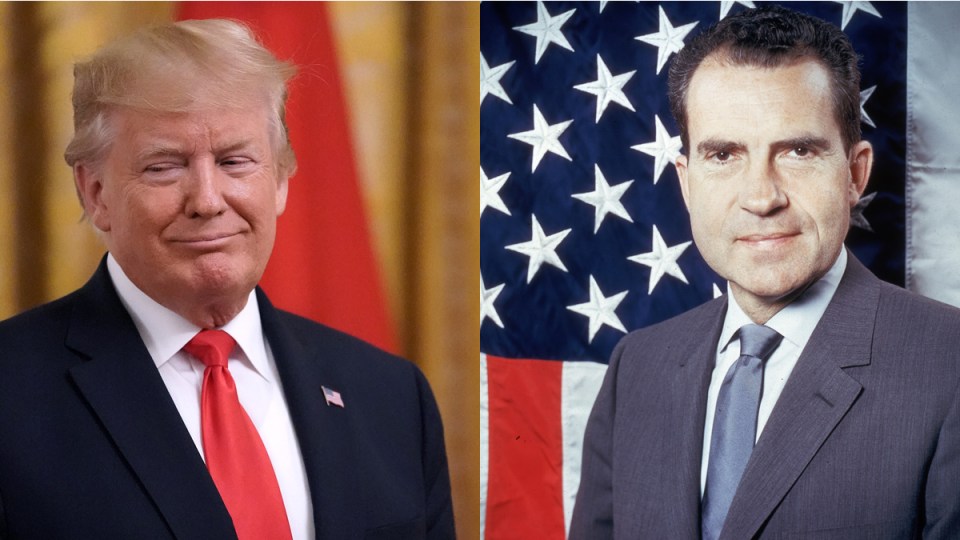 Nixon lived through it, and Trump is facing it. Welcome to impeachment. Photos: Getty
analysis

For those of you still trying to figure out why Brexit is so darned complicated, here’s a new international political problem to add to your civics homework: impeachment.

This week, the US House of Representatives voted to formally begin an impeachment inquiry into President Donald Trump for his alleged strong-arming of Ukraine to investigate his Democratic rival Joe Biden. The procedural vote was carried live on radio and television, reflecting a moment of high national drama.

"I don't know why the Republicans are afraid of the truth."

House Speaker Nancy Pelosi spoke on the House floor before the House vote on a resolution to formalize the impeachment inquiry into President Trump. https://t.co/NM4BGfE2bM pic.twitter.com/Lh0jZNN7vs

And while the vote, and its partisan outcome, wasn’t a surprise, it was a milestone: for only the fourth time in the 243-year history of the republic, Congress’ lower house had decided to initiate proceedings that could remove a sitting president from office.

The reality is more complicated.

Much of the confusion around impeachment lies in the word itself. Most Americans believe that to “impeach” a president means his automatic removal.

This confusion was first sown in the 1970s, when the House of Representatives – for the first time in more than 100 years – began an impeachment investigation of President Richard Nixon over his involvement in and coverup of a burglary at Democratic National Headquarters, a mess commonly referred to as Watergate.

After a committee vote to advance impeachment to another stage in the House, Nixon chose to resign. In doing so, the public conflated the house vote with Nixon’s resignation, and that confusion remains today. 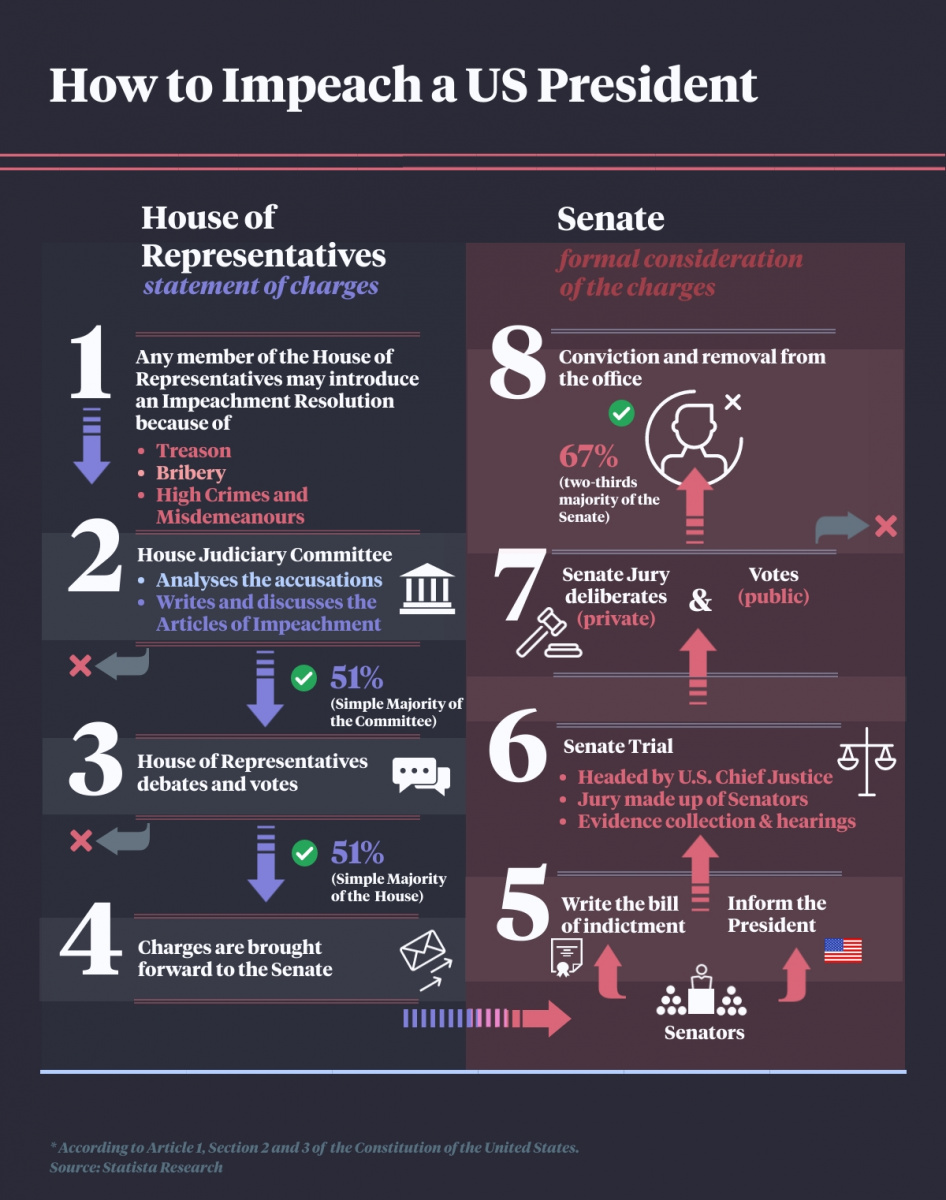 Impeachment, as spelled out in the US Constitution, can be brought against a president for “bribery, treason, or other high crimes and misdemeanours,” a purposely vague phrase covering all manner of civic sins. It does not trigger automatic removal. Instead, it is more like an indictment, or a formal levelling of charges.

Before those charges are formally made, the House of Representatives acts as a sort of prosecutor, investigating the claims against the president. If they find enough evidence of wrongdoing, the president is “impeached”.

It is then up to Congress’s upper body, the US Senate – 100 members, two from each state – to hold a trial and decide whether the president is guilty. It’s important to note that the Senate has NEVER made the grave choice to remove a president: Nixon quit, and both president Andrew Johnson in the 1860s and Bill Clinton in the 1990s were allowed to stay in office.

Needless to say, impeachment is a very big deal – a convulsive, divisive process that pits two co-equal branches of government against one another. Unlike a vote of confidence in a parliamentary system, it is not routinely used. It’s a break-glass-in-an-emergency tool, destabilising and traumatic.

That’s why so many Democrats, including House Speaker Nancy Pelosi, resisted calls for impeachment during the first two years of Trump’s presidency. That was smart move, particularly after the smoking gun that was to be the Mueller Report fizzled in the spring.

But the current scandal over Trump’s withholding of foreign aid to Ukraine in lieu of an investigation into Biden has changed everything. Even the most recalcitrant Democrats (well, all but two out of 234 House lawmakers) see Trump’s alleged thuggery as cause for an investigation.

Nevertheless, some of the gravity that should be attendant to impeachment is missing. That’s because there is virtually no chance Trump will be removed by a Republican-led Senate. Similarly, it’s almost a foregone conclusion that the Democratic-led House will move to impeach. There’s drama, yes, but not much suspense.

One reason why the 'quid pro quo' narrative is a fairy tale:

Not only were Ukraine officials unaware aid was even being delayed until a month AFTER the 7/25 phone call… the aid was released WITHOUT any new investigations.

This impeachment case has no basis in reality. pic.twitter.com/hyjSuEUURp

It’s possible some new evidence of Trump’s strong-arming of Ukraine could sway some Republicans. But the GOP seem content to quibble about the process and not contest the facts emerging about Trump’s behaviour. A few have tried to say Trump’s insistence Ukraine investigate Biden does not rise up to the “high crimes” standard, but that’s a tougher row to hoe every day.

The public, meanwhile have been deftly cautious. A majority now support the impeachment “inquiry” while remaining dubious about actual removal. In other words: go see what’s there before we jump to conclusions.

Until the broader public calls for actual removal, GOP lawmakers will stick with Trump, hoping that in the litany of outrages that define the Trump presidency, impeachment is just another blip.

In doing that, they will have diminished what has long been considered a grave and sacred instrument of the Constitution, and brought us a little closer to the chaos visible in the distance. Heaven knows how we find our way back to treating our institutions with the humility they deserve.

What the Trump impeachment scandal really means. A dummy’s guide to impeaching a US president