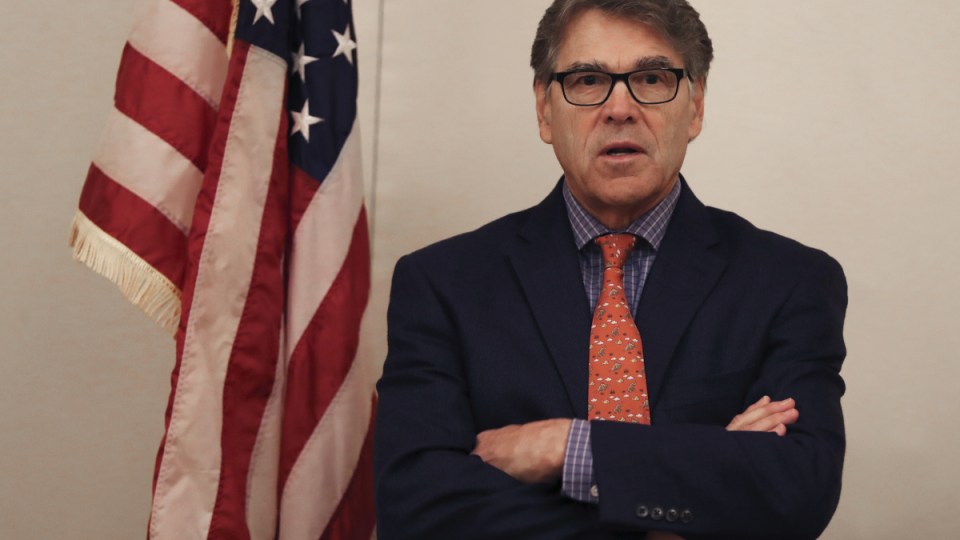 A Trump cabinet member who played a pivotal role in the Ukraine controversy is refusing to testify at an impeachment inquiry against the US president. Photo: AAP

US Energy Secretary Rick Perry, a member of President Donald Trump’s Cabinet who has played a pivotal role in the Ukraine controversy, will refuse to testify as requested next week in the Democratic-led impeachment inquiry against Mr Trump, an Energy Department spokeswoman says.

Mr Perry’s refusal represented the latest instance of Mr Trump’s administration refusing to cooperate in the fast-moving inquiry in the House of Representatives.

Mr Trump said on October 17 that Mr Perry was resigning from his Cabinet post and would step down by the end of the year.

Mr Perry, White House budget office acting director Russell Vought and two other officials were asked to testify on Wednesday next week in a closed session before the three House committees leading the inquiry, an official working on the probe said.

The inquiry focuses on a July 25 telephone call in which Mr Trump asked Ukrainian President Volodymyr Zelenskiy to investigate political rival Joe Biden, a former US vice president and a leading contender for the Democratic nomination to face him in the 2020 election, and his son Hunter, who had served as a director for a Ukrainian energy company.

Democrats have accused Mr Trump of abusing his power and trying to pressure a vulnerable US ally to interfere in an American election for his own political benefit.

State Department counsellor Ulrich Brechbuhl and Under Secretary of State for Political Affairs David Hale also were asked to testify on Wednesday, according to the official working in the inquiry.

“The Secretary will not partake in a secret star chamber inquisition where agency counsel is forbidden to be present,” Energy Department spokeswoman Shaylyn Hynes said in a statement, referring to Mr Perry.

“If the committee is interested in conducting a serious proceeding they are welcome to send for the Secretary’s consideration an invitation to participate in an open hearing where the Department’s counsel can be present and the American people can witness,” Ms Hynes said.

Mr Perry’s refusal to testify marked his latest act of defiance in the impeachment effort. The Energy Department said on October 18 that Mr Perry would not turn over documents subpoenaed by Democrats in the probe, arguing at the time that the impeachment inquiry had not been properly authorised.

In the first formal test of support for the impeachment investigation, the Democratic-controlled House on Thursday voted almost entirely along party lines – 232 to 196 – to move forward with the probe, including public hearings.

Mr Perry was one of three officials – along with Gordon Sondland, a Trump donor who serves as US ambassador to the European Union, and Kurt Volker, the former US special representative for Ukraine – assigned to take the lead on American policy toward Ukraine after Mr Trump abruptly removed the US ambassador in Kiev, Marie Yovanovitch, in May.

Mr Trump’s personal lawyer, Rudy Giuliani, had urged Mr Trump to remove Yovanovitch. Ms Yovanovitch testified in the impeachment inquiry that Mr Trump had ousted her based on “unfounded and false claims” after she had come under attack by Mr Giuliani.

Mr Giuliani has emerged as a central figure in the Ukraine controversy. He pushed for Ukraine to investigate the Bidens. Mr Trump in May instructed senior US officials to coordinate Ukraine policy with Mr Giuliani.

Democrats are considering whether to consider articles of impeachment – formal charges – against Mr Trump. If approved in the House, the Republican-led Senate would hold a trial on those charges and decide whether to convict Mr Trump and remove him from office.

A series of current and former Trump administration officials have testified behind closed doors in the inquiry.

House Speaker Nancy Pelosi said on Friday she expects public hearings in the impeachment inquiry to begin this month.