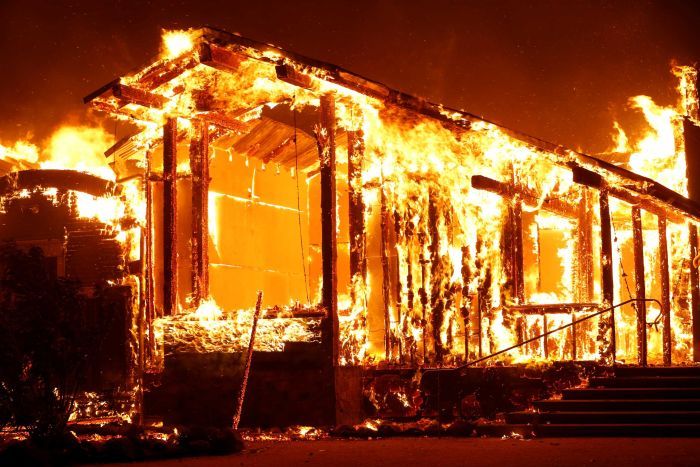 It is believed the fire in Kincade in northern California has destroyed 140 homes. Photo: Reuters

Eric La Franchi says his father and uncles once ran a herd of the world’s best dairy cows on their property in Sonoma County.

Until a few days ago, the walls of the old barn, used for family functions and community events, were covered in old photographs of prize-winning beasts, decked out in sashes from local shows.

But on Friday, the barn is filled with little more than ash, its steel rafters buckling after the massive Kincade fire roared through and took out most of the historic ranch.

“My son was married in this barn,” he says as our feet crunch through more than 100 years of memories on the floor.

Eric seems remarkably cheerful as he shows me around the apocalyptic remains of the place where he grew up and has spent his life.

Three houses – his own, his son’s and his sister’s – all went up in the blaze which has burnt more than 280 structures and about 31,000 hectares of land in the county north of San Francisco.

Most of the barns also burned down, taking with them all of the winter hay for the 600 beef cattle that the property carries.

“I don’t think anyone of us believed we would lose our houses here,” he says.

“I’ve seen a number of fires in this area but none that has encompassed this whole valley.”

Eric’s approach to the fire was based on almost 60 years of life in the area where fires are not uncommon after hot, dry summers which are followed by gusty seasonal winds.

But this time, he and his adult son Logan almost got fatally trapped.

“We didn’t have any grave concerns because we’ve seen a lot of fires in my lifetime,” he says.

The ranch is heavily grazed, providing, you would think, an effective firebreak.

But this time, the fire didn’t skirt around the valley as they previously have.

After inching slowly closer for several hours, the two men were startled when a second fire came at the house from behind.

With fire closing in it was a race for survival.

“We just left the house and ran for our two cars,” he says.

“We went about a quarter of a mile and there was this tree on the road and we immediately had to stop. There were just flames everywhere on both sides of the road and this tree in front of us lit up on fire.”

Eric and his son were forced to turn back and drive towards the flames.

“We came by the main ranch, and we look over and I see my son’s house on fire and flames shooting out of the window,” Eric says.

Again, the pair drove into the flames, this time to the north. At 4am it was pitch dark, but for a wall of flame and smoke.

“Then it starts to get a little terrifying because I am thinking if I have a … flat tyre or something quits and the car stops running, I’m done!”

They reached relative safety when they hit an area that had already burnt.

“It was a terrifying experience,” he says, as he walks around the piles of twisted iron and steel that used to be a farm.

His eyes moisten over the deep sadness of losing his house, the one he grew up in, the one his children grew up in.

“We only took some minimal things,” he says, including an old watch that was his grandfather’s.

“My grandfather Massimo who bought this ranch, I have a gold watch that he had. It doesn’t work anymore but I have it.”

Millions of Californians plunged into darkness as fires rage

Investigations are still underway into what caused the fire, but like several currently burning in California, it’s believed to have been sparked by electricity wires.

That’s despite the company Pacific Gas And Electric (PG&E) cutting power to try to offset the risk.

PG&E is already in deep financial strife after being found responsible and sued for the Camp Fire which burnt further north last year, and was California’s most deadly blaze ever.

“In my opinion, it’s the worst scenario because it precluded us from having any high-pressure water to fight the fire,” Eric says.

Along the roads leading to the ranch, power workers in cherry pickers cut branches from trees and repair fallen wires.

In several places, branches can be seen touching undamaged powerlines.

Cutting power to try to prevent fires has been controversial, with up to 2.5 million people affected in northern California – some for a week or more.

Harry Wetzel is feeling lucky to have escaped the fire with only the loss of a truck and outbuildings at the family vineyard just a few kilometres down the road from the La Franchi ranch.

However, his business is paralysed because the power has been off for almost a week.

He can’t clean up properly or keep the winery operating with the harvest still not complete.

“When the power is out, we can’t crush grapes, we can’t regulate the temperature of the fermentations. So the power outages are almost to a greater extent, are a bigger issue than the fires.”

With smoke taint to worry about for 500 tonnes of unharvested grapes, he’s also concerned about how the lack of power will affect those he’s already begun processing.

California grapples with its ‘new normal’

Californian authorities refer to a “new normal” when it comes to the devastating fires that have affected the state now for several years in a row.

“While wildfires are a natural part of California’s landscape, the fire season in California and across the west [coast] is starting earlier and ending later each year,” the Calfire website says.

The state’s former Governor Jerry Brown, who is now a climate activist, warned Californians this week that “this is only a taste of the horror and the terror that will occur in decades.”

“This is the world we live in. And it will get more dangerous,” he told Politico.

Ranch owner Eric La Franchi is a believer in climate change, but he doesn’t necessarily agree that’s what took his ranch.

“I think there is something to climate change in the way we have affected the environment,” he says, but suggests that in this case, high winds and dry conditions collided in a case of bad timing.

“I think the conditions lined up in the last two big fires in this area and it was really unfortunate events.”

It’s a question of whether unfortunate events are the new normal.