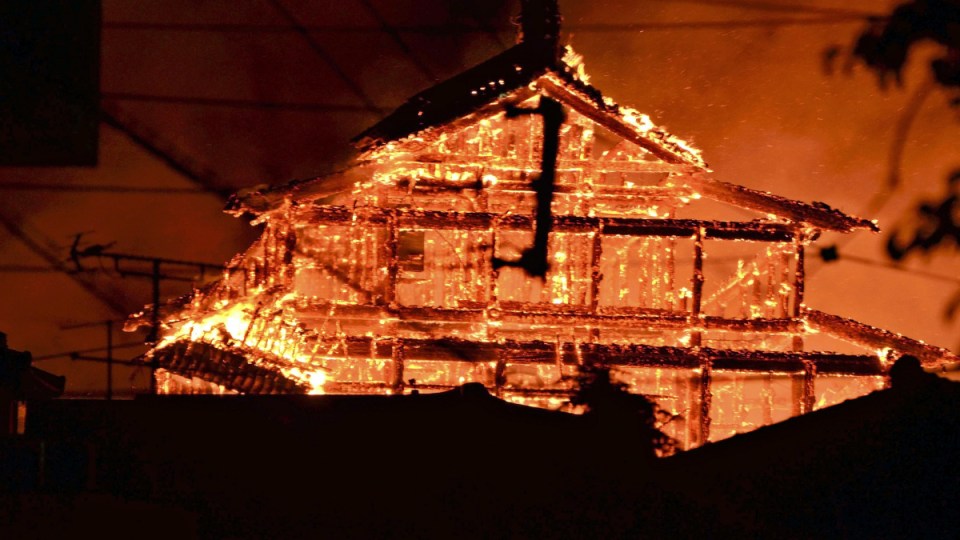 A fire has destroyed much of Shuri Castle, a World Heritage site on Japan’s southern island of Okinawa, with its main hall reduced to a skeleton.

“The cause of the fire has not been determined yet but a security company alarm went off at around 2.30 in the morning,” Ryo Kochi, a spokesman with the Okinawa prefectural police told NHK.

“It started at the main temple and looks to be spreading fast to all the main structures … Firefighters are still battling the fire.”

A popular tourist attraction, Shuri was built in the 1400s as the royal castle of the Ryukyu Kingdom.

Mr Kochi said the castle’s annual mid-autumn festival was behind held this week, and work linked to it had continued until 1am on Thursday. It was not clear whether that was linked to the fire.

The castle had also been scheduled to be included as a stop on the 2020 Tokyo Olympic torch relay route.

Located on a hilltop overlooking the city of Naha and enclosed by curved stone walls, it and its surrounding structures were painted a vivid red, and recognisable by their sloped tiled roofs.

It has been destroyed and rebuilt after many fires – most recently in the Battle of Okinawa in 1945.

After World War II, the castle was used as a campus for Okinawa’s largest public university until the mid 1970s. Following a restoration, it re-opened as a national park in 1992. It was designated a World Heritage site in 2000.

In addition to the main hall, the north and south halls have been destroyed, NHK said.