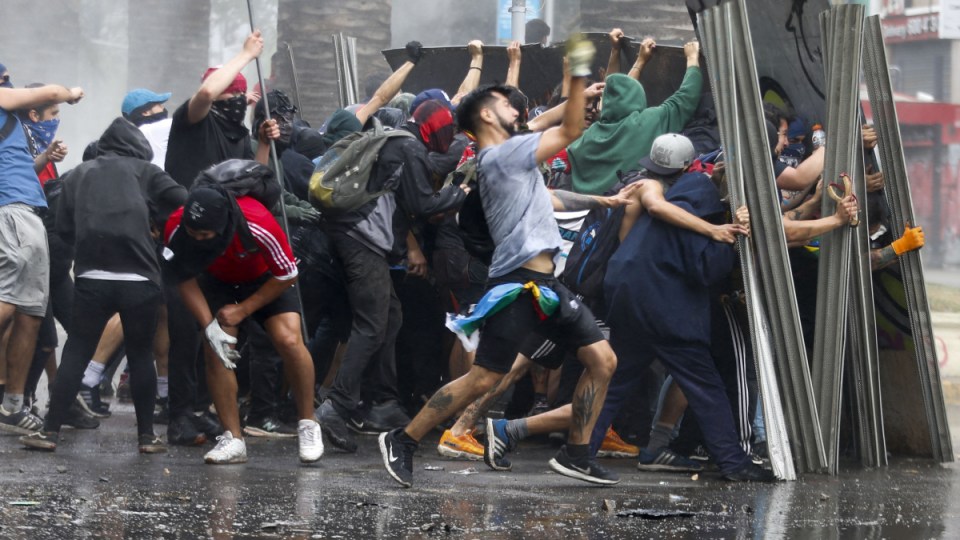 Anti-government protesters take cover against police during a riot in Chile on October 24. Photo: AAP

Scott Morrison’s impending trip to Chile for trade talks appears to be off after the South American nation cancelled the major summit following weeks of violent unrest.

The Prime Minister was due to visit Santiago from November 16-17 for the Asia-Pacific Economic Co-operation gathering.

Once there, he was to meet other world leaders, including US President Donald Trump and Chinese President Xi Jinping.

But Chile abruptly withdrew as host of the APEC summit on Thursday, amid raging street protests that continue to grip the South American country.

The change of heart – which follows weeks of riots over inequality in Chile that have left at least 18 people dead – plunged the APEC meeting into disarray. Participating countries have been caught off-guard and no alternative venue has been lined up.

Chile’s president, Sebastian Pinera – who is fighting for his political survival – said it was a “very difficult decision, a decision that causes us a lot of pain”.

He has also withdrawn from hosting the high-profile COP25 international gathering on climate change in December, saying abandoning both meetings would allow him to focus on restoring law and order and pushing through a new social plan.

“As president to all Chileans, I must always put the problems and interests of Chileans, their needs, their desires and their hopes, first,” Mr Pinera said.

Violent riots in recent weeks have left large parts of Santiago shut down, with the metro transport system suffering nearly $400 million in damage. A total of 7000 people have been arrested and Chilean businesses hit with losses of about $1.4 billion.

President @sebastianpinera, Chair of APEC Chile 2019, announced that APEC Leaders’ Week will not be held in Chile this year. The safety and welfare of Chile and our member economies are APEC’s utmost priority.

“The safety and welfare of Chile and our member economies are APEC’s utmost priority,” she tweeted.

The trade talks were expected to be pivotal for progress between the US and China, who had hoped to sign a modest agreement at the summit.

Under the tentative deal, the US had agreed to suspend plans to raise tariffs on $US250 billion in Chinese imports ($A364 billion), and Beijing had agreed to step up purchases of US farm products.

Meanwhile, the high-profile COP25 – the 2019 United Nations Climate Change Conference – had been due to take place from December 2-13.

It would have brought delegates from about 190 nations to talks aimed at thrashing out details of how to reduce global emissions to meet the Paris climate agreement.

Chile would retain presidency of the meeting, she said.