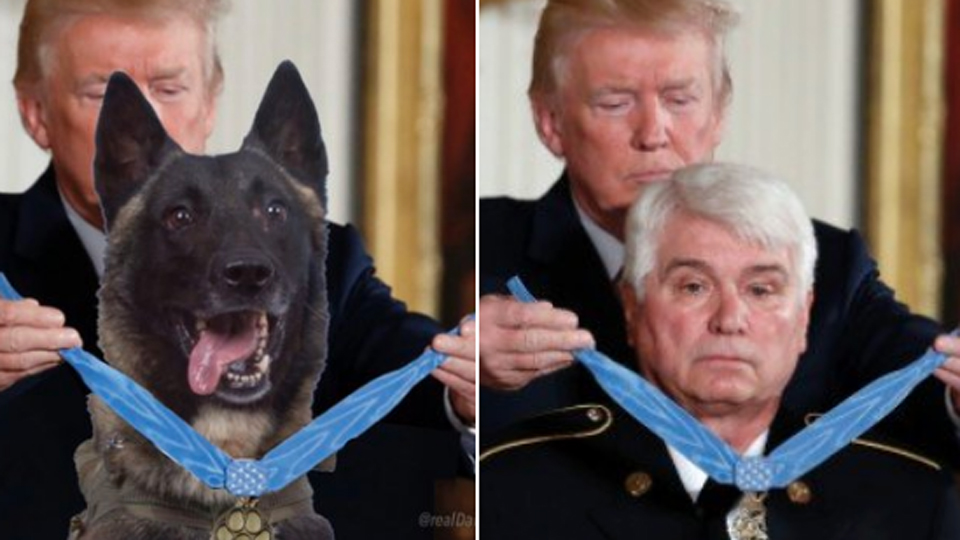 US President Donald Trump has posted a fake photo to social media of him presenting a medal to the “hero” military working dog injured in the deadly raid on Islamic State leader Abu Bakr al-Baghdadi.

An all-caps tweet of “AMERICAN HERO” accompanies the edited picture.

But the altered image was derived from a real photo taken at a 2017 White House ceremony to honour retired US Army medic James McCloughan.

Mr McCloughan was awarded the Medal of Honour for saving the lives of 10 men during the war in Vietnam. The honour is the US’s most prestigious military decoration and is awarded to service members for extraordinary acts of valour.

The original photo of Mr McCloughan was published by The Associated Press. The altered image of Mr Trump honouring the dog was originally posted on the Daily Wire website’s Twitter account.

“This recognises the dog is part of that team of brave people,” he said.

Mr Trump has heaped praise on the military dog, which tracked the IS leader in tunnels beneath a compound in north-eastern Syria.

Al-Baghdadi died after he detonated a suicide vest, killing himself and two children with him. His death was announced by the President in a televised speech from the White House on Sunday (local time).

“Our K-9, as they call – I call it a dog, a beautiful dog, a talented dog – was injured and brought back,” Mr Trump said on Tuesday (local time).

Later that day, he tweeted a picture of the “wonderful dog”, reported to be a Belgian Malinois, but said its name would not be released.

Despite that, many media outlets reported the dog was called Conan. That was confirmed by Mr Trump in a follow-up tweet on late on Wednesday.

“Thank you Daily Wire,” he wrote. “Very cute recreation, but the ‘live’ version of Conan will be leaving the Middle East for the White House sometime next week!”

We have declassified a picture of the wonderful dog (name not declassified) that did such a GREAT JOB in capturing and killing the Leader of ISIS, Abu Bakr al-Baghdadi! pic.twitter.com/PDMx9nZWvw

General Frank McKenzie, who leads US Central Command, said on Wednesday (US time) that Conan was injured when he came in contact with live electrical cables as he pursued al-Baghdadi. He had since returned to duty.

General McKenzie said the dog had worked with special operations forces for four years and taken part in about 50 missions.

He said working dogs like this one are “critical members of our forces.”

THAT DOG DESERVES ALL THE TREATS