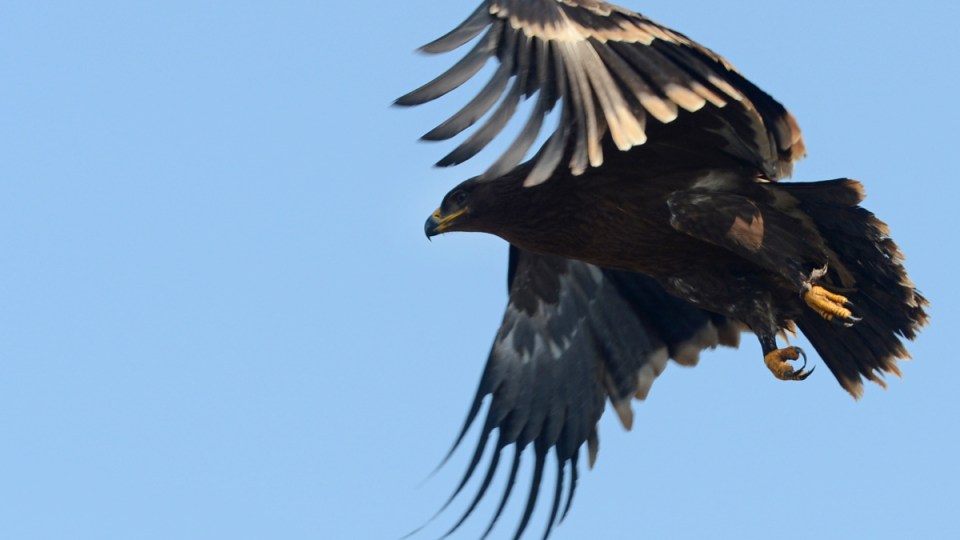 Min, a Russian steppe eagle, accumulated more than $1,000 in text messages in a matter of minutes. Photo: Getty

Intrepid travellers know the pitfalls of global data roaming all too well — spiralling costs and the squeeze of restrictive data allowances.

But Russian scientists forgot to deliver the memo to one particularly adventurous research eagle.

Min, a steppe eagle, formed part of a group of 13 birds Siberian researchers set out to track during their annual migration from Russia to Kazakhstan, and back.

She was fitted with a GPS tracker that delivered intermittent messages back to the research team, from the Wild Animal Rehabilitation Centre at Novosibirsk.

The device was set to Kazakhstan’s reasonably priced rates (15 Russian rubles or $0.34), however, Min had unexpected plans.

Namely, a last-minute sojourn to Iran.

Diverting from the rest of the flock, Min’s decision to travel further south proved costly, with the cost soaring to 49 Rubles ($1.13) per message.

With a backlog of hundreds of texts to send, the eagle single-handedly bankrupted the study.

“She sent us hundreds of expensive SMSs with her summer locations, spending the entire collective budget for our eagles,” Novosibirsk ornithologist Elena Schneider said.

“Expenses are still serious. We cannot let the eagles stop broadcasting – this is a very important study with interesting results.”

The group of volunteer researchers then launched a crowdfunding campaign called “Top up the eagle’s mobile” and successfully recouped more than 100,000 rubles ($2298.57).

But here’s hoping in the future — for the researchers’ sake — these birds of a feather stick together.