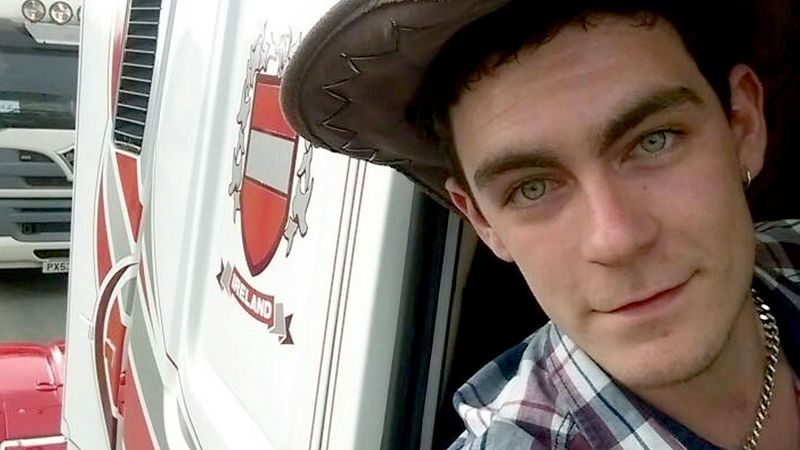 The driver of a truck that was discovered to contain the bodies of 39 people dead inside its refrigerated trailer has been charged with their deaths.

Maurice “Mo” Robinson, 25, was arrested after the bodies of 31 men and eight women were found at an industrial park around 32 kilometres east of London on Wednesday.

Three other people, a man and a woman, both 38, from Warrington, Cheshire, and a 48-year-old man from Northern Ireland remain in police custody.

All three were arrested on suspicion of manslaughter and conspiracy to traffic people.

Another man in his 20s, arrested by police in Dublin, was said to be “of interest” to the Essex Police investigation.

Earlier police said efforts to identify the 39 people were focusing on the Vietnamese community.

Detective Chief Inspector Martin Pasmore said his officers had found “very, very few ID papers” among the bodies and hoped to identify the dead through fingerprints, dental records and DNA, as well as photos from friends and relatives.

Police initially said they thought the victims might be Chinese but have since said they do not want to speculate on the victims’ nationality before they have been formally identified.

The focus on the Vietnamese community comes after a distressing final text message emerged from a young woman identified as 26-year-old Pham Thi Tra My.

“I’m sorry, Mum and Dad. My path abroad was not a success. I love you both so much, the text read.

The message reportedly came from Ms Tra My’s family, and was received at 10.30pm (local time) on Tuesday – two hours before the trailer arrived at the terminal from Zeebrugge in Belgium.

“We don’t know exactly the nationality of our individuals. But at the moment I am going to focus and engage as much as I possibly can within the Vietnamese community,” Mr Pasmore said on Sunday morning.

People from a rural region in central Vietnam have said they fear friends and relatives seeking to move to Britain make up a large number of the dead.

Mr Pasmore, who is in charge of identifying the bodies but not running the criminal investigation, said his colleagues were keeping an open mind about whether the dead were victims of a wider human trafficking conspiracy.

“Criminals and murderers are taking more and more chances with these vulnerable people,” he said.

Mr Pasmore said he had spoken with Vietnam’s ambassador to Britain to seek assistance with fingerprint records.

He said he had also contacted the operator of a Vietnamese community website and hoped Vietnamese people in Britain would “take a leap of faith” and help police identify friends and relatives, even if they were in Britain illegally.