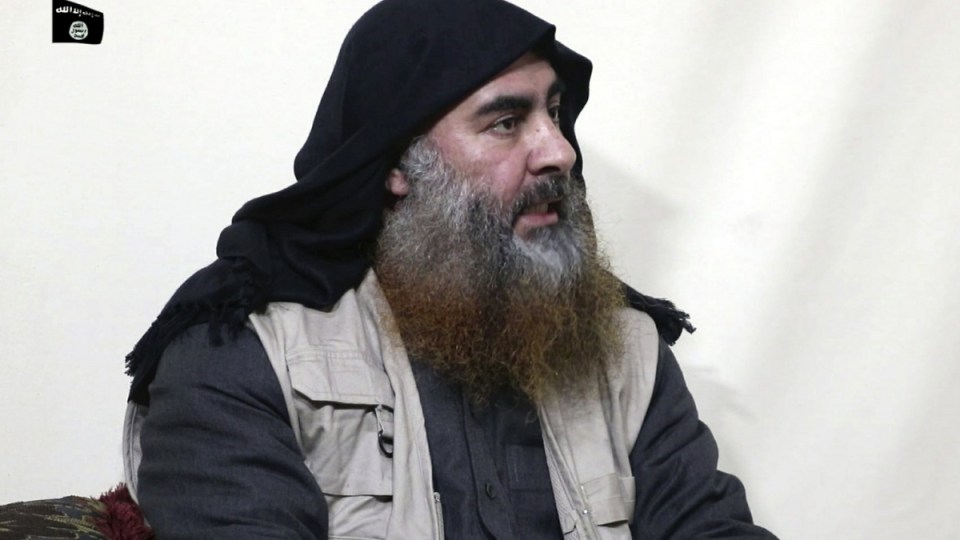 US President Donald Trump has confirmed the death of the world’s most wanted terrorist Abu Bakr al-Baghdadi – adding the founder of Islamic State died “whimpering and crying and screaming all the way”.

Providing graphic descriptions of the death, Mr Trump said the terrorist had detonated an explosive vest after being chased down by military dogs in a compound in north-western Syria. Three children died in the blast.

“His body was mutilated by the blast,” Mr Trump said.

“He was the founder and leader of ISIS, the most ruthless and violent terrorist organisation anywhere in the world,” Mr Trump said in a special announcement from the White House on Sunday (local time).

“Capturing and killing Baghdadi has been the top national security priority of my administration.”

Mr Trump, who had approved the mission nearly a week earlier, confirmed he watched most of the raid as it happened. It unfolded “like a movie”, he said.

The night-time raid had been “dangerous and daring”, the President said, describing it as a mission accomplished “in grand style”

The confirmation comes after the President tweeted on Sunday: “Something very big has happened!”

Mr Trump said three of al-Baghdad’s children died during the commando operation, but claimed it was because the ISIS leader had detonated a suicide vest. He said al-Baghdadi had been chased by military dogs into a dead-end tunnel connected to the house where he was hiding.

US commandos spent hours at the site collecting evidence before the remaining structures were destroyed to ensure they could not become a shrine to the ISIS leader.

After weeks of worldwide condemnation for his decision to withdraw troops from Syria, the killing of al-Baghdadi is a domestic PR coup for the President, although experts pointed out al-Baghdadi’s successor had already been announced by the terrorist group.

It’s not the first time authorities have claimed to have killed the ISIS leader, but Mr Trump claimed DNA tests had confirmed his death.

If he is dead, the military operation brings to an end a five-year international hunt for the man believed to be responsible for thousands of deaths in terror attacks across the globe.

Mr Trump claimed that al-Baghdadi died like a coward.“He didn’t die a hero, he died a coward,” he said. “Crying, whimpering and screaming and bringing three kids with him.”

A US dog was injured in the military operation. “The canine, a beautiful dog, a talented dog, was injured and brought back,” he said.

“He led a murderous, terrorist group responsible for widespread misery and destruction across large parts of Iraq and Syria,” he said.

“He also inspired or directed cowardly attacks by ISIS followers against innocent civilians around the world, some of whom were Australian.

“Al-Baghdadi’s death is a significant blow to ISIS and another important step in preventing its revitalisation. It is important to remember his death does not represent the end of the campaign to defeat this terrorist group and the extremism it embodies.”

Mr Morrison’s statement made no mention of Australia dealing with its own foreign fighters in the region, a point of tension between Mr Trump and Europe.

On Sunday, Mr Trump also criticised European nations for not taking back captured ISIS fighters but did not mention the Australian foreign fighters, or the 66 Australian women and children in refugee camps.

“My people called a lot and said ‘take your ISIS fighters’,” he said.

The US taxpayer was not going to pay to look after other countries’ ISIS fighters, the President said.

Al-Baghdadi had been rumoured to be hiding in Idlib province, an al-Qaeda stronghold on the Syria-Iraq border, for months.

“The US personnel were incredible,” Mr Trump said. “I got to watch much of it. No personnel were lost in the operation. While a large number of Baghdadi’s fighters and companions were killed with him.”

The terrorist leader had recently called for supporters to free ISIS fighters from Syrian prisons.

“Do your utmost to rescue your brothers and sisters and break down the walls that imprison them,” he said in a message distributed by the Telegram app.

Al-Baghdadi’s only public appearance as leader of Islamic State was in July 2014, when he spoke at the Great Mosque in Mosul and declared a caliphate.

US authorities have also accused him of repeatedly raping an American, Kayla Mueller, who ISIS later alleged was killed in a Jordanian airstrike.

After he fled Iraq, US Intelligence believed that he was based in Raqqa, Syria.

In February, The Guardian reported that al-Baghdadi had survived a coup attempt in a village near Hajin, in the Euphrates River valley.

The last claimed sighting of him was in April, when a video was published by the ISIS media wing al-Furqan claiming to show he was alive.

Last year, US officials said al-Baghdadi had been wounded in an airstrike in May 2017 and had to hand over control of ISIS to others because of his injuries.

The US Department of State had classified al-Baghdadi has a “specially designated global terrorist” who was “responsible for the deaths of thousands of civilians in the Middle East, including the brutal murder of numerous civilian hostages from Japan, the United Kingdom, and the United States”.

‘He died like a dog’: Donald Trump claims the scalp of ISIS leader Abu Bakr al-Baghdadi