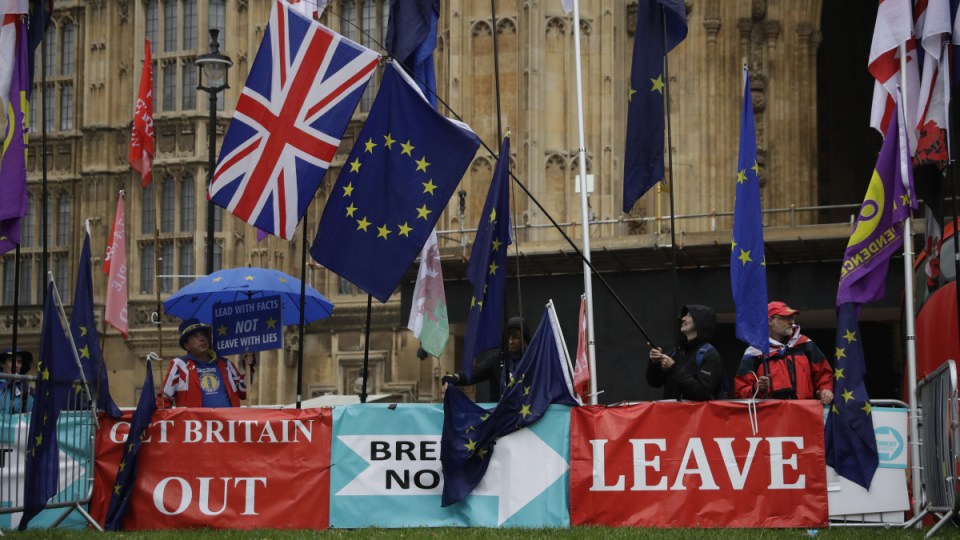 Protesters from both sides of the Brexit debate outside the British parliament on Friday. Photo: AAP

British PM Boris Johnson is pushing for a snap election on December 12 – conceding for the first time that he will not meet his self-imposed deadline to leave the European Union by the end of October.

Mr Johnson said on Friday he would give British politicians more time to debate his Brexit deal, but only if they agreed to a snap election.

The PM has written to Labour leader Jeremy Corbyn, saying a December election would “allow a new parliament and government to be in place by Christmas”.

“If I win a majority in this election, we will then ratify the great new deal that I have negotiated, get Brexit done in January and the country will move on,” Mr Johnson wrote.

“This Parliament has refused to take decisions. It cannot refuse to let the voters replace it with a new parliament that can make decisions.”

Mr Johnson also said his “preferred option” on Brexit was a short postponement – “say to 15 or 30 November”.

Mr Johnson’s supporters see the snap election as the only way to break the deadline on Brexit. It comes after Parliament voted this week in favour of his deal, but then speedily rejected his preferred timetable to allow him to meet the October 31 deadline.

If this Parliament can’t get Brexit done, then we need one that will. I’m determined to lead this country forward 🇬🇧 pic.twitter.com/uzUQGo1g8G

The Tory leader has already twice failed to win enough votes in Parliament to force an election. Under Britain’s legislation for fixed electoral terms, he needs the support of two-thirds of its 650 MPs to go an early national poll.

On Friday (Australian time), Mr Corbyn said he had not decided whether to support Mr Johnson’s push for an early election.

“Take no-deal off the table and we absolutely support a general election,” he told the BBC.

“I’ve been calling for an election ever since the last one because this country needs one to deal with all the social injustice issues – but no-deal must be taken off the table.”

He also said he wanted to see if the European Union agreed to Britain’s request to delay its scheduled October 31 departure. EU envoys were to discuss the request in Brussels on Friday (local time).

“If the EU will answer tomorrow, then we’ll know tomorrow,” Mr Corbyn said.

Mr Johnson has called for a vote in parliament on Monday to decide whether to hold a snap election. Without Labour supporting the push, he will not get the two-thirds majority he needs to call an early election.

The draft text of the EU resolution, which will be debated in Brussels on Friday, has left the new Brexit date blank. It also left open the option of an earlier split.

“Consequently, the withdrawal should take place on the first day of the month following the completion of the ratification procedure, or on [the specified date], whichever is earliest,” it read.

But an EU official said it was unclear if a decision would be reached on Friday as “some might want to see the result of the early election motion”.