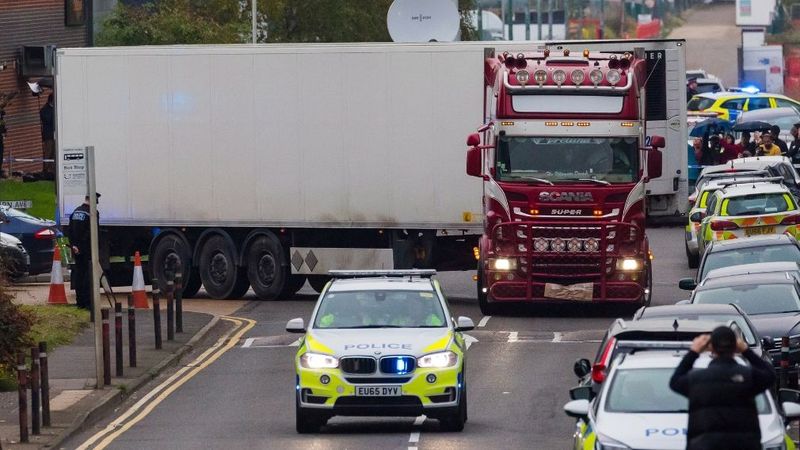 UK Police have confirmed they are moving the vehicle to a secure location. Photo: AAP

Nine people have been found alive in the back of a truck on a British motorway, just hours after the discovery of 39 bodies inside a semi-trailer in Essex.

The nine survivors were found in the back of a truck on the M20 motorway in Kent on Wednesday.

“Nine people are now being checked as a precaution by the South East Coast Ambulance Service before they are passed to Home Office immigration officers,” Kent police said in a statement.

The discovery came after 38 adults and one teenager were found dead inside another semi-trailer in Essex, east of London, earlier on Wednesday after an anonymous call to emergency services.

The driver of the refrigerated truck, 25-year-old Mo Robinson from Northern Ireland, was arrested on suspicion of murder. He is being questioned by police as officers searched two addresses in Northern Ireland.

“We believe the lorry is from Bulgaria and came into the UK through Holyhead on the 19th of October,” she said.

“We have not identified where the victims are from or their identities, and we anticipate that this could be a lengthy process.”

British politicians have speculated the tragedy could be linked to human-trafficking gangs that operate out of Bulgaria. Links to Ireland have also been uncovered.

British Prime Minister Boris Johnston said the perpetrators of the crime “should be hunted down”, while local MP Jackie Doyle-Price said the people smugglers responsible must be caught.

On Facebook, Mr Robinson appears to be a proud truck driver and dad-to-be.

It appears that he started driving a red and white truck, similar to the one where the 39 bodies were found, a year ago.

In October 2018, he posted a photograph on Instagram of the vehicle outside a Scania warehouse and carrying a container marked “M&S – Daily service to and from Scandinavia”.

In 2014, Mr Robinson shared an image of a different truck captioned: “Choose a job you love and you’ll never have to work a day in your life #lifeontheroad #livingthedream”.

Mr Robinson’s pregnant partner and her brother told local media outlet Belfast live that they hadn’t heard from him and didn’t “know what is going on”.

He does not own the truck and might not have been the only driver on the trip.

Police believe the trailer travelled from Zeebrugge in Belgium into Purfleet in Britain. It docked in the Thurrock area after 12.30am on Wednesday.

The tractor unit originated from Northern Ireland while the truck is registered to a Bulgarian company in the city of Varna – “under the name of a company owned by an Irish citizen”, according to the country’s ministry of foreign affairs.

Bulgarian authorities said they could not confirm that the truck had started its journey there.

Bulgaria is infamous for its people-smuggling gangs.

CCTV footage shows the truck just moments before it pulled into the industrial estate where the grisly find was made.

The semi-trailer has a sticker on its windscreen that reads: “The Ultimate Dream”.

The East England Ambulance Service said it was alerted to the bodies by a phone call early on Wednesday morning. It could not confirm who made that call.

Both discoveries came as Britain’s National Crime Agency said the number of migrants being smuggled into the UK in containers and trucks had risen in the past year.