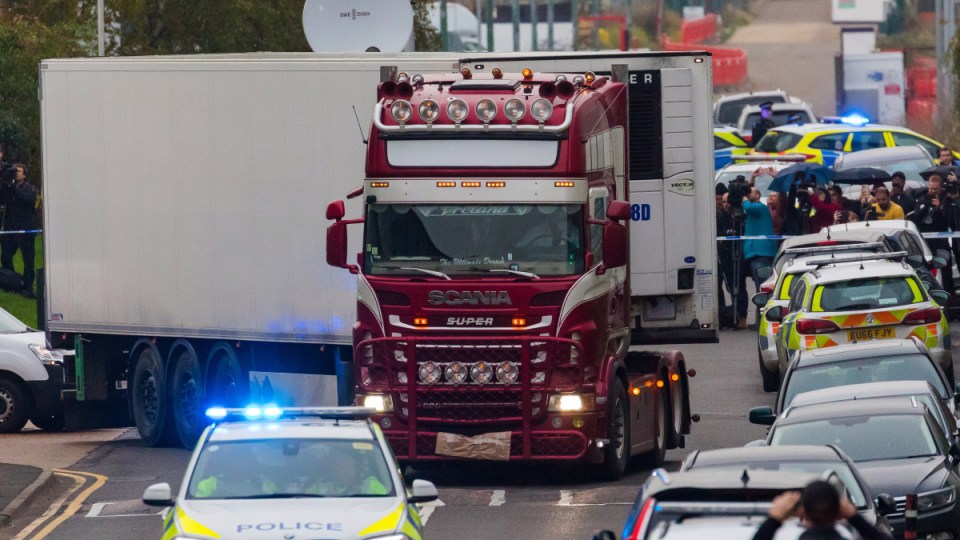 Essex Police have confirmed the 39 people found dead in the back of a refrigerated truck near London were Chinese.

A media statement released about 10pm on Thursday AEDT said a 25-year-old truck driver from Northern Ireland remains in custody.

He was arrested on suspicion of murder.

Of the victims, 38 are believed to be adults, and one is a young adult woman – thought previously to have been a teenager.

Eight of the deceased are women.

“We continue to work diligently to piece together the circumstances of this horrific event, which has led to the largest murder investigation in our force’s history,” the police statement read.

“Our work continues today, and for the foreseeable future, to be focused on providing the victims and their loved ones with an investigation that is filled with dignity, compassion and respect for those who have died.

“Our lines of enquiry are extensive and will be thorough. This means that we might not have all the answers straight away.”

Police said the key facts that had been established were that:

Police were called to Waterglade Industrial Park at Grays by the East of England Ambulance Service in the early hours of Wednesday, local time .

Three properties in County Armagh have since been searched in connection with the investigation, which has been linked to people smuggling.

Police said each of the 39 people must undergo a full coroner’s process to establish a cause of death, “before we move on to attempting to identify each individual within the trailer”.

“This will be a substantial operation and, at this stage, we cannot estimate how long these procedures will take,” the statement read.

The deaths follow warnings from the National Crime Agency (NCA) and the Border Force of the increased risk of people-smuggling via Belgium and into quieter ports such as Purfleet.

The NCA previously said it had a “greater focus” on rising smuggler numbers in Belgium after the closure of a migrant camp, and a Border Force assessment highlighted Zeebrugge as being among “key ports of embarkation for clandestine arrivals”.

The NCA has also warned that criminal networks are suspected to have started targeting quieter ports on the east and south coasts of the UK as well as the main Channel crossing between Calais and Dover.

The vehicle has been moved to a secure site at nearby Tilbury Docks, where the bodies can be recovered and further forensic work undertaken to begin what police said would be the lengthy process of identifying the victims.

The National Crime Agency said it was assisting the investigation and working to “urgently identify and take action against any organised crime groups who have played a role in causing these deaths”.

Shaun Sawyer, the national spokesman for British police on human trafficking, said many thousands of people were seeking to come to the United Kingdom.

While they were able to rescue many of those smuggled into the country, Britain was perceived by organised crime as a potentially easy target for traffickers.

“You can’t turn the United Kingdom into a fortress. We have to accept that we have permeable borders,” he told BBC radio.

Essex Police confirm all 39 victims in truck tragedy were Chinese