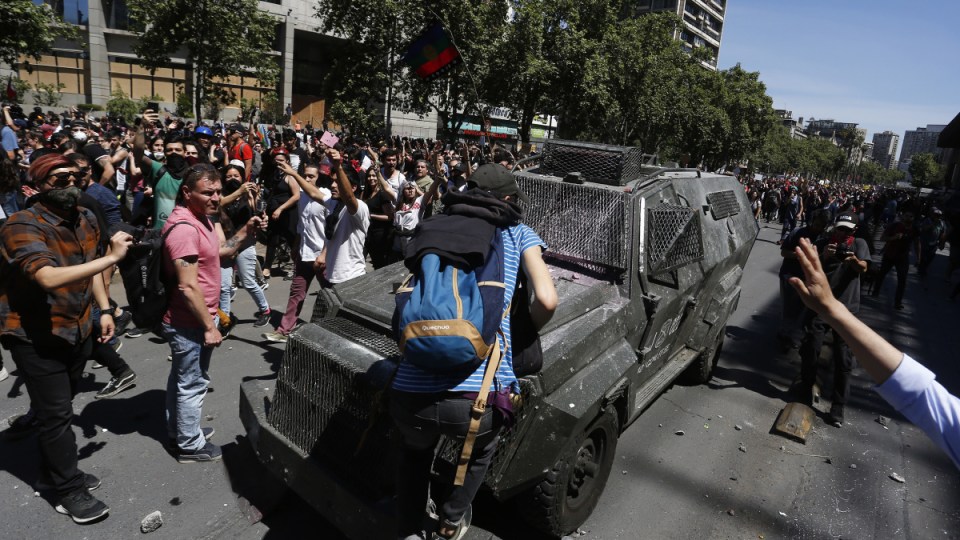 Thousands of Chileans have poured into Santiago’s central squares to protest high living costs after a weekend of looting, arson and clashes with security forces killed 11 people.

The unrest has prompted President Sebastian Pinera to declare the country “at war” with vandals.

Buses and metro networks were partially restored for people to return to work but many opted instead to join the biggest demonstrations in years in what is normally one of Latin America’s most stable countries.

The crisis was sparked by protests over a hike in public transport fares but reflects simmering anger over intense economic inequality in Chile, as well as costly health, education and pension systems seen by many as inadequate.

Banging drums and pans, blowing whistles and many waving signs calling for Mr Pinera’s removal, the largely youthful and peaceful crowd filled Santiago’s Plaza Italia and overflowed into surrounding streets, watched from the sidelines by soldiers and police and hovered over by helicopters.

Camila Tapia, a 23-year-old student from the poor La Pintana neighbourhood of Santiago said she was there to represent her elderly parents, former manual labourers.

“I am here because of my parents and because of my son, because we can’t take it anymore, we are tired of injustice,” she said. “And it is everything: health, education, housing…”

A fresh curfew was announced by Javier Iturriaga, the general in charge of Santiago’s security, to run from 8pm on Monday until 6am on Tuesday in the city.

Several Chilean cities have been placed in a state of emergency, with control handed to the armed forces after looting, arson attacks and violent clashes began on Friday.

The union of BHP’s Escondida copper mine workers announced a day-long strike on Tuesday in solidarity with the protests.

Finance minister Felipe Larrain said the civil unrest would “undoubtedly” have a “significant” impact on the economy.

Dr Jaime Manalich, the health minister, said 239 civilians had been injured in three days of unrest, while the death toll was updated to 11. Interior Minister Andres Chadwick said one man had died from gunshot injuries in the northern province of Coquimbo.

Mr Pinera and his ministers have said the vandalism and arson attacks on businesses and property are coordinated.

“We are at war against a powerful enemy, who is willing to use violence without any limits,” Mr Pinera said in a late-night televised statement at army headquarters in Santiago.

UN human rights boss Michelle Bachelet, a former president of Chile, called on Monday for independent investigations into the deaths in weekend protests there, citing “disturbing allegations” of excessive use of force by security forces.

In Santiago, most schools and businesses remained closed on Monday.

Walmart Chile said more than 100 of its grocery stores had been looted, and in some cases burned.