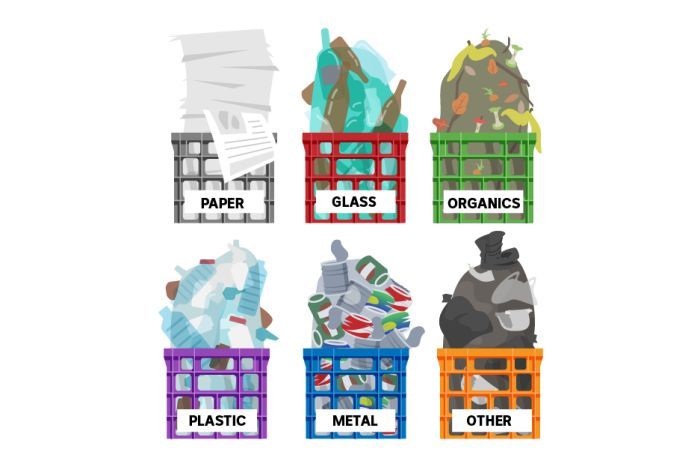 Victorian households could be separating rubbish into six or more bins — instead of the usual two or three — to help solve the state’s recycling crisis.

It is one of several proposed ideas to rescue the state’s collapsed recycling sector, published in an interim report to the State Government by Infrastructure Victoria.

“It’s very important that we have very clean streams of materials that are easy to recycle,” Elissa McNamara, the project director at Infrastructure Victoria, said.

“The system where everything’s all put in the one bin has been around for 20 years, and we haven’t updated that.

“The glass gets broken, paper and cardboard get tiny particles of glass in it … they’re so mixed up and contaminated that it’s really hard to extract a high-value material that can be recycled.”

It was that contamination that led China to make its momentous decision to stop importing foreign waste for recycling in 2018, sparking Victoria’s recycling crisis.

Since then, waste from Victorian recycling bins has either gone to landfill or been stockpiled, creating massive fire risks.

“In the past, we’ve really been able to just set and forget,” Ms McNamara said.

“Now, we’ve had this global shock that really requires us to urgently reconsider how we deal with our recycling.”

The proposed six-bins system could involve separating rubbish into stackable crates that would be carried out to the kerb on something similar to a removalist’s trolley.

The report proposes a range of other options to solve the recycling crisis — such as making better use of food waste, which currently makes up more than one-third of household rubbish going to landfill.

It calls for a “waste-to-energy” policy, where some of that food waste is converted to low-emission electricity — something that is already happening on a small scale in Victoria.

Other options include pushing manufacturers to use more recycled products instead of raw materials, reforming the landfill levy and a crackdown on packaging and single-use plastics.

While the report is upbeat about the possibility of creating a viable industry for recycled materials, it also makes clear that it will not happen without major changes to kerbside collection.

“All the evidence tells us that if you want a high-quality recycling system, you need more separation by householders before the waste gets into the system,” said Toby Brennan, a consultant who researched overseas solutions to the recycling problem on behalf of Infrastructure Victoria.

He was particularly impressed with Wales — similar in scale to Victoria, but with a 50 per cent higher household recycling rate.

“Wales has become one of the top recycling countries in the world,” he said.

“They don’t have three bins, they have six. And instead of the typical waste truck that we’re used to, where the bin goes on the back, it might have seven or eight different compartments along the side for different types of waste.”

Mr Brennan said market research suggested it was a change many Victorians would be willing to make.

“Most surveys of Victorians show that they are willing to do more separation at home. At the moment we’re not giving them the opportunity to participate, and to add value to the recycling system,” he said.

There will be a real-world test of that willingness this summer in the City of Hobsons Bay in Melbourne’s inner south-west. It will be trialling an extra bin for glass and another for food waste.

Other inner-city councils are already trialling an expanded bin system.

Those trials will be watched closely, because the research also reveals some scepticism.

A quarter of people surveyed believe their recyclables are going to landfill anyway.

When it comes to a container deposit scheme, the report is lukewarm — saying it needs to be considered alongside a broader reform of kerbside recycling.

And the report also makes clear that any change to the system of household bins has to be consistent across all councils, to maximise the value of an education campaign.

“I think people would be shocked to know that in the last 15 to 20 years, we’ve basically doubled the amount of waste that we’re generating in Victoria,” she said.

“There are a lot of efforts being made to maximise the amount of recycling, but we really need to move with the times.”

The report has been released for public discussion before final recommendations are delivered next year.

Key options in the report: