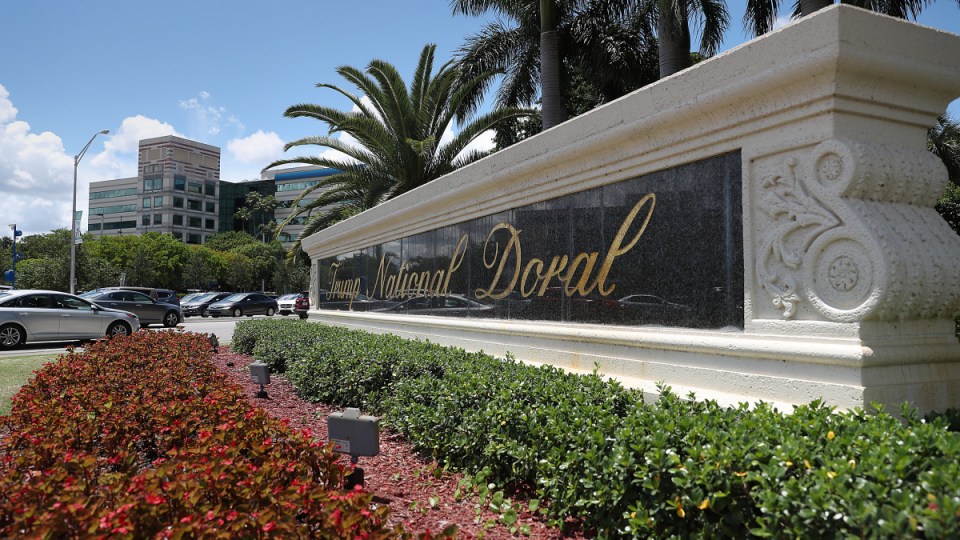 Donald Trump has reversed a decision to host the 2020 G7 at one of his own resorts. Photo: Getty

US President Donald Trump has abruptly reversed his plan to hold next year’s G7 world leaders’ meeting at his Doral golf resort in Florida.

Mr Trump’s acting chief of staff suggested the President was concerned about how it would look.

Mr Trump announced a rare backtrack on Saturday night after facing accusations he was using the presidency to enrich himself by hosting the international Group of Seven summit at the private resort owned by his family.

“Based on both Media & Democrat Crazed and Irrational Hostility, we will no longer consider Trump National Doral, Miami, as the Host Site for the G-7 in 2020,” Mr Trump tweeted.

Mr Trump had repeatedly said he would not profit from hosting the G7 at Doral. But the move comes as he faces ongoing criticism and congressional investigations over his finances and potential conflicts-of-interest.

The President has also been criticised previously for hosting foreign leaders, including China’s President Xi Jinping and Japan’s Prime Minister Shinzo Abe, at his Mar-a-Lago golf club in Florida.

On Saturday, he said his administration “will begin the search for another site, including the possibility of Camp David, immediately”.

So interesting that, when I announced Trump National Doral in Miami would be used for the hosting of the G-7, and then rescinded due to Do Nothing Democrat/Fake News Anger, very few in Media mentioned that NO PROFITS would be taken, or would be given FREE, if legally permissible!

The striking reversal raises further doubts about the position of Mr Mulvaney, who is the Republican President’s top aide.

Mr Mulvaney held a news conference on Thursday announcing the choice of Doral for the summit.

He insisted his staff had concluded it was “far and away the best physical facility”.

Mr Mulvaney said the White House had made its choice after visiting 10 sites across the country.

On Sunday, he claimed Mr Trump was “honestly surprised at the level of pushback” after the Doral announcement.

“At the end of the day he still considers himself to be in the hospitality business,” Mr Mulvaney told Fox News Sunday.

“He wanted to put on the absolute best show, the best visit that he possibly could and he was very confident in doing that at Doral.”

Days after being the face of the selection, Mr Mulvaney again held a national stage, but this time reversed his position.

“I think it’s the right decision to change,” he said.

Trump backtracks on plan to host G7 at his own resort