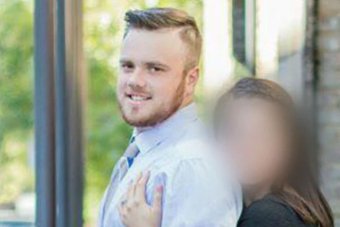 Harrowing audio has been released of Angeleanna Estorffe struggling to tell an emergency dispatcher her Australian husband was dying after being shot by intruders in their Texas family home.

“Someone just broke into my house and shot my husband,” Mrs Estorffe says frantically during the 911 call.

Brenton Estorffe and his wife were asleep when the intruders broke a window at the rear of their home in Katy, near Houston, just after midnight on Wednesday.

Their one-year-old and three-year-old children were also sleeping in the home.

Mr Estorffe bravely confronted the intruders but was shot in the chest.

The emergency call, released on Monday (Australian time) by the Fort Bend county sheriffs, captures Mrs Estorffe’s shock and terror as her husband gurgled for breath on their lounge room floor.

Mrs Estorffe is clearly terrified the intruders are still nearby and concerned for her children.

“How long before the cops are here?

Sheriffs have also released video of what they think could be the suspects’ vehicle. It is a light-coloured four-door sedan with what is believed to be a sunroof.

The car was captured on a neighbour’s residential surveillance camera just before the shooting. It was seen leaving the Estorffes’ house just after shots were fired.

One intruder is described as being possibly “dark-skinned”, 180 centimetres tall, of medium build and wearing a dark-coloured hoodie.

The second intruder had dark-coloured skin, was 182 centimetres tall, with a slim build and had a buzz haircut.

A $US25,000 ($A36,472) reward has been offered for information leading to the capture of the men. A GoFundMe page has also been set up to raise money for Mrs Estorffe and her children.

Mr Estorffe, 29, was from Mooloolaba on Queensland’s Sunshine Coast.

He moved to the US in 2011 to play American football and study at South Virginia University.

He had been working for a car rental company in Texas.

Fort Bend County Sheriff Troy Nehls has vowed to find the killers. He also had praise for Mr Estorffe’s heroic efforts to save his wife and children.

“He gave his life in defence of his family. What more honour can you bestow on an individual than that?” Sheriff Nehls said.

Police are investigating whether the break-in was a case of mistaken identity with authorities baffled about why the Estorffes were targeted.