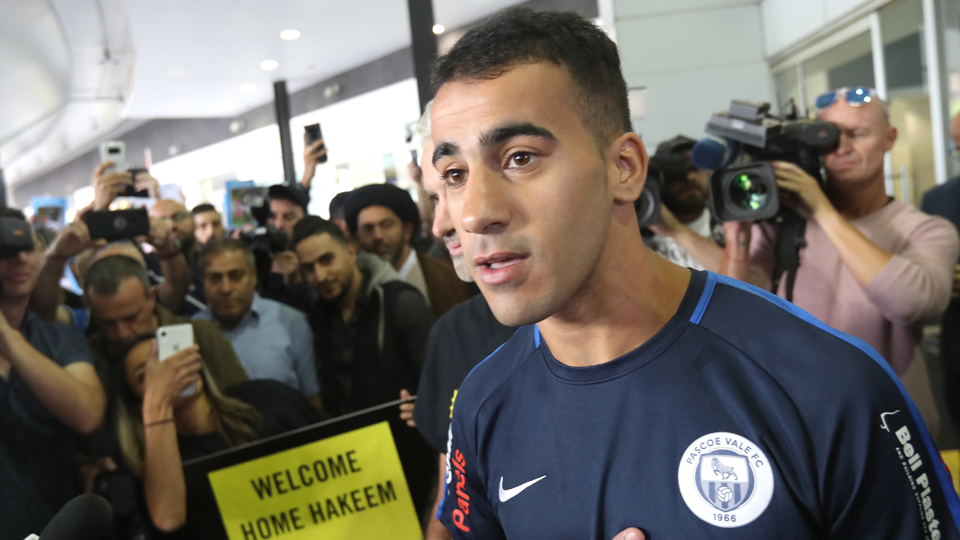 The new boss of the Australian Federal Police has apologised to Hakeem al-Araibi for the 77 days he spent detained in a Thai jail. Photo: Getty

Australia’s new top cop has personally apologised to refugee footballer Hakeem al-Araibi for the months he spent behind bars in Thailand.

Al-Araibi, a permanent Australian resident, was locked up in Bangkok after Bahraini officials pursued him over vandalism charges.

He spent 77 days in prison.

Mr Kershaw said he was now working with the Department of Home Affairs to address a “lack of connectivity” between border security systems and the Interpol database.

“I have delivered a letter to Mr al-Araibi to extend AFP’s apology for his unfortunate detention in Thailand,” he told a Senate committee in Canberra on Monday.

“And to reassure Mr al-Araibi that the AFP is continuing to review and improve processes in consultation with other relevant agencies to ensure we respond appropriately to these matters in the future.

“The AFP is working closely with the department to resolve the overarching policy and legal questions arising from this matter.”

Mr Kershaw, who has been in the job less than a month, has been briefed on the circumstances surrounding al-Araibi’s detention.

“I extend my apologies for your unfortunate detention in Thailand in November 2018,” he wrote to the footballer.

“Please be assured that this is in no way related to your protection status, as the AFP had no awareness you had been granted protection in Australia until after your detention.

“The AFP is continuing to review and improve processes in consultation with other relevant agencies, so that we respond appropriately to these matters in the future.”

Al-Araibi was held in Bangkok after an Australian Border Force officer neglected to inform the AFP and Department of Home Affairs that al-Araibi was under protection.

This would have prevented Thailand being alerted to an Interpol red notice issued against him.

Amnesty International welcomed the apology but said more needed to be done.

“An apology, albeit belated, is the very least Hakeem should expect for the ordeal he and his family endured,” campaigner Tim O’Connor said.

“We look forward to the Department of Home Affairs also offering an apology to Hakeem and his family … it is the failure of home affairs systems and communications that led to Hakeem’s detention in Thailand.”

Mr O’Connor said it was troubling that more than 10 months after the bungle, the systems of Australian government departments were still not fixed.

“What happened to Hakeem could happen to someone else,” he said.

“Australian taxpayers should receive an independent and transparent inquiry so we can all have trust in our government’s systems.”