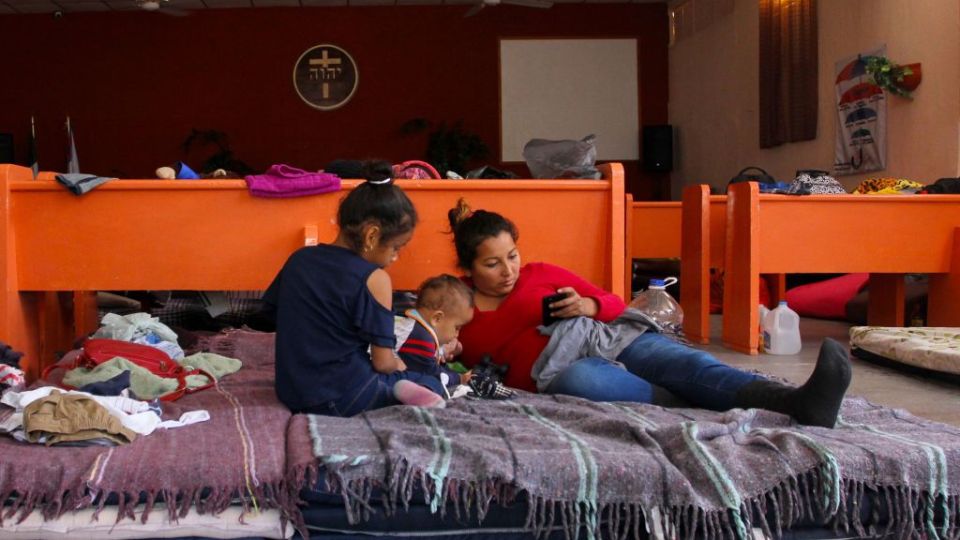 Alvin*, a smart and brash, 30-year-old from Nicaragua, left his home country earlier this year when he began receiving death threats, sparked after attending a rally for a political party opposing the government.

Braving the exhaustion, hunger, weather extremes and regular confrontations with robbers that such a journey entails, Alvin walked from the Nicaraguan capital, Managua, through Honduras and Guatemala.

He crossed Mexico’s southern border with Guatemala in April.

He’s been living in Albergue Buen Pastor, a migrant shelter on the outskirts of the border city of Tapachula, ever since.

“I want to go to the United States”, he tells The New Daily.

Alvin says he’s glad he crossed into Mexico in April. He’s heard that it’s gotten harder to do so lately.

Indeed. In his thunderous quest to stop immigration from south of the US border, President Donald Trump recently gained an unequivocal ally in the Mexican government.

On June 7, the Mexican government agreed to tighten its controls on the thousands of people who regularly attempt to enter the country via its southern border with Guatemala in the hope of reaching the US.

Mexican President Andrés Manuel López Obrador (known by his initials, ‘AMLO’) agreed to the controls after President Trump threatened to impose steep tariffs on Mexican exports to the US, unless AMLO cracked down on the passage of migrants through Mexico to the US border.

As such, the journey for the thousands of migrants like Alvin who regularly arrive at the Mexico/Guatemala border, fleeing violence and poverty in Nicaragua, Honduras and El Salvador – as well as in several Caribbean and African nations – just got harder.

Those hoping to clear the penultimate crossing into the US now face around 6000 troops from Mexico’s newly created National Guard, and a dramatically increased chance of being detained or deported along with it.

Meanwhile, in the border city of Tapachula, hundreds wait in migrant shelters like Buen Pastor for clearance to travel further north.

Hundreds more are living in the shanty town that has sprung up next to Tapachula’s immigration offices, populated by hundreds of migrants from Haiti and Cuba as well as Cameroon, Nigeria and Ghana.

The New Daily visited this makeshift neighbourhood and met Jeff*, a 28-year old tradesman from Haiti.

He says that if he leaves Tapachula before receiving papers showing he has permission to travel within Mexico, “soldiers will board the bus and check my status and I’ll be deported”.

Olga Sánchez Martínez is the founder of Albergue Buen Pastor.

She tells The New Daily that numbers approaching the shelter for help peaked in November with the passing through Tapachula of one of the largest caravans of migrants ever seen in these parts; describing it as “the beginning of the humanitarian crisis we’re seeing now”.

Albergue Buen Pastor was initially founded to support migrants who lose body parts attempting to cross into the US – the majority from trying to board ‘The Bestia’, the infamous network of freight trains that runs across Mexico – well known for taking the limbs of migrants, if not their lives.

Around 2004, the Australian Embassy donated 150,000 pesos (around $10,000) for the construction of the shelter, where The New Daily has seen hundreds of residents passing the time in the overbearing summer heat by doing various maintenance tasks like cleaning or serving coffee, or simply sitting in the shade, often watching their children.

Conditions at the shelter are more than basic: The building is crumbling, there is scant food and water available, and the residents sleep on old mattresses, in rusty bunk beds, or in tents on the grounds.

Raul*, 21, a quiet young man with a sweet smile, has made the journey from Honduras because his family needs medicine for his younger sister, who has a chronic illness.

“I heard that I could get the medicine in Mexico. If I can get it and send it to my family, it will help her,” Raul said.

Of President Trump’s threats and the Mexican government’s capitulation, Ms Sánchez says she doesn’t think much will change for migrants, or at least for those who come through the shelter.

“The Mexican border isn’t like the US border,” she tells The New Daily.

“There’s no great river or desert that they have to pass through.”

If people need to leave their homes and they see a way to do so, however life-threatening, they will keep coming.

It’s true that crossing the border from Guatemala to Mexico has always been easier than doing the same from Mexico to the US, where conditions in detention centres have been described as “horrifying”, thousands of migrant children have been separated from their families, and US border patrol is known to bring out tear gas.

President Trump has said he is directly inspired by Australia’s approach of using deliberate cruelty to deter migration.

Mexicans in the US have been a referent for President Trump in his diatribes against migration. In campaigning for the presidency, he described them as “drug dealers, criminals, and rapists”.

But migrants entering Mexico do not typically have an easy ride, especially those from Central America, whose numbers have outstripped those of Mexicans attempting to cross the US border in recent years.

The likelihood of detention, deportation and discrimination in their quest to enter and transit through the country is high.

Mexico also agreed this year to President Trump’s ‘Remain in Mexico’ policy whereby asylum seekers granted a hearing in a US immigration court are required to stay on the Mexican side of the US-Mexico border until their case can be heard – an experience that can be long and arduous.

Now it seems, Mexico’s government is simply determined to try even harder to emulate the controls of its powerful neighbour.

Highway checkpoints have been instituted to catch out migrants en route to the US (the ‘soldiers boarding buses’ that Jeff referred to).

More than 29,000 migrants were detained in Mexico in June – the largest number in a single month on record in recent history, and conditions in the centres have deteriorated.

Seeking a life free of violence and poverty, Alvin, Jeff and Raul made it to Mexico – against the odds of a dangerous migrant route and an increasingly hostile regional policy towards those who don’t have the financial latitude to leave their countries in another way.

Despite Mexico’s low levels of employment and high levels of violence, this is where they will be staying for the immediate future; likely longer.

It remains to be seen what the effect will be of the US and Mexican governments agreeing to pincer desperate people between their borders, if not to repel them altogether.

But whatever it is, that desperation and those people’s determination to live a better life aren’t going anywhere.

Ann Deslandes is an Australian freelance journalist based in Mexico City