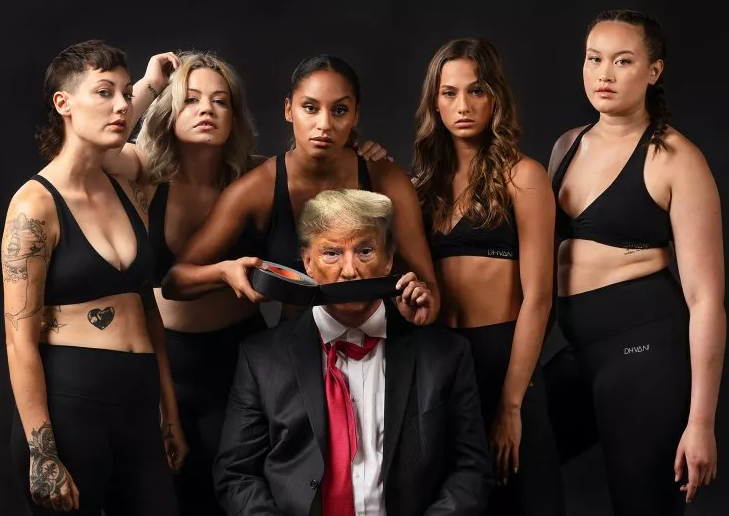 The Democrats haven't been able to silence Donald Trump. These Dhvani models reckon industrial tape is the solution. Photo: Dhvani

Donald Trump hog-tied and with a strong woman’s foot jamming his head into a rock — a fantasy of opponents who detest his anti-abortion stance and sexist language, right?

Well not for those catching the sights in New York’s famous Times Square, where a huge, new and controversial billboard depicts the US President trussed, helpless and getting the worst of it from former Marine-turned-model Michal Mesa.

In the background dark clouds hover over a White House in flames as an American eagle flees.

Buy our athletic wear if you hate Donald Trump, is the message from clothing outfit Dhvani, which has ignited a storm of controversy beyond Manhattan, where more than 90 per cent of voters backed Hillary Clinton at the 2016 election.

A Dhvani spokesperson said the 10-metre billboard, part of an all-media ad campaign, aims to highlight Mr Trump’s opposition to abortion, in part by likening him to Adolf Hitler.

“We are proud to join Planned Parenthood in defending women from assaults on our reproductive rights,” said Dhvani’s chief communications officer, Chloe Mason.

But the towering depiction was too much even for Planned Parenthood, normally a ferocious Trump critic, which disassociated itself from the campaign almost from the minute the billboard was unveilled on Friday.

During the 1936 Berlin Olympic games, when Hitler was in full power, the founder of German company Adidas asked the legendary Jesse Owens to compete while wearing shoes he designed – an act of rebellion. pic.twitter.com/TNjcLy4d2s

“Our staff members have faced threats and acts of violence for doing their jobs, and many of our patients turn to us as their safe space for care after facing violence in their lives.

“We do not condone violence or violent imagery against anyone.”

Another ad in Dhvani’s campaign features a Trump lookalike caught with his pants down on a golden lavatory as an African-American model wearing the company’s activewear confiscates his mobile phone.

“Our goal with Lady Liberty is two-fold; one, sell lots of activewear so we can make a massive donation and make a difference directly. Two, bring a lot of attention to this President’s war on women’s reproductive rights,” Dhvani CEO Avi Brown said.

“The images we produced for this campaign artistically express the frustrations we believe many American women share, and are metaphorical in nature only. Dhvani does not and will never condone violence of any kind.”

One of those frustrations, according to a third ad image, is Mr Trump’s motor-mouth ranting against critics and political enemies. Dhvani’s solution: gag him with industrial tape.

That imagine of Mr Trump straining against a gag might be closer to life than Dhvani ever anticipated.

Asked to comment on the ad campaign, the White House has so far remained resolutely silent.