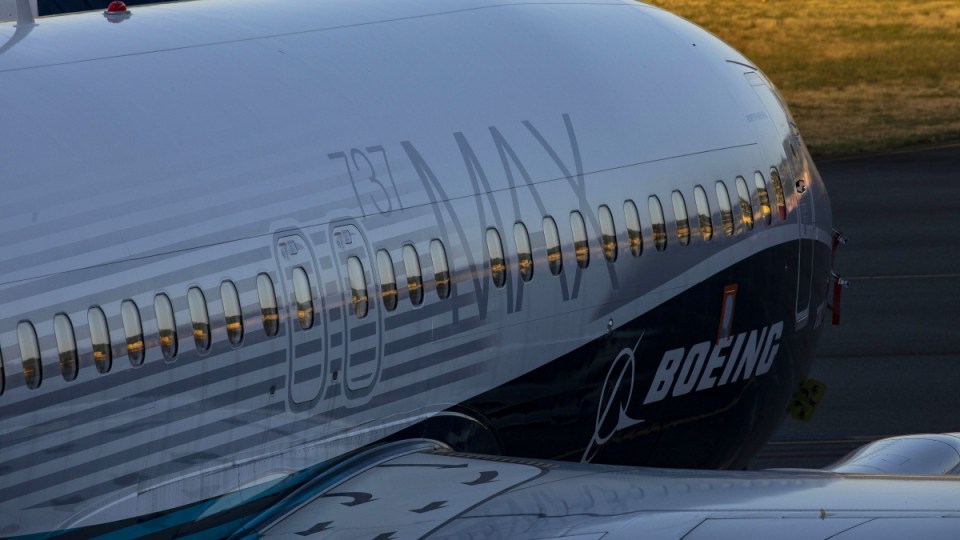 A Boeing pilot working on the 737 Max said in messages from 2016 that a new automated system was making the plane difficult to control in flight simulators, more than two years before it was grounded following two deadly crashes. Photo: New York Times

For months, Boeing has said it had no idea that a new automated system in the 737 Max jet, which played a role in two fatal crashes, was unsafe.

But on Friday, the company gave lawmakers a transcript revealing that a top pilot working on the plane had raised concerns about the system in messages to a colleague in 2016, more than two years before the Max was grounded because of the accidents, which have left 346 people dead.

In the messages, pilot Mark Forkner, who played a central role in the development of the plane, complained the system, known as MCAS, was acting unpredictably in a flight simulator: “It’s running rampant.”

The messages are from November 2016, months before the Max was certified by the Federal Aviation Administration. “Granted, I suck at flying, but even this was egregious,” he said sardonically to a colleague, according to a transcript of the exchange reviewed Friday by The New York Times.

The Max crisis has consumed Boeing, and the revelation of the messages from Forkner come at a particularly sensitive time. The company’s chief executive, Dennis Muilenburg, is scheduled to testify before two congressional committees, on Oct. 29 and Oct. 30, the first time a Boeing executive has appeared at a hearing related to the crashes.

Boeing’s stock lost 7 per cent of its value on Friday, adding to the financial fallout.

The existence of the messages strike at Boeing’s defence that it had done nothing wrong regarding the Max because regulators cleared the plane to fly, and potentially increases the company’s legal exposure as it faces civil and criminal investigations and multiple lawsuits related to both crashes.

Facing competition from Airbus, Boeing worked to produce the Max as quickly as possible, striving to minimise costly training for pilots. Last week, a task force of 10 international regulators released a report that found Boeing had not fully explained MCAS to the FAA.

“This is more evidence that Boeing misled pilots, government regulators and other aviation experts about the safety of the 737 Max,” Jon Weaks, president of the Southwest Airlines Pilots Association, said in a statement on Friday.

Boeing has maintained that the Max was certified in accordance with all appropriate regulations, suggesting there was no sign MCAS was unsafe.

That contention was central to the company’s rationale in not grounding the Max after the crash of Lion Air Flight 610 last October, and in waiting days to recommend grounding the plane after the second crash, of Ethiopian Airlines Flight 302 in March.

It was only after data suggested that MCAS played a role in the second crash that Boeing and the FAA decided to ground the Max.

Forkner was the chief technical pilot for the Max and was in charge of communicating with the FAA group that determined how pilots would be trained before flying it. He helped Boeing convince international regulators that the Max was safe to fly.

In the messages, he said that during tests in 2016, the simulator showed the plane making unexpected movements through a process called trimming.

“The plane is trimming itself like crazy,” he wrote to Patrik Gustavsson, a fellow 737 technical pilot at Boeing. “I’m like WHAT?”

Forkner went on to say that he had misled the FAA.

“I basically lied to the regulators (unknowingly),” Forkner says in the messages, although it was not clear what he was specifically referring to.

“This is the smoking gun,” Rep. Peter DeFazio, D-Ore., said in an interview. “This is no longer just a regulatory failure and a culture failure. It’s starting to look like criminal misconduct.”

Senator Richard Blumenthal said he expected answers from Boeing’s chief executive and board of directors.

“They must be held accountable if Boeing was deceptive or misleading in failing to report safety concerns,” Blumenthal said in an interview.

“What these reports indicate is that Boeing’s own employees lied and concealed the truth.”

The Times, which was the first to disclose Forkner’s involvement in the plane, previously reported that he had failed to tell the FAA that the original version of MCAS was being overhauled, leaving regulators with the impression that the system was relatively benign and would be used only in rare cases.

Eight months before the messages were exchanged, Forkner had asked the FAA if it would be OK to remove mention of MCAS from the pilot’s manual. The FAA, which at the time believed the system would activate only in rare cases and wasn’t dangerous, approved Forkner’s request.

Another exchange, in a batch of emails among Forkner, Boeing colleagues and FAA officials, was also reviewed by The Times on Friday. In one email from November 2016, Forkner wrote that he was “jedi-mind tricking regulators into accepting the training that I got accepted by FAA.”

A lawyer for Forkner downplayed the importance of the messages, suggesting Forkner was talking about issues with the simulator.

“If you read the whole chat, it is obvious that there was no ‘lie’ and the simulator program was not operating properly,” the lawyer, David Gerger, said in a statement. “Based on what he was told, Mark thought the plane was safe, and the simulator would be fixed.”

Mr DeFazio, who as chairman of the House Transportation and Infrastructure Committee is overseeing the investigation into the crashes, said he had reviewed other internal Boeing documents and emails that suggested employees were under pressure to produce planes as fast as possible and avoid additional pilot training.

“Boeing cannot say this is about one person,” DeFazio said. “This is about a cultural failure at Boeing under pressure from Wall Street to just get this thing out there and make sure that you don’t open the door to further pilot training.”