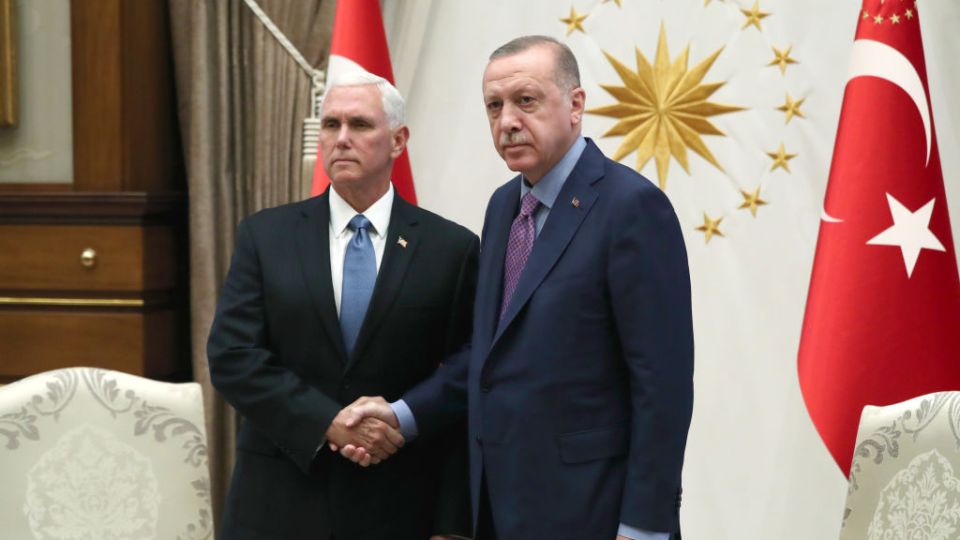 The US and Turkey have agreed to a ceasefire in Syria.

Turkey has agreed to “pause” its military offensive in Syria after talks with the US but has stopped short of calling it a ceasefire.

US Vice President Mike Pence announced a deal had been struck with Turkish President Recep Tayyip Erdogan to halt the action against Kurdish forces which started eight days ago.

Mr Pence said all military operations would be paused for 120 hours to allow the Kurdish YPG militia to retreat from northeast Syria.

Once that withdrawal was complete, the Turks would end their military operation.

Turkey’s incursion has created a new humanitarian crisis in Syria with 200,000 civilians taking flight and fears that jailed IS fighters could get loose.

Donald Trump hailed the deal as an “incredible outcome” saying the decision would save Kurdish lives.

“I want to thank all of the people that have gotten together and made this happen,” Mr Trump said.

This is a great day for civilization. I am proud of the United States for sticking by me in following a necessary, but somewhat unconventional, path. People have been trying to make this “Deal” for many years. Millions of lives will be saved. Congratulations to ALL!

However Turkey’s foreign minister Mevlut Cavusoglu was careful to describe the agreement as a “pause” in military operations and “not a ceasefire”.

“We will pause the operation for 120 hours in order for the terrorists to leave,” Mr Cavusoglu said. “We will only stop the operation if our conditions are met.”

Mr Pence said the deal was a commitment to a peaceful resolution of Turkey’s demand for a “safe zone” in northern Syria near Turkey’s border.

“Today the United States and Turkey have agreed to a ceasefire in Syria,” Mr Pence said after more than four hours of talks at the presidential palace in Ankara.

“The Turkish side will pause Operation Peace Spring in order to allow for the withdrawal of YPG forces from the safe zone for 120 hours,” Pence said.

Mr Pence said US forces in the region had already begun to facilitate a safe disengagement of YPG units.

Mr Trump has been accused of abandoning Kurdish-led fighters, Washington’s main partners in the battle to dismantle Islamic State’s self-declared caliphate in Syria, by withdrawing troops from the border as Ankara launched its offensive on October 9.

Mr Trump had defended his move on Wednesday as “strategically brilliant”, contracting the official assessment of both the defence department that the offensive was a disaster for regional stability.

Meanwhile a leaked letter from Mr Trump to the Turkish president, sent after US troops were pulled out of Syria, showed the US president asking his counterpart to: “Don’t be a tough guy. Don’t be a fool!”

Turkey’s assault, launched after a call between Mr Erdogan and Mr Trump, forced Washington to abandon a strategy in place for five years and pull its troops from northern Syria.

Ceasefire in Syria: Turkey agrees to put guns down for five days to let Kurds escape