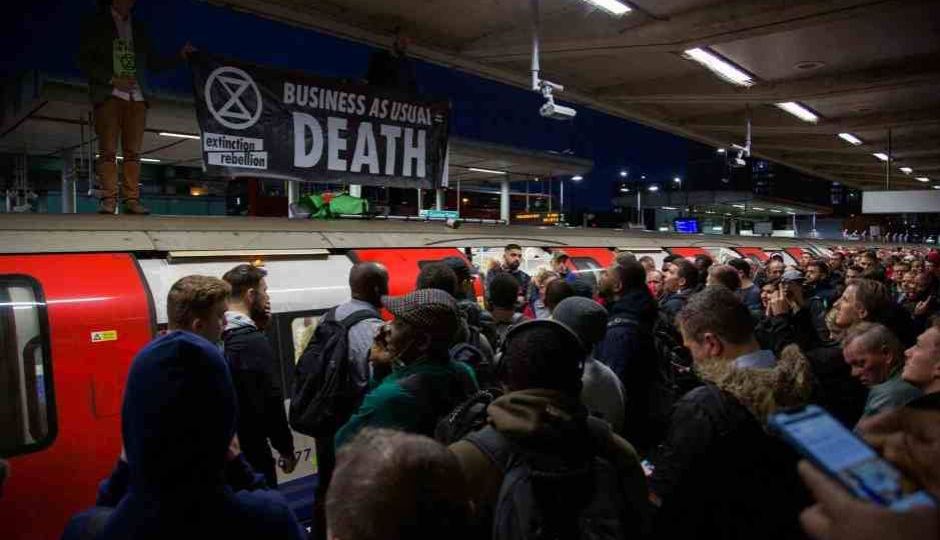 Police said the violence from the crowd was "unacceptable". Photo: Extinction Rebellion

A crowd of angry London commuters have dragged two Extinction Rebellion protesters off a train as the pair attempted a climate action demonstration during peak hour.

Footage shared on social media shows two activists standing on top of the Tube in front of a shouting crowd at Canning Town, in east London.

UK newspaper The Telegraph reported one of the activists was chased along the train roof before also being pulled down to the platform.

A video shared on Twitter shows a transport worker shielding a protester as a group of shouting people closed in around him.

Elliot Laughlin, an independent journalist, told the BBC the crowd attacked him when they saw him filming the demonstration.

“They attempted to pull the two protesters from the top of the train, they then turned on me because I had two cameras on my tripod,” he said.

“About 20 Londoners beat me down and I was there for several moments in the foetal position being kicked for reporting on the news, essentially.

“Luckily, three Londoners came over and got on top of me and protected me and I’m very grateful to those individuals that did that.”

Furious #London commuters have been pulling #ExtinctionRebellion protesters off the top of a train at #canningtown stationpic.twitter.com/p7aiTmzYkt

British Transport Police are appealing for information and footage of the incident, with Assistant Chief Constable Sean O’Callaghan condemning the violent outburst.

“Understandably, the delay to passengers’ journeys would have been annoying, but this level of response was unacceptable,” he said.

“It is important that commuters and other rail users allow the police, who are specially trained, to manage these incidents.”

Extinction Rebellion demonstrations were also held at Stratford and Shadwell, in coordinated disruptions at about 6.45am, local time.

Several protesters glued themselves to the trains.

In a statement, the climate action group said the train protest had received “overwhelming opposition” when it was first announced.

“This concern was communicated to the planners of the action — a very small group, which did not participate in ‘national level’ Rebellion decision-making bodies,” an Extinction Rebellion spokesperson said.

“Very few people in XR wanted this to happen, but the ‘post-consensus’ organisational model which we currently employ is such that it happened all the same.”

The statement called for activists to remember “the love that brings us together”.

“These were commuters trying to get to work so they can support their loved ones,” the spokesperson said.

“We recognise that disruption at Canning Town affected those already suffering the hardships of a toxic system — those who are the most at risk from the effects of climate and ecological collapse.”