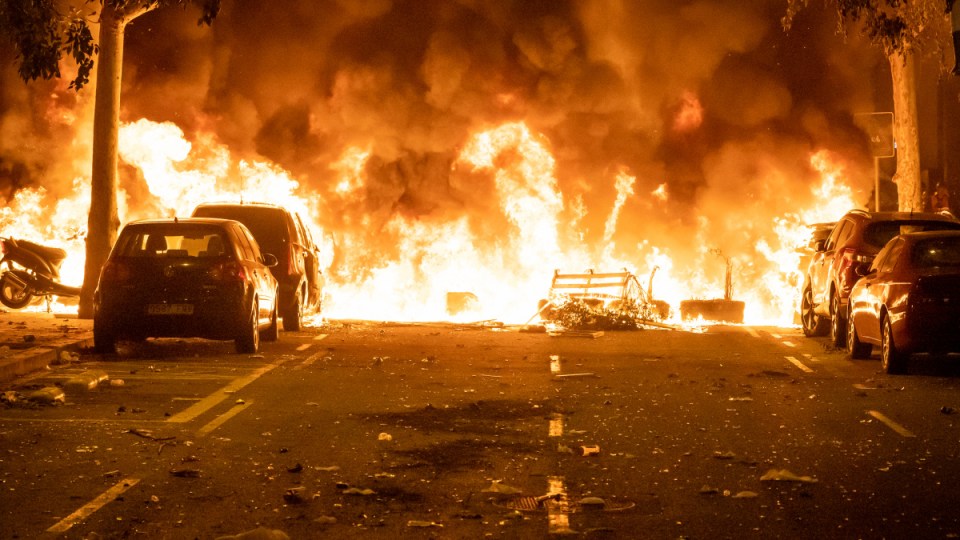 Peaceful demonstrations in Spain have deteriorated into clashes between police and protesters. Photo: Getty

Protesters have set cars on fire and thrown petrol bombs at police in the Spanish city of Barcelona, intensifying unrest sparked by the sentencing of Catalan separatist leaders who had sought to declare an independent state.

Divisions over a drive to split the northeastern region of Catalonia from Spain roiled the country in 2017, and resurfaced on Monday when the Supreme Court sentenced nine politicians and activists to up to 13 years in jail.

Peaceful demonstration throughout Wednesday deteriorated after nightfall into clashes between police and protesters, prompting regional government leader Quim Torra to demand an immediate return to normality.

“We condemn violence,” Mr Torra said in a televised address after midnight, according to a translation of the Catalan language provided by Spain’s state broadcaster.

“We cannot let these incidents happen in our country. This has to stop right now.”

Acting Prime Minister Pedro Sanchez said the government would act firmly and proportionately, and in concert with other political parties.

“The Catalan people and all of Spanish society must know that the government is considering all scenarios,” Mr Sanchez told a news conference in Madrid.

He added that the government had set up a special commission including the national intelligence agency to advise it on how to manage the situation.

Sanchez will lead his Socialist Party to Spain’s second election this year on November 10, under pressure from right-wing parties to be tougher on Catalonia and take control of the region’s security forces.

Mr Torra joined one march near the separatist stronghold of the town of Girona, which he later said was an example of the right way to protest the court decision.

At sunset, several thousand people, many of them young, congregated along a wide avenue in central Barcelona, waving pro-independence flags and throwing toilet paper in the air.

As the situation worsened, emergency services said 52 people had been treated in the course of the day for injuries sustained in Barcelona and other towns in the region.

Since Torra’s predecessor, Carles Puigdemont, held a referendum banned by Spanish courts, Catalonia has been closely watched by other European countries where there are also movements for independence, such as Scotland.

Spain is now trying for a third time to extradite Puigdemont, who has been living in self-imposed exile in Belgium, but the Brussels prosecutor’s office said on Wednesday it may take weeks to reach a decision.