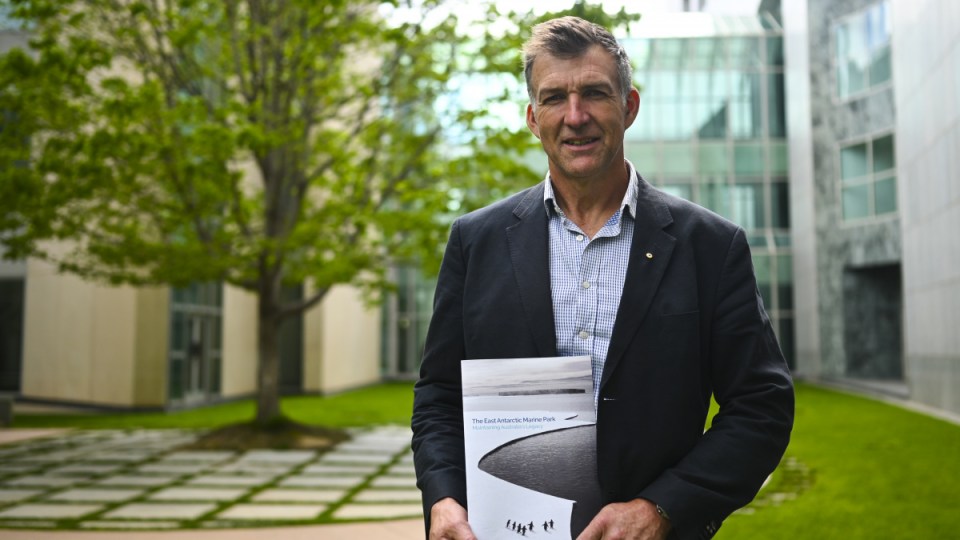 He traced the footsteps of shipwrecked explorer Ernest Shackleton, whose imperative was to save his men from Antarctica.

A century on, Tim Jarvis is making it his mission to save Antarctica from man.

He was the first person to cross the world’s highest, windiest and coldest continent on foot but now the environmental scientist is leading a diplomatic charge to double the expanse of ocean in the region placed under protection.

Mr Jarvis has spent a year-and-a-half in Antarctica’s icy wilderness, once losing 20 per cent of his body weight tugging a 225 kilogram sled for 90 days in minus 40-degree temperatures.

So he’s all too familiar with the dire situation it faces.

“If there’s a Venn diagram of the science around understanding what’s going on down there and then the personal experience of seeing what we’re doing, I sit in the middle of that,” Mr Jarvis said on Thursday.

He and the Australian government are pushing the 25 member nations of the Commission for the Conservation of Antarctic Marine Living Resources to make a new, million-square-metre marine park.

The area sits in Australia’s own slice of Eastern Antarctica but all 25 nations must agree when they meet in late October for the proposal to succeed.

Similar initiatives have struck opposition from China and Russia but Environment Minister Sussan Ley is urging her counterparts to act in the spirit of the Antarctic Treaty.

“Every country is entitled to pursue its own interests in the region but I would simply say if you look at the overarching imperatives of the treaty they are peace and science,” she told reporters at Parliament House.

Mr Jarvis says creating the park – and hopefully others like it – could be the difference between extinction for many of the continent’s unique marine life.

From the krill and plankton at the bottom of the food chain to penguins and whales at the top, protection from fishing and the like is needed to fortify their populations to withstand climate change.

“If you don’t protect those resources, you risk disrupting the whole global food web in the ocean,” he said.

“You’re not going to head off climate change but you’re going to make them more resilient to it.

“If it could all be protected, that would be fantastic but if we could get this million square kilometres it would be a huge step in the right direction.”

When asked if the government’s support on this issue goes far enough in protecting the invaluable ecosystem, Mr Jarvis chose his words carefully.

“Ironically, most of the changes we need to make are back here,” he said.

“You want to protect Antarctica, we need to change the way we do things back in the rest of the world … in the cities where 75 per cent of us live, where we consume the energy that contributes to the CO2 emissions.”