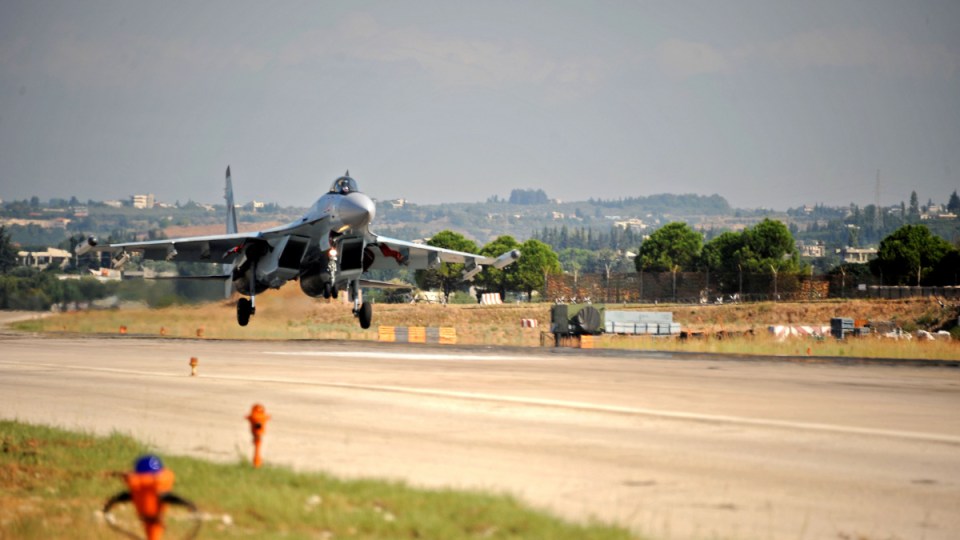 A fighter jet takes off at the Russian military base of Hmeimim, located south-east of the Syrian city of Latakia. Photo: Getty

Now in its seventh day, Turkey’s offensive against Kurdish fighters has caused tens of thousands to flee their homes, has up-ended alliances and is re-drawing the map of northern Syria.

But Russia moved quickly to further entrench its role as a power broker after US President Donald Trump ordered the pullout of American forces in north-eastern Syria.

The American move effectively abandoned the Kurdish fighters who were allied with the US and cleared the way for Turkey’s invasion aimed at crushing them.

The Kurdish administration has struck a deal with the Russia-backed government of Syrian President Bashar Assad, whose forces have moved into Kurdish-administered areas to shield them against Turkey.

Syrian troops waved flags after they rolled into Manbij, a flashpoint town west of the Euphrates River that Turkey had been aiming to capture and wrest from Kurdish control.

Video film by Russian journalists with the troops showed what appeared to be an abandoned outpost where US forces had been stationed.

US troops have been positioned there since 2017, when they went in to avert a battle over the town between Turkish and Kurdish fighters.

“No one is interested” in fighting between Syrian government troops and Turkish forces, said Alexander Lavrentyev, Moscow’s envoy for Syria. Russia “is not going to allow it,” he told Russian state news agencies.

But Kelly Craft, the US Ambassador to the United Nations, told reporters Washington is “deeply concerned” that Russian troops are patrolling between the two sides.

However, Russian Defence Minister Sergei Shoigu has spoken to US Defense Secretary Mark Esper to discuss “issues of mutual interest in the context of situation in Syria,” the Russian Defense Ministry said in a brief statement.

US Vice President Mike Pence will head to Turkey on Wednesday in an effort to negotiate a ceasefire in Syria, Donald Trump said, amid calls for tougher sanctions on Ankara.

President Trump is facing intense criticism over his withdrawal of US troops from Syria which critics say paved the way for the Turkish incursion, abandoned the once US-allied Kurds and set the stage for a resurgence of Islamic State.

The vice president is expected to be accompanied by Secretary of State Mike Pompeo and National Security Adviser Robert O’Brien.

Turkey launched its military offensive a week ago to clear a border region from Syrian Kurdish forces linked to outlawed Kurdish militants in Turkey. Erdogan said that “we cannot declare a ceasefire until we clear this region.”

Some Republicans have also issued rare criticism of Mr Trump over the troop withdrawal.

Mitch McConnell, leader of the Republicans in the Senate, applauded the Pence delegation to Turkey.

“I expect the Turkish allies to listen carefully to the anger from Washington, welcome our vice president and take steps to repair our important relationship,” he said in a statement.