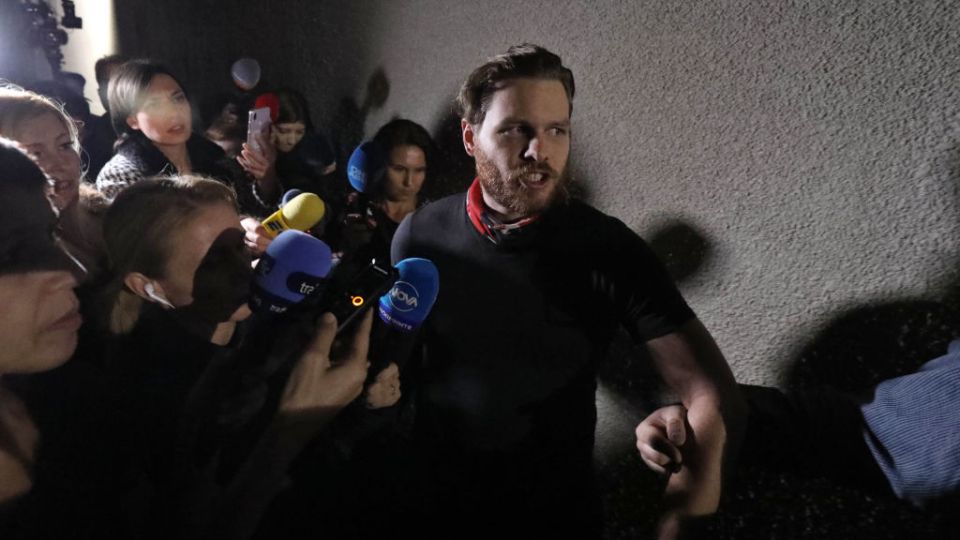 Jock Palfreeman is hounded my media after being released from Busmantsi Detention Centre. Photo: Getty

Australian Jock Palfreeman has been released from detention in Bulgaria but is still not allowed to leave the country.

Palfreeman, 32,  was released from Busmantsi Detention Centre in Sofia on Tuesday evening local time but authorities are reportedly still holding his passport and he is banned from leaving the country.

He has spent the last 11 years behind bars for the December 2007 stabbing murder of 20-year-old student Andrei Monov, and is hoping that the Bulgarian Supreme Court decision with overturn his parole.

Ministry officials have said Palfreeman had to stay in the country until the travel ban was lifted.

“He will have to show up at an interior ministry office once a week until a ban to leave the country, issued back in 2011, is lifted,” Nikolay Nikolov, the head of the Interior Ministry’s migration unit, told reporters.

Aside from the weekly visit to the ministry, he will be free to live normally in Bulgaria while awaiting the decision.

Australia says they have issued him an emergency passport and he should be permitted to go home, however, Palfreeman told local media on Tuesday that he would rather stay in the country than return home.

“If I had a choice, I would stay in Bulgaria … I have great confidence in the Bulgarian people who have protected me so far,” he said outside the Bursmanti Detention Centre.

“For 12 years, everyone who protected me are Bulgarians. I have great confidence in the people here.”

He was found guilty of murder in 2009 and sentenced to 20 years in jail, before being granted parole two weeks ago.

Palfreeman has maintained he acted in self-defence after he came to the aid of two gypsies being assaulted by Bulgarian Andrei Monov and his friends.

Mr Monov’s father is an influential former member of parliament.

Recently released CCTV footage appears to show the men hurling objects at Palfreeman, knocking him to the ground, and then surrounding him when he tries to run away.

Palfreeman’s parole has angered nationalist politicians in the Balkan country and has prompted the chief prosecutor to ask for a review of the ruling by the country’s highest court, which now has two months come up with a decision.
The case has strained relations between Bulgaria and Australia with Foreign Minister Marise Payne expressing “deep disappointment” that Palfreeman was still in custody after being granted parole.
-With AAP
Follow Us