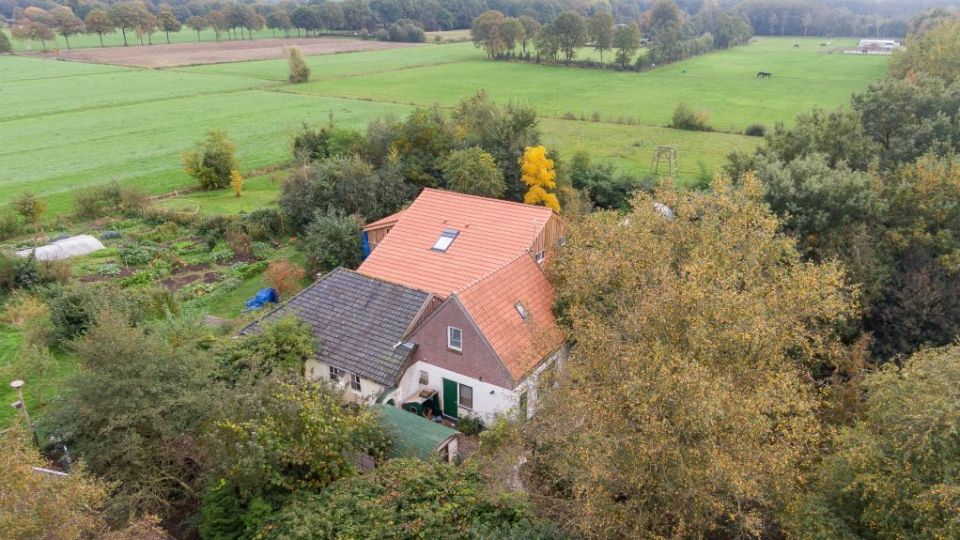 An aerial picture taken on October 15, 2019 shows a view of the farm. Photo: Getty

Six siblings aged between 18 and 25 have been found living in a secret room on an isolated farm in the Netherlands after one of them escaped and went to the pub.

The family spent nine years in the basement “waiting for the end of time” at the secluded property in the village of Ruinerwold in the northern province of Drenthe.

They had apparently had no contact with the outside world for nine years.

A 58-year-old man, who was not the father of the children, was arrested at the farm. His role remains unclear.

According to local media, the eldest brother, who is 25, turned up at a bar in the nearby village of Ruinerwold and ordered five beers.

Bar owner Chris Westerbeek said the man had long hair and a dirty beard. He looked confused and spoke in a childish voice.

“He ordered five beers and drank them. Then I had a chat with him and he revealed he had run away and needed help … then we called the police,” Mr Westerbeek told RTV Drenthe.

“He said he had brothers and sisters who lived at the farm. He said he was the oldest and wanted to end the way they were living.”

Mr Westerbeek contacted police, who went to the property. There they found a cupboard that hid a secret staircase down to the basement where the family was living.

“I have never come across anything like this before,” local mayor Roger de Groot told a media conference.

“They lived an isolated lifestyle,’ he said, adding that several of the children “had not been taken up in the birthing register”.

Initial reports said that the man was the father of the six adults. However, according to Mr de Groot, police had since learned he was not, nor did he own the farmhouse.

Police said on Twitter they had arrested the 58-year-old for failing to help with their investigation.

“Yesterday someone reported to us [that they were] worried about the living conditions of people in a house in Buitenhuizerweg in #Ruinerwold,” they wrote. “We went there.”

“We still have many unanswered questions.”

Ruinerwold, which has a population of 3000, is in a rural area in the Netherlands’ north.

The farmhouse was hidden behind a row of trees and its windows had been boarded up. The family apparently lived off a vegetable plot and a few animals.

Locals told RTV Drenthe they saw a man drive past the house daily.

Nobody seemed to know who he was, so he was given the nickname “Joseph the Austrian”.

“You only had to get close to the yard and he already sent you away. He was watching everything with binoculars,” one told RTV Drenthe.

The local postman told the Algemeen Dagblad news website he had never delivered a letter to the house.

“It’s actually pretty strange, now I come to think about it,” he said.

Another neighbour said the gate to the farm had always been locked.

They said they tried to look into the yard with another neighbour but saw a camera hanging from a tree so didn’t try to go back.

Mr de Groot said the siblings’ mother died before they moved into the farmhouse years ago.