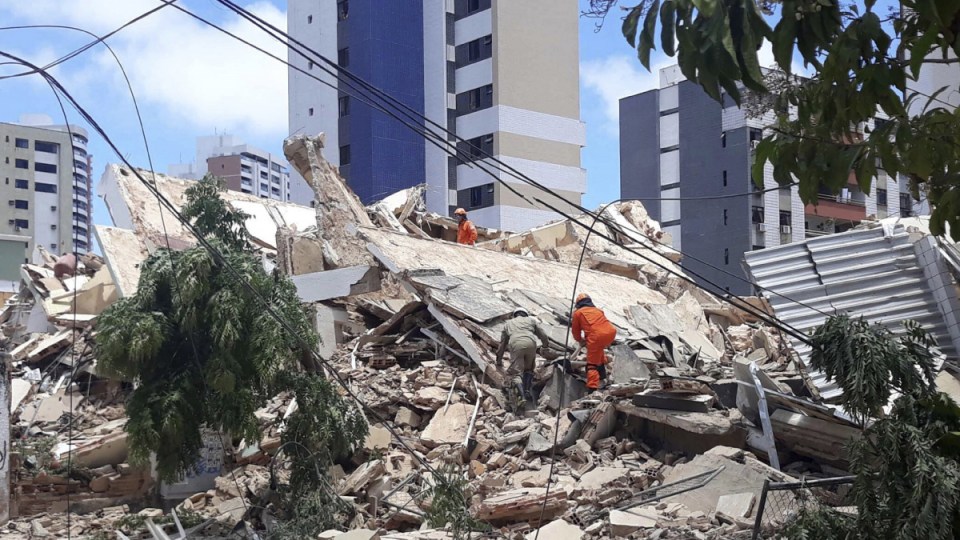 Firefighters search for people who are trapped after a building collapsed in Fortaleza, Ceara state, Brazil. Photo: AAP

Rescuers are in a race to find survivors after a seven-storey apartment building collapsed into a pile of rubble in Brazil.

One person was killed, five were found alive and it is estimated another 10 people are still missing, feared trapped under the mass of concrete.

Firefighters said some people who had been buried alive used mobile phones to direct rescuers to their location.

However the rescue effort remains risky due to the possibility of further movement, emergency responders warned.

The dramatic building catastrophe occurred in an upscale neighbourhood of Fortaleza on Tuesday.

The apartment block  – which a resident said was about 40 years old – crumbled at around 10:30 am local time, but it was not immediately clear what caused the accident or how many total victims may be involved.

Fire brigade and civil defence were not immediately available to provide further details.

Videos posted to Twitter reveal the aftermath, with a cloud of billowing dust obscuring where the residential building once stood.

Television footage showed a handful of rescuers in orange suits digging through a massive pile of wreckage in a middle class area of Fortaleza, the capital of Ceara state.

According to G1 news website, pedestrians who were passing by the building when it collapsed were taken to nearby medical clinics and access to streets surrounding the wreckage were closed by authorities.

There were reports of a puppy pulled out alive.