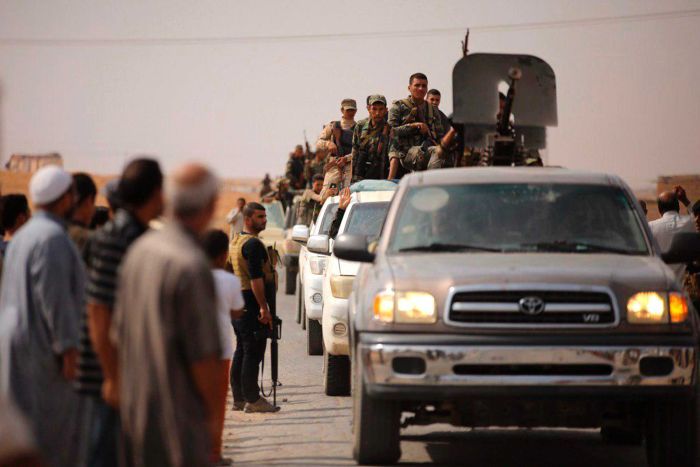 Syrian government soldiers and militia are expected to show little regard for anyone connected with IS. Photo: AP

Two Australian women held in Syria have made desperate pleas for help as a notorious army closes in.

“Until now Australia hasn’t done anything for us,” sobs one young mother of two children.

“And we understand the world has hate, but we’re asking just as regretful humans, don’t let us fall into the hands of the regime, please.”

She’s among more than 60 Australian women and children living in the vast al-Hawl camp for relatives of Islamic State members.

Syrian government soldiers and militia are moving in as part of a deal to protect Syria’s Kurds, but they’re expected to show little regard for anyone connected with IS.

Syrian government troops crossed into Kurdish-controlled territory after a deal was struck to protect the Kurds from a Turkish invasion.

They entered frontline towns yesterday in the back of lorries, cheered on by some locals.

The Assad government executes IS prisoners and no-one is sure what it will do to the group’s women and children.

“Don’t let us fall into the hands of the regime. If this happens, Everybody in the world knows the war crimes this guy does.

The audio was provided to the ABC by Kamalle Dabboussey, the father of one of the women in the camp.

The camps holding the IS women were always unstable but since Donald Trump cleared the way for Turkey’s invasion they’ve become chaotic.

Another woman in al-Hawl, Sahra Ahmad, sent this message to her sister.

“I’m so scared, I don’t know how much longer I can do this for. They just found a woman’s body in the toilets, she was all mutilated.”

Zara Ahmed has been living in a tent in al-Hawl with her three young boys since the fall of IS’s caliphate in March.

Zara’s sister Sonya Abbas urged Australian officials to help the women and children before they were captured by the Assad regime.

It’s unlikely there’ll be a rescue effort — the government wouldn’t send in a team to collect the women and children when north-east Syria was reasonably stable … and now the region is a war zone.

Sonya Abbas said all she needs is a letter from the government consenting to their release and she’ll go in and get them.

She’s already gone into al-Hawl several times to see Zara and her niece and extended family. She has ten relatives in the camp — including six children.

“It’s very very concerning. Maybe a week or two ago we could have had them out of there, or out of danger, now it’s become more complicated, even though we probably can get them out,” she said.

The situation in Syria is deteriorating. Turkey is advancing on several major towns and has killed dozens of civilians with artillery, rockets and snipers.

Turkish-backed militias have filmed themselves executing at least two prisoners.

Despite Donald Trump’s assertion that he wasn’t abandoning the Kurds, the US is withdrawing its remaining 1000 special forces soldiers from Syria.

It’s also getting harder to find out what’s happening: most foreign journalists in north-east Syria pulled out yesterday ahead of the advancing Syrian government troops. Journalists caught by the regime are detained.

Australian women plead for help as Syrian army closes in