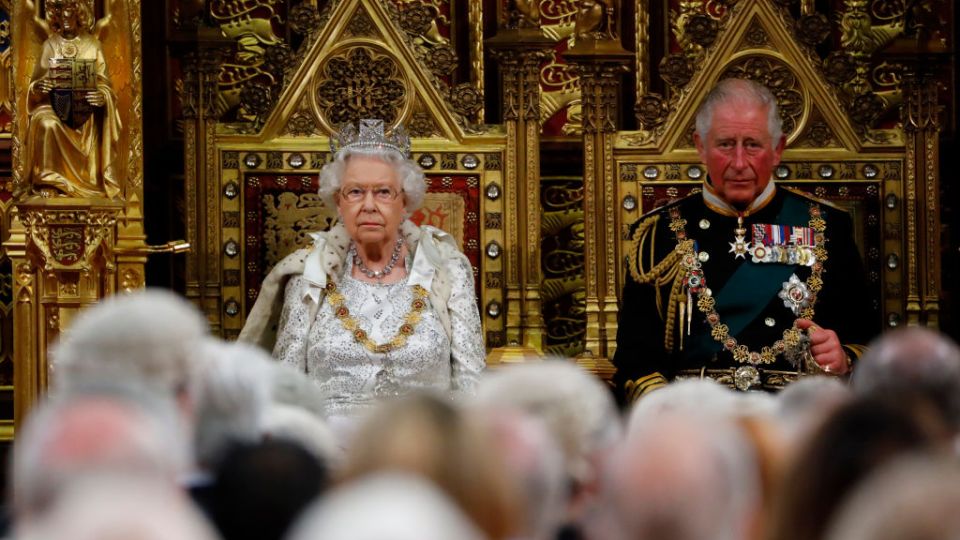 Britain's Queen Elizabeth II takes her seat on The Sovereign's Throne in the House of Lords next to Prince Charles, Prince of Wales. Photo: Getty

A bejeweled Queen has effectively delivered Boris Johnson’s campaign speech as she formally re-opened parliament in a morning of pomp and pageantry.

As the Brexit deadline looms, and with the possibility of a snap election, the prime minister has been accused of misusing the politically neutral Queen to set out his re-election agenda.

During the elaborate spectacle of diamonds and silk, Queen Elizabeth II is made to deliver a speech written by the government, which this time has been likened to the monarch delivering Mr Johnson’s stump speech because of the timing of a possible election.

The ceremony began with a horse-and-carriage procession from Buckingham Palace to Westminster before MPs were summoned to Commons with Mr Johnson and grim-faced Opposition leader Jeremy Corbyn parading side by side.

Afterwards Mr Corbyn slammed the government’s agenda, as outlined in the speech, as “a farce”.

The Prime Minister promised that this Queen’s speech would dazzle us,” the Labour leader told parliament.

“On closer inspection, Mr Speaker, it is nothing more than fool’s gold.

“There has never been such a farce as a government with a majority of minus 45 and a 100 percent record of defeat in the House of Commons, setting out a legislative agenda they know cannot be delivered in this Parliament.”

As she read out an overview of bills from The Sovereign Throne, the Queen said it remained the British government’s priority to leave the European Union on October 31.

The 93-year-old monarch set out Mr Johnson’s plan to “work towards a new partnership with the European Union, based on free trade and friendly cooperation”.

Mr Johnson has previously indicated he wants to strike an exit deal this week to allow an orderly departure however the EU is picking over the detail and has warned it could spill into next week.

The Queen has delivered the speech, which marks the start of the parliamentary year and gives the government the chance to highlight its priorities, 65 times.

This is the 65th occasion on which Her Majesty has opened Parliament – every year of her reign except 1959 & 1963 (whilst pregnant).
📷The Queen, accompanied by The Duke of Edinburgh, is pictured in 1958, the first time in history the #StateOpening was televised. #QueensSpeech pic.twitter.com/5erhtbpiKx

But with an election on the horizon, many of the measures are unlikely to pass through parliament, making the speech more of a warm-up for the new poll, offering a glimpse of the issues that will shape the Conservatives’ election strategy.

Following are some of the main policy statements included in the prime minister’s manifesto:

The government intends to lead Britain out of the EU on Oct. 31, adding it remains “committed to securing a deal with the EU and negotiating an ambitious future relationship, based on free trade and friendly cooperation”.

The government reiterated its commitment to removing the so-called Irish backstop and implementing a new protocol to ensure no return to a hard border between the British province of Northern Ireland and EU member Ireland.

It offered little detail on its plans, which are now subject of intensive negotiations in Brussels. EU diplomats say a full agreement is unlikely this week, indicating that the bloc wants more concessions from Mr Johnson.

The government proposes a new points-based immigration system based on people’s skills and contributions to the UK. This aims to bring “an end to free movement in UK law”.

It also says EU citizens arriving after January 2021 will be subject to the same UK immigration controls as non-EU citizens, “to enable the government to deliver a single global immigration system based on people’s skills”.

For the first time, environmental principles will be enshrined in British law and legislation will create new legally-binding environmental improvement targets.

A new independent regulator will be established in statute to scrutinise environmental policy and law, investigate complaints and take enforcement action.

The government’s proposals aim to ensure the most serious violent and sexual offenders spend more time in prison to match the severity of their crimes.

They also want to tackle repeat and prolific offenders through robust community orders.

Funding to the National Health Service increase 33.9 billion pounds ($63 billion) per annum in the NHS budget by 2023-24.

The government will bring forward a National Infrastructure Strategy later in the autumn to set out a long-term vision to improve the nation’s digital, transport and energy infrastructure.

The strategy will be aimed at helping to close the productivity gap between London and other parts of the country.

It will also be aimed at addressing the critical challenges posed by climate change and build on the UK’s commitment to achieving net zero emissions by 2050.

The government plans legislation to bolster Britain’s role as an international financial centre after Brexit by “enhancing” the sector’s competitiveness, but without eroding “world-leading regulatory standards”.

Specific aims would include making it simpler for foreign investment funds to be sold in Britain, a commitment to applying bank capital rules agreed globally to date, and ensuring that financial firms in Gibraltar have long-term access to Britain’s market.

The government plans to toughen its powers to block or intervene in the foreign purchase of any company in any sector that could affect national security.

Until now the British state has been able to intervene in the foreign takeover of any company above a certain size that played a role in national security, the provision of media plurality or the stability of the financial system.