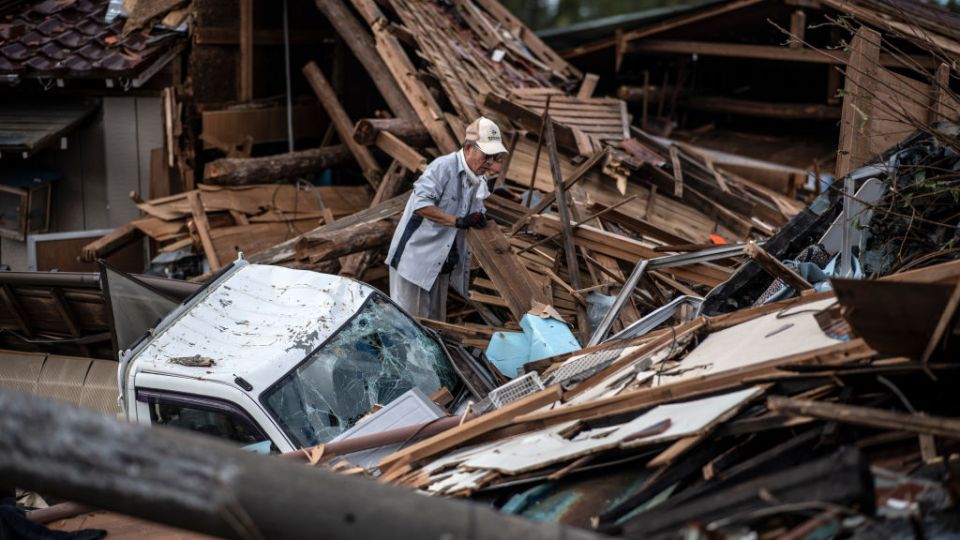 The death toll from Typhoon Hagibis in Japan has risen to 66, with hopes fading of finding the missing. Photo: Getty

The death toll in the worst typhoon to hit Japan for decades climbed to 66 on Tuesday as rescuers slogged through mud and debris in an increasingly grim search for the missing and as thousands of homes remained without power or water.

Some 138,000 households were without water while 24,000 lacked electricity, a far cry from the hundreds of thousands without power just after the storm, but cause for concern in northern areas where the weather is starting to turn chilly.

The highest toll was in Fukushima prefecture north of Tokyo, where levees burst in at least 14 places along the Abukuma River, which runs through a number of cities in the agricultural prefecture.

At least 25 died in Fukushima, including a mother who was caught up in flood waters with her two children, one of whose death was confirmed on Monday while the other, a little boy, remained missing.

Thousands of police, fire officials and military personnel continued to search for people who may have been cut off by floodwaters and landslides set off by the storm, with hope diminishing that the missing would be found alive.

Japan counts the cost after Typhoon #Hagibis . Maps and satellite imagery show the trail of destruction left by one of Japan’s worst storms in decades. https://t.co/ZhYCtGb6B3 pic.twitter.com/EOCwIRvYQN

Survivors described how waters rose rapidly to chest height in roughly an hour and mainly at night, making it hard to escape to higher ground.

Many of the dead in Fukushima were elderly, NHK said.

“I couldn’t believe it, the water came up so fast,” one man in Fukushima told NHK.

Though the threat of rain is expected to diminish on Tuesday, temperatures are likely to drop in many areas later this week, in some cases to unseasonably low temperatures, NHK said.