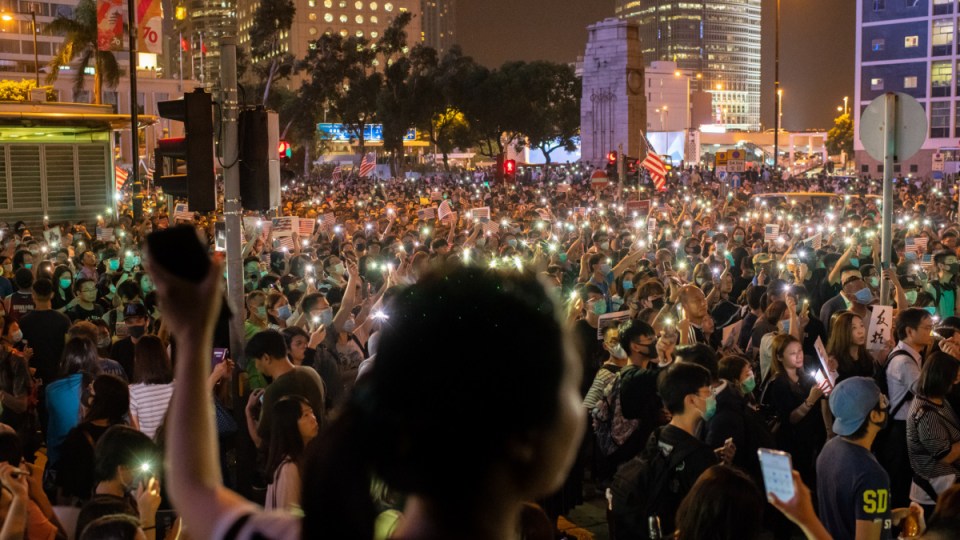 A homemade, remote-controlled bomb intended to “kill or to harm” riot police was detonated as they deployed against renewed violence in Hong Kong over the weekend, officers have said.

The “loud thud” on Sunday night close to officers who had been clearing away a protester-built road block marked the first known use of an explosive device during protests that started in June over a contested extradition bill and have snowballed into an anti-government, anti-police and anti-China movement.

“It exploded less than two metres away from a police vehicle. We have reason to believe that the bomb was meant to target police officers,” deputy commissioner Tang Ping-keung said at a news conference on Tuesday.

Despite spiralling violence, widespread vandalism and petrol bomb attacks by black-clad protesters, and repeated government appeals for people not to take their side, the protest movement is still rousing support from demonstrators, broadly worried about the future of the semi-autonomous Chinese territory and its freedoms.

A peaceful rally in central Hong Kong’s business district on Monday night drew a crowd of tens of thousands, but organisers put the number at 130,000, many waving US flags.

The rally appealed for the US Congress to press on with legislation that would require the secretary of state to annually review Hong Kong’s special economic and trade status, providing a check on Beijing’s influence over the territory.

The majority of demonstrators wore face masks, a practice first adopted by many to protect their identities amid profound distrust of the police and government, but now also a symbol of dissent since Hong Kong’s leader, Carrie Lam, made the wearing of masks at rallies punishable by a year in jail.

Widespread defiance of the mask ban and the solid turnout for Monday’s rally suggested Lam’s government is making little headway in its efforts to get demonstrators to turn their back on the movement’s more radical and destructive hardcore.

Tang said violence against police has reached “a life-threatening level”.

“If members of the public continue to remain silent and condone and tolerate such behaviour they will go from bad to worse,” he said at a news conference.

No casualties were reported from the detonation on Sunday night on a usually busy thoroughfare in Kowloon that was among dozens of protest hotspots.

“There was a loud thud,” said Chin-chiu Suryanto, an officer with the police force’s bomb disposal unit and showed a photo taken from a police vehicle dash-cam of a blurry spot of light.

“The intent (was) to kill or to harm the police officers at the scene,” he said, although he added the explosion was “not a very strong” one, leaving burn marks.

Police said they arrested 201 people, aged 14 to 62, on Saturday and Sunday, while 12 officers were injured, one of them slashed in the neck with a sharp object, severing a nerve.

Rioters also set a police vehicle on fire with a petrol bomb and threw more than 20 bombs at a police station.