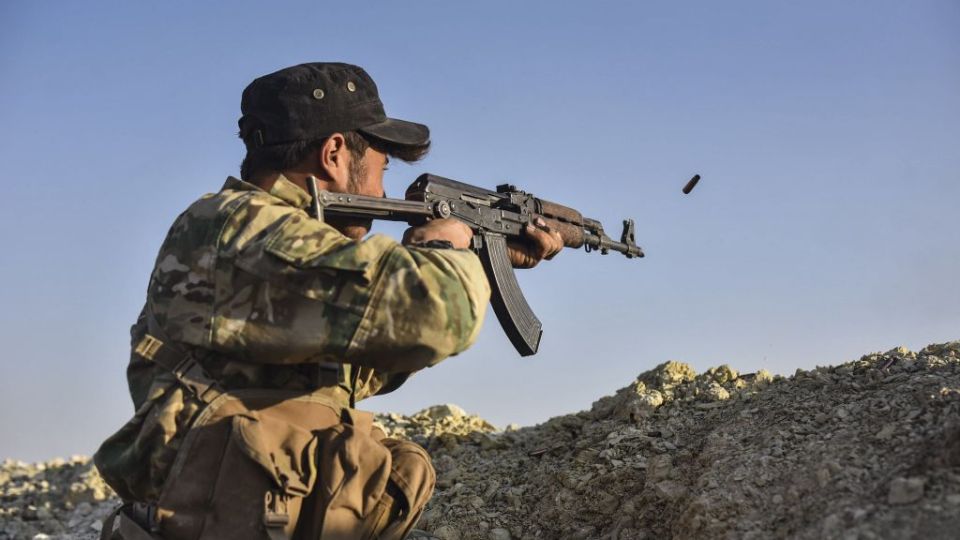 The Syrian National Army will deploy along the border to counter Turkey's "aggression". Photo: Getty

Syria has begun a major push-back against Turkey’s incursion as the US hastened its troop withdrawal while considering a complete pull out.

The Syrian army is set to deploy along the entire length of the border with Turkey to help the Kurdish-led Syrian Democratic Forces (SDF) counter Turkey’s “aggression”.

It comes as the US considers withdrawing the bulk of American troops from northern Syria in coming days, two US officials have said.

The plan represents a faster-than-expected timeline for the US pullout amid Turkey’s escalating offensive.

Meanwhile a Turkish air strike on a convoy in the Syrian town of Ras al Ain has killed 14 people, including five civilians, and wounded 10, the Syrian Observatory for Human Rights says.

Several foreign journalists were with the convoy when it was struck, according to a reporter from French broadcaster France 2.

Syria has struck an agreement with the Kurdish-led administration in northern Syria over the new border deployment which also aims to ‘liberate” areas from Turkey.

“In order to prevent and block this (Turkish) assault agreement has been reached with the Syrian government – whose duty is protect the borders of the country and to protect Syrian sovereignty – for the Syrian army to enter and deploy along the length of the Syrian-Turkish border,” Sunday’s statement said.

Kurdish-led forces have established control over swathes of eastern and northern Syria since the country descended into civil war in 2011, setting up their own governments but always saying their aim was autonomy rather than independence.

Despite mutual enmity between these Kurdish groups and Damascus, where the Baathist government systematically persecuted Syrian Kurds, the SDF has seldom clashed with the Syrian government during the war.

The sides have also at times appeared to co-ordinate military campaigns against shared enemies, notably the Turkey-backed rebels taking part in the offensive with the Turkish army.

US Defence Secretary Mark Esper announced earlier on Sunday he was acting on orders from President Donald Trump to begin a deliberate withdrawal from northern Syria, where the United States has around 1000 forces.

Mr Esper did not elaborate on the timing of the withdrawal, saying only that he wanted it to be done “as safely and quickly as possible”.

The two US officials, who spoke to Reuters on condition of anonymity, said the United States was looking at several options but added it appeared likely the military would pull the majority of its forces in the coming days, instead of weeks.

A full withdrawal could take two weeks or more, although even that could happen faster than expected, one official said.

The disclosure of the fast-paced withdrawal caps off a dramatic week of policy upheaval on Syria, which was once the heart of the Islamic State militant group’s so-called caliphate.

It began last Sunday when Mr Trump decided during a call with Turkey’s President Tayyip Erdogan to remove a small number of US forces from northeast Syria.

The decision was lambasted by Mr Trump’s critics, who say it opened the door for a Turkish offensive three days later against US-allied Kurdish fighters.

The abrupt US withdrawal from Syria – without any negotiated, diplomatic solution there – is widely viewed as a foreign policy defeat for the United States, which failed to halt an offensive by NATO ally Turkey against America’s main ally in Syria in the war on Islamic State.

The US says it will not defend the Syrian Kurdish forces from Turkey and Turkish-backed forces, even though the Kurds fought alongside American forces against Islamic State and are guarding prisons holding tens of thousands of the militants.

Women affiliated with IS and their children fled en masse from a camp where they were being held in northern Syria on Sunday after shelling by Turkish forces, the region’s Kurdish-led administration said.

Mr Esper, speaking in a television interview, said he expected the Syrian Kurds would seek to ensure their survival by turning to America’s rivals in Syria’s conflict – Russia and Syrian President Bashar al-Assad.

“There’s every expectation that the … Syrian Kurds would cut a deal with the Syrian and Russian forces,” he said.

Syria fights back as US considers complete troop withdrawal