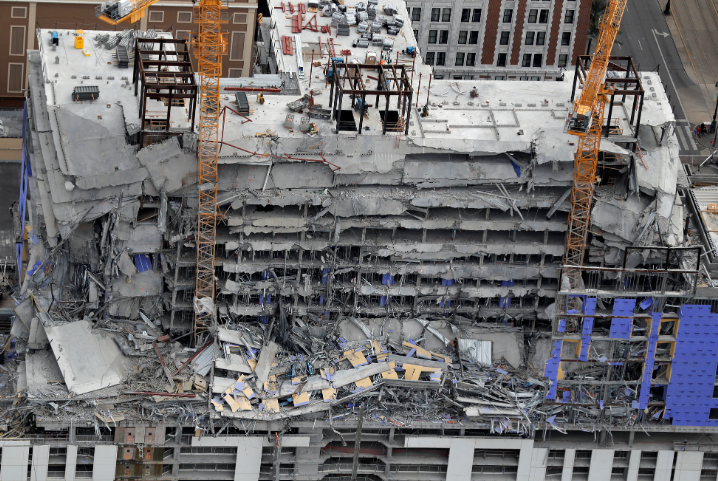 A Hard Rock Hotel under construction in New Orleans has collapsed, leaving at least one person dead and three unaccounted for.

Nearby buildings were evacuated and officials said the building and a 82-metre construction crane still looming over the site were considered unstable.

It was not immediately clear how that would affect search and rescue efforts. A drone was flown over the site to help authorities assess the situation.

WWL-TV aired and tweeted a viewer’s dramatic video of Saturday’s collapse, showing upper floors falling on top of each other before one side of the building toppled to the ground.

Evacuees included guests at a hostel across the street from the damaged building.

“I heard a huge noise and thought it was a plane crashing. Then, the hostel shook,” guest Sue Hurley, 68, told The Associated Press.

Authorities said 18 people were taken to a hospital for treatment. All were considered stable.

Governor John Bel Edwards visited the scene and urged people to stay away from the area.

Melania Trump: Bombshell revelations about what she did during US Capitol riot
Retailer pauses facial recognition tech trial after privacy complaint
Donald Trump grabbed at steering wheel in bid to get to Capitol riot
Two charged over US migrant truck deaths
Governor-General admits ‘mistake’ over Insta ad endorsement
Hundreds of hives destroyed in bee mite eradication effort
Four slain as a barrage of shots ring out in illegal New York casino
Today's Stories