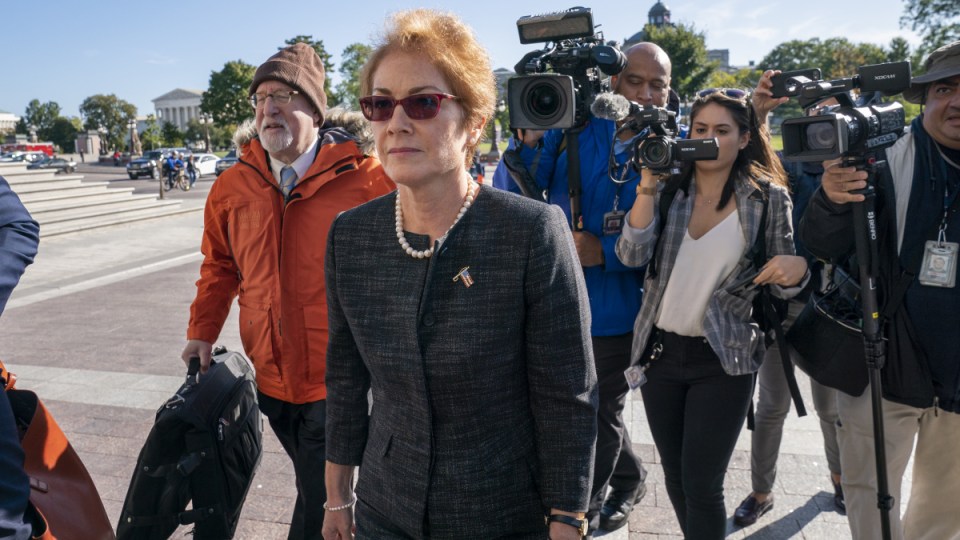 Former U.S. ambassador to Ukraine Marie Yovanovitch complained about a campaign to get rid of her. Photo: AAP

Impeachment momentum has gained pace with claims Donald Trump pushed to oust his ambassador to Ukraine even though the State Department believed she had “done nothing wrong”.

Former ambassador Marie Yovanovitch says she was “abruptly” recalled from her foreign post in May after insisting that discussions between the two countries go through official channels.

The revelation comes as a senior adviser to US Secretary of State Mike Pompeo resigned, as the controversy over the Trump administration’s dealings with Ukraine deepens.

Michael McKinley, a career diplomat who has served as Pompeo’s policy adviser since May 2018, said in a note to staff that his departure after 37 years with the department was “personal.”

While Mr McKinley has not been directly involved with Ukraine, he has served as a conduit between Mr Pompeo’s office and career staff, according to the Washington Post, which first reported his resignation on Thursday night.

In a closed-door deposition, Ms Yovanovitch described a lengthy campaign to get rid of her and warned that private influence and personal gain were tainting US foreign policy.

The 33-year veteran of the foreign service said she was told by an official that there had been a “concerted campaign against me” and that Mr Trump had pressured officials to remove her for almost a year.

“Although I understand that I served at the pleasure of the president, I was nevertheless incredulous that the US government chose to remove an ambassador based, as best as I can tell, on unfounded and false claims by people with clearly questionable motives,” Ms Yovanovitch wrote in the statement obtained by The New York Times and Washington Post.

Ms Yovanovitch appeared in Congress on Friday for a deposition in the Democrats’ impeachment inquiry, accepting lawmakers’ invitation to testify despite Mr Trump’s declaration that no one in his administration would co-operate with the probe.

Mr Trump’s personal lawyer Rudy Giuliania recalled Ms Yovanovitch from Kiev despite having no official role in the US government.

The Democrats are probing Mr Trump’s dealings with the Ukrainian president from whom he sought a political favour which may have been a breach of the constitution.

The US president urged Ukrainian officials to investigate his political rival Joe Biden and his family and to probe Ukraine’s involvement in the 2016 presidential election.

Ms Yovanovitch was removed from her post after insisting that Mr Giuliani’s requests to Ukrainian officials for investigations be relayed through official channels, according to a former diplomat who has spoken with her.

She is now a State Department fellow at Georgetown University.

Mr Trump said earlier this week that he would block all officials from testifying, saying the probe was unfair and “illegitimate”.

It was unclear if Ms Yovanovitch’s appearance signalled a shift in that strategy or if she was breaking with White House orders.

In his July 25 phone call with Ukrainian President Volodymyr Zelenskiy Mr Trump said Ms Yovanovitch was “bad news”, according to a partial transcript released by the White House.

Neither Mr Giuliani nor Mr Trump has publicly specified their objections to Ms Yovanovitch.

Businessmen with ties to Mr Giuliani lobbied a US congressman in 2018 for help ousting Ms Yovanovitch, according to an indictment made public on Thursday following the businessmen’s arrest.

It alleges the men leveraged a flurry of Republican political donations to force Ms Yovanovitch’s removal, an effort prosecutors say was aided by laundered foreign money.

The former diplomat who spoke with Ms Yovanovitch said the ambassador refused to do “all this offline, personal, informal stuff” and made clear that the US government had formal ways to request foreign governments’ help with investigations.

The former diplomat insisted on anonymity to disclose the private conversation.

Ms Yovanovitch was speaking to the House Intelligence, Foreign Affairs and Oversight and Reform committees behind closed doors on Friday.

Former Ukraine envoy accuses Trump of campaign to oust her