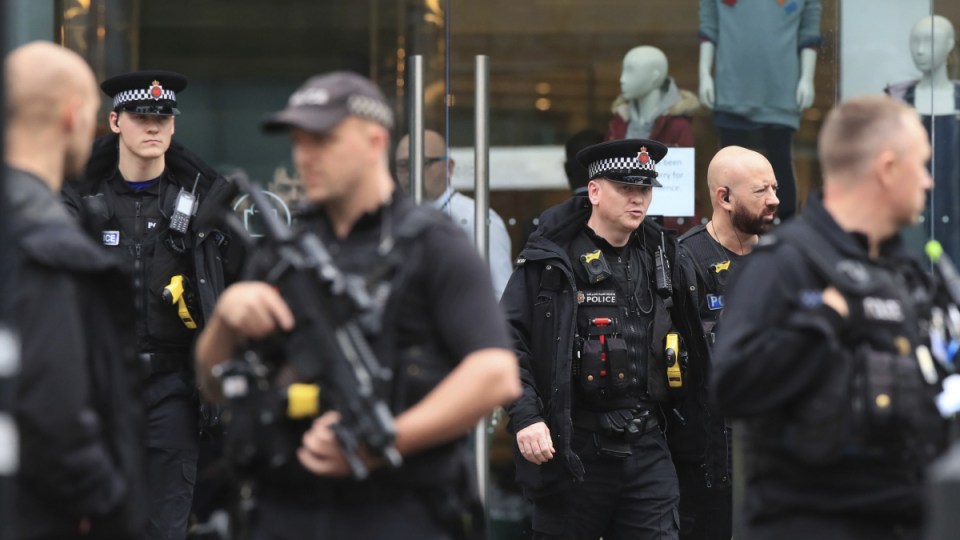 12/10/2019 12:00 Armed police officers outside the Arndale Centre in Manchester, England, Friday Oct. 11, 2019, after a stabbing incident at the shopping center that left several people injured and shoppers hidings in shops. Photo: AAP

Shoppers watched on in horror as a man armed with a large knife began attacking people inside a busy Manchester shopping centre.

Police said a Manchester man, 40, entered the centre about 11.15am on Friday local time and began lunging at shoppers.

Witnesses described scenes of horror and fear as shoppers sought refuge in stores, as the city was once again the target of an alleged terror attack.

The shopping centre is just a few hundred yards from the Manchester Arena where 22 people were killed in May 2017 when Salman Abedi detonated a suicide bomb following an Ariana Grande concert.

Freddie Houlder, 22, from Market Drayton, was in the shopping centre when he heard “a load of screams just outside” the shop he was in.

Selfless, unhesitating bravery in the face of lethal violence.

This here is police work.pic.twitter.com/gacKx2hjW8

Mr Houlder added: “Luckily she had quite a thick jacket – she thought originally it was a fake knife because of how easily it grazed off but police came in and said it was a real knife and she burst in to tears.”

Within five minutes, the man was challenged and detained by armed officers in a nearby street.

Assistant chief constable Russ Jackson, of Greater Manchester Police, said: “We do not know the motivation for this terrible attack. It appears random, is certainly brutal and of course extremely frightening for anyone who witnessed it.

“At this time we do not believe that there is anyone else involved in this attack but we will be constantly keeping this under review.

A man in his 50s, a 19-year-old woman and another woman were rushed to hospital with stab wounds. Their injuries are not believed to be life-threatening.

Police later said he was detained under the Mental Health Act following an assessment by specialist doctors.

British MP and Home Secretary Priti Patel posted on Twitter she was “very concerned by the incident” in Manchester.

“My thoughts are with those affected. I am, as always, very grateful to the police for running towards danger to keep us safe. Now important they are given space to carry out their investigation,” she said.

Last New Year’s Eve, three people including a police officer were seriously injured when a 25-year-old man launched a knife attack on passers-by.

He was arrested on suspicion of attempted murder and will face trial in November.

In 1996, the shopping centre was damaged in an IRA bomb attack in which a 1500-kilogram device loaded on a lorry was detonated on Corporation Street.

More than 200 people were injured in the explosion, although there were no fatalities.