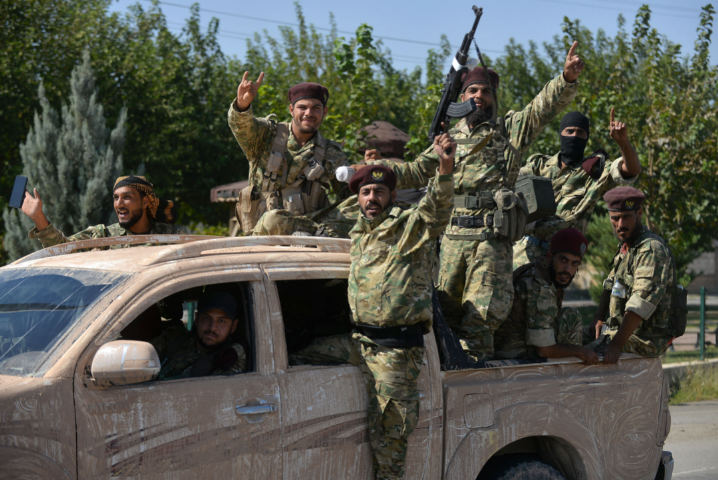 Kurds of the Free Syrian Army, which backed by Turkey, roll into Syria to confront fellow Kurds backed by the US. Photo: AP

Turkey is finding its invasion of Syria’s Kurd-held enclave harder going than it and military analysts anticipated, with besieged towns and villages offering stiff resistance.

As the offensive entered its fourth day and casualties mounted, an estimated 100,000 have fled the war zone and the government of Turkish strongman Recep Tayyip Erdogan became the target of mounting international  criticism.

British Prime Minister Boris Johnson has told Tayyip Erdogan that Britain has “grave concerns” about Turkey’s military action, which he said was undermining  “the progress made against Daesh,” a spokesman said after the telephone call between the two leaders on Saturday evening, referring to Islamic State.

“The Prime Minister was clear that the UK cannot support Turkey’s military action. ”

US forces’ withdrawal from the region, under direct orders from President Donald Trump, were not immune to the escalating violence.

Turkish-backed Syrian rebels have advanced into Ras al Ain in northeast Syria but it was unclear how far, with Turkey saying the town centre had been taken and Kurdish-led forces denying this.

An explosion was reported in northern Syria near an outpost where US troops are located, but none of the Americans was hurt, according to a US official and a Syria war monitor.

While unclear if the blast was the result of an artillery strike or an air attack, it was the first time a coalition base had come into the line of fire since Turkey’s offensive began.

Turkey, which had been promised it would be the subject of sweeping US economic sanctions if the invasion went ahead, was at pains to swear the installation had not been not deliberately targeted.

The Turkish Defence Ministry said its forces were returning fire after being targeted by Kurdish fighters about half a mile from the US outpost, and ended the strike after communicating with the US

Turkey said it captured more Kurdish-held villages in the border region, while a hospital in a Syrian town was abandoned and a camp of 4,000 displaced residents about 12 kilometres from the frontier was evacuated after artillery shells landed nearby.

The Islamic extremists claimed responsibility even as the city was being simultaneously shelled by Turkish artillery.

In another incident suggesting the ISIS remnants are reforming, a car bomb exploded by the wall of a prison holding several thousand prisoners — an apparent bid to breach the facillity and prompt a mass escape.

The war remained intact, which cannot be said for the White House confidence that ISIS is a spent force, too shattered to be revived.

The UN says markets, schools and clinics also were closed. Aid agencies have warned of a humanitarian crisis, with nearly a half-million people at risk in northeastern Syria.

In Sydney, protesters rallied in in the rain outside the Town Hall Sydney to demand an end to the Turkish military action.

Mr Trump cleared the way for Turkey’s air and ground invasion after he announced his decision to pull American troops from their positions near the border, drawing swift bipartisan criticism that he was endangering regional stability and risking the lives of Syrian Kurdish allies who brought down the Islamic State group in Syria.

Trump had said at the time that the estimated 1000 US troops were not in harm’s way from the Turkish offensive.

Rami Abdurrahman, head of the war monitor Syrian Observatory for Human Rights, said the US base was on a hill near the Kurdish-held town of Kobani, which had come under heavy Turkish fire.

US Defense Secretary Mark Esper said Washington is not abandoning its Syrian Kurdish allies and pushed back hard for Turkey, a fellow NATO member, not to launch the operation.

He said US troops are still working with Kurdish fighters.

Despite the criticism, President Erdogan said his country “will not take a step back” from its offensive, with government officials also vowing to “retaliate” against the US if sanctions are imposed.

“We will never stop this step. We will not stop no matter what anyone says,” he said in a speech Friday.

“Turkey is fighting with terrorist organisations that create a threat to its national security,” it said in a statement. “No one should doubt that we will retaliate … to any step that will be taken against this.”

US Treasury Secretary Steven Mnuchin said on Friday that Mr Trump had authorised US officials to draft “very significant” new sanctions, adding that banks were being notified.

The Turkish Defence Ministry said the operation was progressing successfully, although other sources said the war-hardened Kurdish fighters were refusing to surrender ground without contesting every inch of their homeland.

Turkey considers the Syrian Kurdish fighters to be terrorists linked to a Kurdish insurgency inside Turkey and says the offensive is a counterterrorism operation necessary for its own national security.

On the Syrian side, seven civilians are known to have have been killed since Wednesday, activists said.

Russian President Vladimir Putin said he doubted the Turkish army has enough resources to take control of prison camps housing Islamic State detainees, and he fears the captured fighters “could just run away,” leading to a revival of the militant group.

“We have to be aware of this and mobilise the resources of our intelligence to undercut this emerging tangible threat,” Putin said during a visit to Turkmenistan.

The Syrian Kurdish forces had been holding more than 10,000 IS members, but they said they are being forced to abandon some of those positions to fight the Turkish invasion.